(by Gerry Moss, June 2008)
The classic climb A Dream Of White Horses in Gogarth, Wales.

We headed over early for the Lakes trip, taking the HSS 11am sailing from Dún Laoghaire on the Thursday. Arriving at Holyhead in brilliant sunshine and anxious that every minute of such wonderful weather would be put to good use, we decided to climb right there on the Gogarth seacliffs. And what better place on Gogarth than Wen Slab. And what better climb on the slab than Dream of White Horses 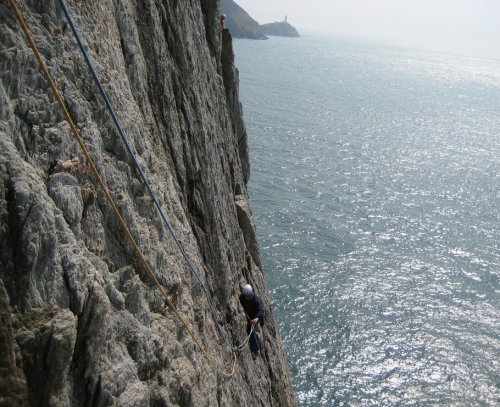 Only 15 minutes walk from the carpark, which itself is only 10 minutes from the ferry terminal, Wen Slab never fails to impress.

The big sweep of rock, the sense of isolation and exposure, all combine to create an unforgettable atmosphere. The protection on the first pitch is spaced, and the hanging belay a bit cramped, especially if more than two are in the party 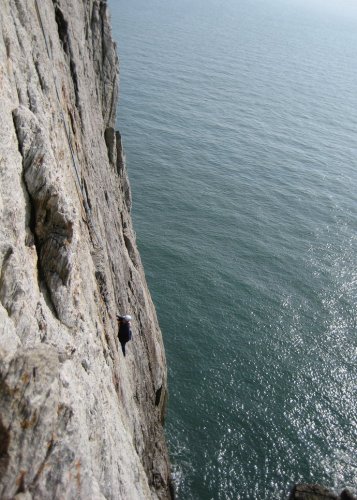 The second pitch, though more sustained than the first, follows a series of flakes, providing good handholds and adequate protection.

The third pitch, though technically the easiest, is potentially the most serious, as it traverses across above the roof of a huge cave, and a fall from anywhere along here would be serious for leader or second 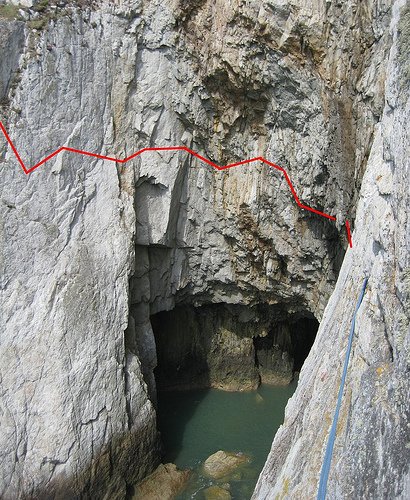 From the final belay point, the leader can look back to the last belay and the start of the last pitch, but most of the pitch is hidden from view, so careful rope management is the order of the day. The climbing is never more than 4C in difficulty, but the route has been aptly described as a VS in HVS surroundings, and all members of the party will need to be competent at that level, as only limited assistance can be given to the second at any point 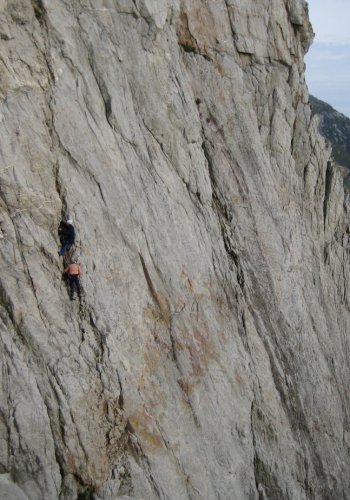 We made a slow, though uneventful ascent, with no hiccups. It was later than anticipated when we got back to the car and plans to drive all the way north to the Lakes were abandoned. We were too weary for that. All we needed was something to eat and somewhere to put the head down and get some sleep. To sleep, perchance to dream…