(by John Duignan, from IMC Newsletter Autumn 2003)
"Some see Switzerland as a soulless if beautiful place. Visit Zermatt and this cliché fast evaporates. I can think of no better way to chill out and come to earth after a climbing trip."

My companion sat glum the day’s car ride from Cervinia; we had planned on a traverse of the Matterhorn from the Italian side but found the route out of condition.

After our climb from the Swiss side, we arrived in Zermatt and find a mid August festival in full swing. The serious Swiss could even smile and even laugh!

Much to my rope-mate’s delight it was superb and an excuse for us to sneak to the front of the parade and get photos “for the children”! Groups in National Dress, Yodellers, old men proudly playing Alpenhorns passed by along with groups dressed as climbers of old and representing the local guide.

Zermatt is proud of its climbing heritage. Off the main street, behind the Catholic Church was a climber graveyard. It is quiet with the pedestrian-only street sound muffled by the stream below, the large church above and a generous planting of mature trees. In the distance is the ever-changing face of the Matterhorn. Its most famous monuments commemorate the four who died on the first ascent of the Matterhorn and the Taugwalder guides, father and son. 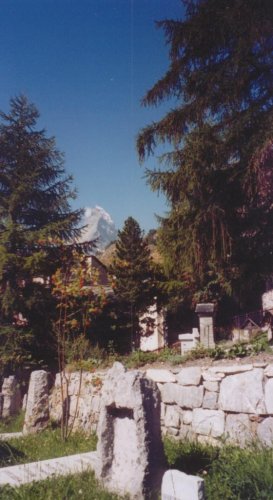 In keeping with how bitter the memory of the loss of his companion was, Whymper is not buried here but in Chamonix. It is a curious anomaly that his name alone of the first ascensionists is not commemorated in the graveyard. Here we see the family relationship of Hadow and Lord Douglas commemorated on a tombstone. Douglas’s body was never found and Reverend Hudson, a C of E. vicar was, later reburied elsewhere.

There are three rows of gravestones. While most of the deaths were on the Matterhorn, all the surrounding peaks are well represented. The youthfulness of the fallen is striking with most graves of climbers in there twenties. National styles emerge with a Teutonic stark style contrasting with gushing eulogies on the English gravestones (in memory of Freda Current who passed into fuller life at dawn on the Matterhorn aged 24 years”). A rusty ice axe protrudes from the 19-year-old New Yorker’s headstone, which reminds us that he “chose to climb”. 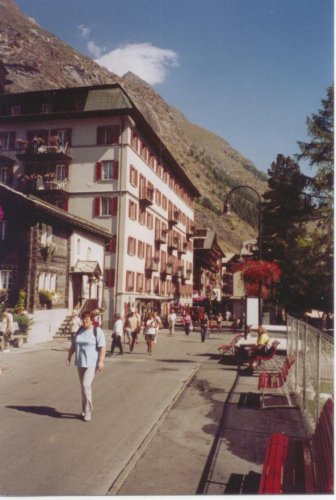 The buildings in the main street mainly date from the 1800s. Across the church, you can imagine Whymper and his party emerging from the Monte Rosa hotel as they set out on their ill-fated first ascent on the 13th July, 1865. Behind the hotel is the Alpine Museum, which will reward a visit. Its most famous exhibit is the rope that broke between the guide Taugwalder Senior and young Hadow, allowing four of the party plunge to their doom. The sash cord is barely six millimetres in thickness. Alongside this is a case with the pathetic remains found of the climbers. The shiny-soled leather boots of young Hadow contrast sharply with Lord Douglas’s nailed boots. A copy of the records of the official inquiry after the incident make interesting reading.

Reading Whymper’s account of the climb in his “Scramble amongst the Alps”, one could believe that the Taugwalders’ incompetence was the cause of the mishap. The race to beat Carrel surely blinded experienced climbers such as Hudson and Whymper to the obvious deficiencies in their party’s equipment. We read that the commission of inquiry’s conclusion was that no one person was to blame and perhaps this is fairer.

This gem of a Museum commemorates much more than the above and gives a tremendous insight into climbing in the region over the last centuries. It is manned by volunteers and their enthusiasm is touching.

Some see Switzerland as a soulless if beautiful place. Visit Zermatt and this cliché fast evaporates. I can think of no better way to chill out and come to earth after a climbing trip.

Leaving on the train that offer sole access to Zermatt, my friend’s broad grin reassures me that I was not alone in finding this detour worthwhile. We came to Zermatt by accident but look forward to coming back.