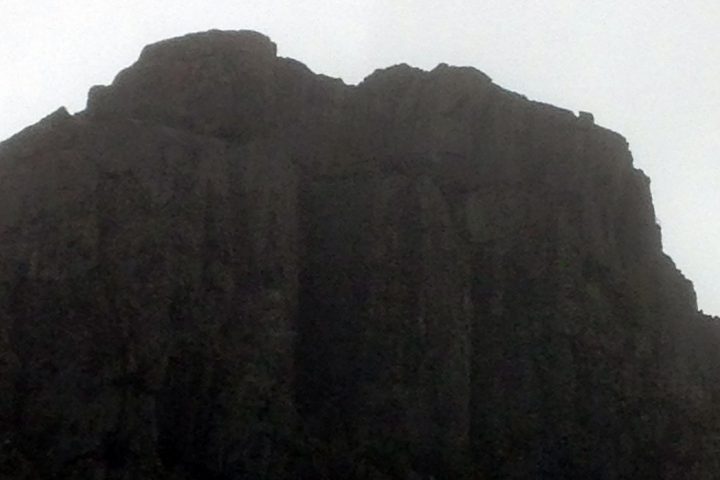 5am up, bags packed the night before. Breakfast consumed on the drive north to Dublin to meet Irishman and Englishman before catching the ferry to Holyhead. Second breakfast and coffee on the boat, where we met up with another two parties heading over to the IMC Wales meet. Guide books strewn over the table, discussion and anticipation of where to go and what to climb, Gogarth and the Pass being top of the list. We arrived in Wales to overcast skies and showers – not what was forecast. The parties went their separate ways for the day. Irishman was concerned by the wind strength and direction for Gogarth so we headed into the thickening cloud to the Pass, dropping our bags at the hut on the way.

Englishman was getting excited on the drive round and talk turned to the routes on the Cromlech: Left Wall, Cenotaph Corner, Cemetery Gates and Ivy Sepulchre, we should climb them all he exclaimed not able to choose between the four. Drizzle turned to rain, Englishman’s top lip began to quiver, his excitement drained by the worsening weather. We stopped at the boulders below the Cromlech and fingered the permanently dry but immensely steep routes, too hard for us. Down to Llanberis for tea and to devise another plan. The weather brightening towards the coast and time getting on it was decided that we would not have time to drive back to Gogarth or south to Tremadog. Enda another Irishman turned up making us a four, it had brightened slightly so we headed back to the Pass as time was getting on. 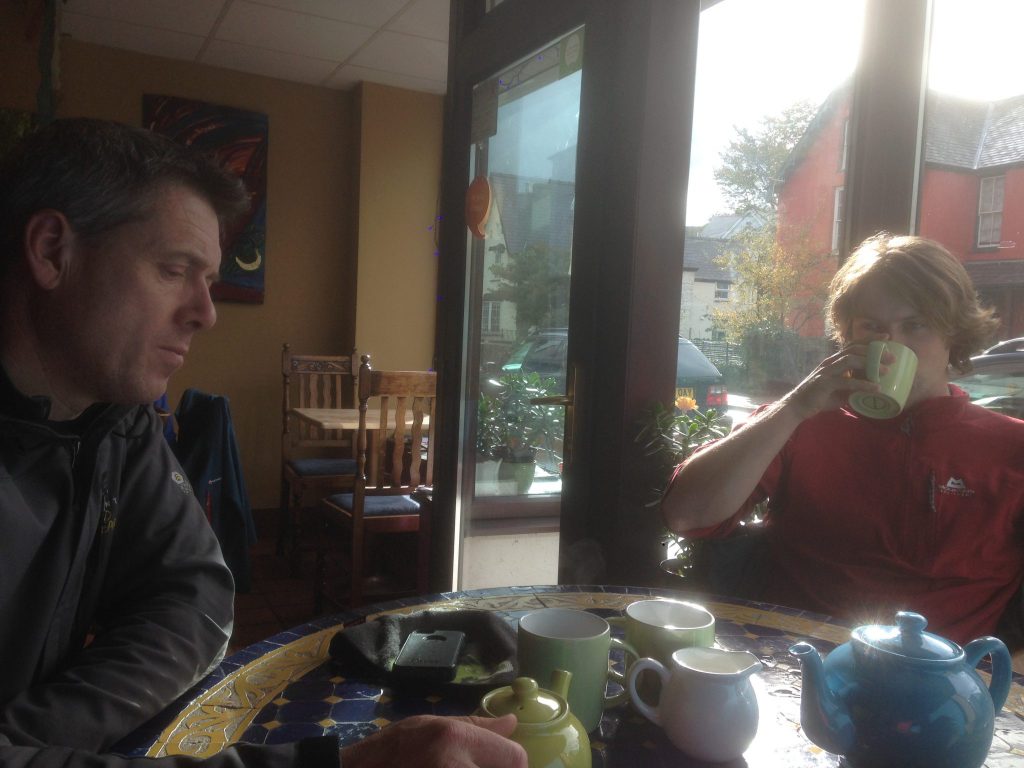 The rock still wet we geared up anyway. At least it had stopped raining and there were some V Diffs we could do in the wet. The wind picked up on the trudge up the slope, bringing with it some light drizzle. The two corners were soaking wet as was Left Wall, Cemetery Gates too hard to tell from a distance. Englishman made a beeline for the main corner on the Cromlech. With his stiff upper lip he proclaimed that we would climb Cemetery Gates his heart still set on climbing at least one of the four he had earmarked for the day. The two Irishmen opted for the slightly easier Spiral Staircase. We scrambled up the wet slabs to the base of the route, no queues today that was a certainty.

Englishman made steady progress on the initial ramp proclaiming it to be only hard severe, he reached the steep pull into the sculpted vertical groove “watch me here” the climbing getting notably harder at this point. Up he went gear and holds a plenty, some intestinal explosions helping to propel him upwards into the growing darkness. I looked out across to cars far below driving down the valley, headlights lighting up the road, only 4:30 the day foreshortened by the incoming cloud. Light rain again blowing sideways on to the cliff. Some more grunting and Englishman was on the girdle ledge 2/3 of the way up the route. I only have two extenders left he shouted down. Should I go on or belay? It’s up to you I retorted unable to see beyond the ledge he was stood.

Up I went the rhyolite providing plenty of unexpected holds by the way of side pulls. Hands cold but thankful for the four layers I was wearing, concentrating hard on my footwork due to the wet rock. I was soon up to the girdle ledge, forearms aching from the effort to grip the rock with numb hands. Englishman was still buzzing, eyeing up the steep final crack he offered me the lead. Personally I would have gone for the arête rather than up the finger crack to the slimy left slanting crack that led to the top. He was determined, this could be interesting I thought to myself. You can go on I said, he had wanted to do the route in one pitch so why deny him the vile looking crack.

Off he went, fingerlocks followed by hand jams resisting the temptation to cross to the arête he continued up to the slimy left slanting crack, no turning back now. More gear placed he started climbing the crack, body to the right of it with one foot sliding to get traction on the slimy rock. I struggled to see where he was going to go from here, at this stage he had accepted the crack was too wet to climb, presumably he had not appreciated this from the belay ledge. More grunting “watch me here” he was now between the crack and the arête, trying to keep it together just two meters from the top. His lip quivering once more he wobbled upwards letting out a yelp as he lunged for the arête. Somehow he latched something through desperation managing to stay on, whoops of relief as he topped out. He later found out that what he had been attempting in the rain was the Dirty Dick finish and the easy looking arête had been the line of Cemetery Gates.

I joined him at the top, by this point it was dark our head torches safely stowed in the tops of our rucksacks at the base of the route. We fumbled our way to the tree above Cenotaph Corner and managed to ab down to our bags in a oner. Head torches on scrabbling down the scree to the car, mountains of food at Pete’s Eats then back to the hut. We were joined by ten more IMC members at 2am in the morning having gotten the late night ferry across after work. 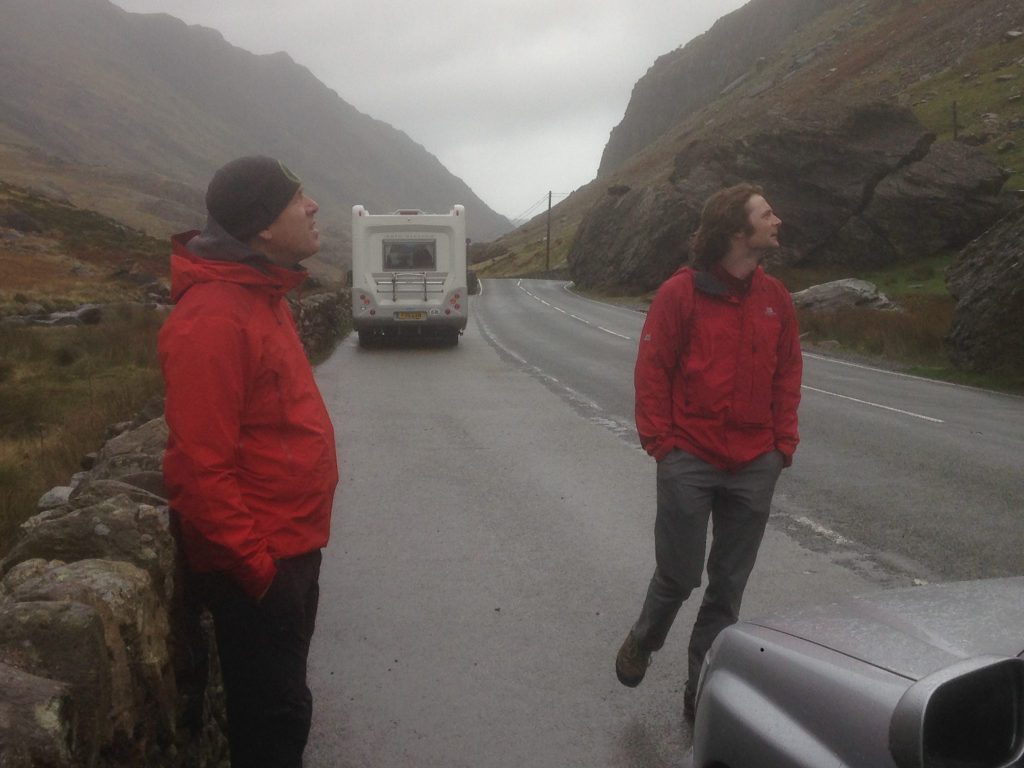 Saturday it rained until early afternoon so we opted for a walk up Tryfan and on Sunday we decided to head over to Tremadog as it had proved a better bet weather-wise for other parties who had climbed here the previous two days. I was with Irishman today as Englishman had had his fill and was off fulfilling his Training Officer duties with the new members. First route (One Step in the Clouds) of this wet weather in the mountains crag, it started to rain! I seconded up the first pitch in the rain to the now wet second pitch requiring delicate footwork on small holds, great. Your feet do stick in the wet, it’s all in your head, until you fall off, was what I kept telling myself. Crux pitch dispatched one easier pitch lead to the top. Down to Eric’s Café for tea and cake and to wait for the inclement weather to pass.

Brightening up and second route selected (Meschach) we wandered back up the hill. Having planted the fact that there was a peg at the crux Irishman was easily convinced to take the first pitch. Some intricate route finding across a slab he was at the belay. I’m pretty sure I would have found myself lost and off route so quite relieved in that respect. Off I went through the bulge and then a long pull up to the ledge with the peg, a delicate traverse from the peg lead to a rising traverse to the top. Irishman followed making friends with the peg ensuring it was seated well on his way past.

Final route of the day was to be The Plum, time was getting on. We climbed up to a buttress and managed to convince ourselves we were in the right place. I set off aware that I was running out of daylight. It was steep! I pulled through the initial bouldary crux at the start, perched above my gear puffing more than I should have been, doubt crept in, I had been in this position before. I opted to jump off before getting more committed. Transpired I was not even on the right buttress let alone the right route, oh well not the first time my eyes had picked the wrong line.

Monday turned out to be the best weather day, but we only had till early afternoon as we were on the 5pm ferry. We got sunny weather in the Pass and took some of the new climbers up some multipitch routes. The rite of passage of dropping gear on your first multipitch was achieved by most, all was retrieved so no harm done. It reminded me how much satisfaction you get from taking someone out to experience something new and challenging to them and was enjoyable to all new and old. Back to Pete’s Eats for some more low calorie diet food, then to the ferry. Englishman decided to have one last moment of excitement by flattening his car battery in the queue by having most electrical items on in his car whilst we waited. Some embarrassment later we were up and running again and on the rather choppy ferry home.

It was a most enjoyable long weekend and my first time climbing in Wales, something would have been wrong if it had not rained once at least every day.