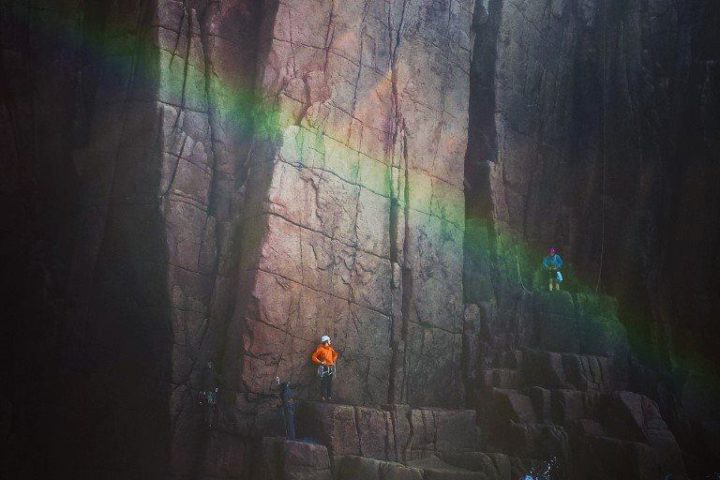 Last August I unexpectedly had the most amazing climbing experience. I was secluded with 10 crazy people on a tiny island off the West coast of Ireland. (Where there were five times more sheep than humans that typically inhabited it.) 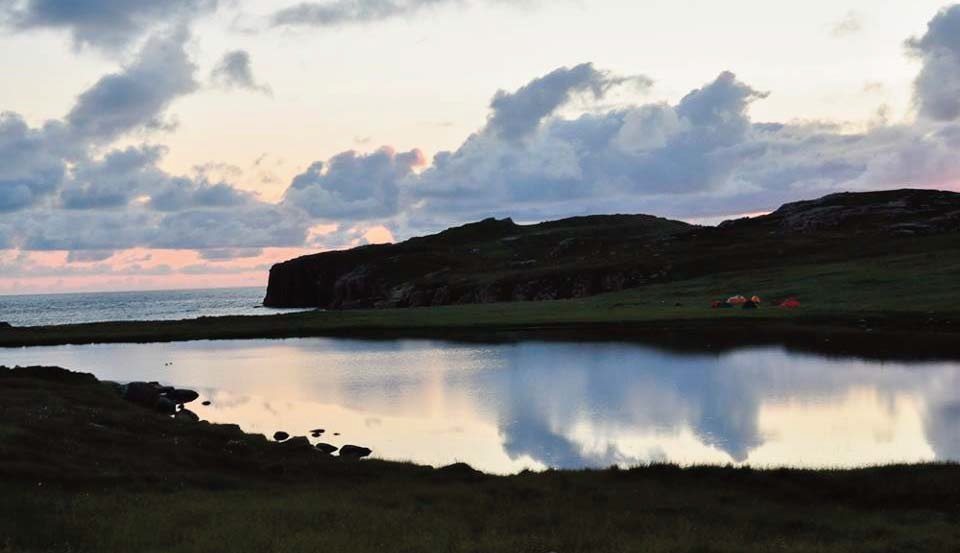 Before voyaging to Ireland I asked people, what should I do in this country? Many suggested to learn how to pour Guinness, see a fancy and historic book called “Kells”, look at cliffs, or tour the Game of Throne sites. But I thought, I wanted a different Irish experience. One of adventure, real beauty, and jubilant sheep.
With some online research and social networking in the Irish climbing community, I was blown away by how incredibly friendly and generous Irish climbers are. I had several invitations to climb around the country within a day of posting. Some meetings didn’t work out logistically, but one did. This meeting was described on a Facebook message to me as. . . outstanding rock climbing in a wild, remote and truly beautiful setting,” “no facilities except water” and “look for a short bald dude.” Sure, why not? Would this be a three-day, three-night nightmare where I’d be stuck on a remote, uninhabited island with strangers?

A friend suggested that as soon as I got there, I should ask the fishermen if I could use them as a potential emergency escape. It could have been a “Stranger Danger” disaster of a group of reckless or creepy people. But no, the team of mountaineers embraced me and encouraged me to grow. It was a once in a lifetime experience that I will never forget. This is the story of an American (me) wild camping and climbing with Irish mountaineers.

After a 4 hour drive from Dublin, we hopped onto a local fisherman’s dinghy boat. This was the start of our wild Gola Island Adventure.
As soon as we stepped onto the island we saw the only water source on the island (exclusive of the generous sky), and several abandoned homes and farming walls. At that point, I knew that we were in for a wild undertaking.
With every person carrying gear and food the weight of 2 middle school kids, we all thought “Did I bring too much beer/wine?” We trekked over the Heather, wet bogs and half-fallen rock walls. We set up camp next to the lake, trying to avoid the prevalent sheep poop, when possible. We ate by the beach fire pit and slept early. Tomorrow was the day we were going to crush it.

Day 1: Getting Acquainted to Gola’s Climbs

We started the first full day on a place called “Gripple Wall”. We were to abseil (or rappel as Americans would call it) down the sea cliff, to a ledge where the high tide crashed close to our feet. I was told to clip my ATC in and wrap a cord around what they called an “abseil rope”.
Then, James warned, “Do not freak out and squeeze the brake hand too hard or else you’ll fly down the 60 foot cliff.” Ok…noted. “Lean back and go!” I hope that there is more in this life for me. Here it goes… Creeping along inch by inch I peeked between my shaky legs into the crashing ocean waves below. There aren’t many things better than between-the-legs-ocean views and realizing that at that second, because of the kindness of others, you have become a better, more able person. 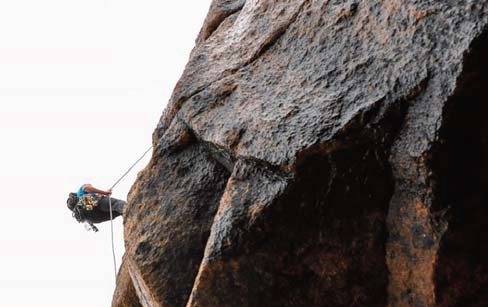 So if you had not already gathered, I quickly realized that I was not as ready as I should have been. What I was to encounter on Gola Island was quite different from my experiences in America.
Luckily, my new friends were amazing to help me tackle the challenges and get me up to speed on how to be an Irish Mountaineer. I’m going to say it again: the folks I met at IMC (and probably the entire Irish climbing community) are amazing. OK, I had just learned that Ireland is a trad climbing country. Trad climbing is when a person places little metal pieces between cracks in rocks in hopes that it will hold you 5, 20, 70+ feet in the air as you get your body up a cliff. The goal is to place these instruments in the right cracks at the right angle with the right width so that it does not come out and can be later ejected from the crevice by another climber.¬ This is so the rock stays pristine. It is a scary as feck concept. I guess for me this was as good of a day as any . . . 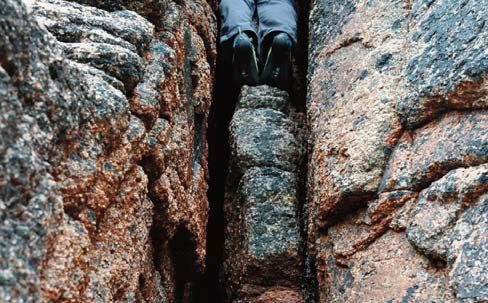 The rock was a grippy granite with large sugar-like granules. Our feet had a great time and could stand on anything. Our hands on the other hand were tentative and well worn and torn after use. Most routes had medium to large slopey crevices that you could jam a soon-to-be-bloody hand or finger in.
We all climbed several lovely routes on Gripple Wall. They included “Pride of Gola” (a fun journey around a corner with pretty ocean views to our left and right), “Jean A Cheval” (a narrow chimney with shimmying required) and “Gripple Wall” (an energizing climb up a straight rock ace).
From the work out, we were hungry so we took a quick walk back to camp for lunch. Unluckily for us, the grey clouds rolled in and started dumping rain on us. And with that the climbing day was over. At night we looked at four forecasts and were hopeful that the next day would bring sunshine and climbs. 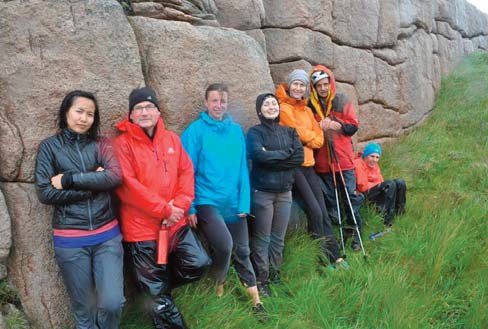 Boy were we wrong. The Irish rain kept coming throughout the day. Four unsuccessful expeditions later, we gave up trying to climb. The rainy day luckily wasn’t only of us laying in sleeping bags, looking at raindrops, talking to caterpillars, and contemplating life (though it did include quite a lot of that). It also included cooking feasts over a small flame, yoga on the beach, laughs, wine, treks with “National Geographic views” and swimming. Although we were antsy for more climbing, it was a pleasant time. 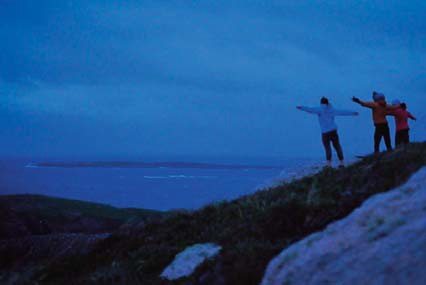 Day 3: This is Irish Climbing

We were grinning when we saw the morning sun. We knew that this was the day we all came out for. Out we ran (after eating a nice breakfast, of course) to find a dry rock, known as “Inland Crag”. After everyone crushed “Weathered Window” (a tricky bugger that required lots of high steps and trust in yourself ), we wanted more ocean views. 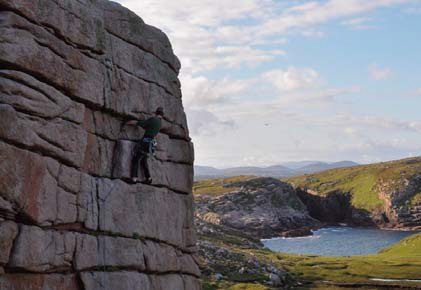 At “Main Walls” we ascended several excellent routes while trying to avoid the waves crashing by our feet. I think our collective favorite route was “Run of the Arrow” (a steady climb within a wellprotected groove). Our climbs were so enthralling that we asked the fisherman to pick us up later (so we’d get back home at midnight). Worth it! 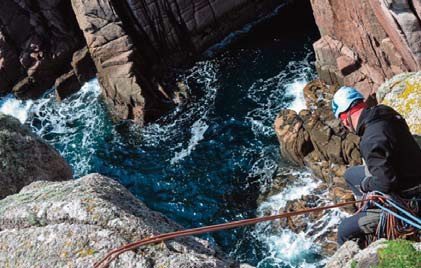 The IMC Gola Island Excursion was an unforgettable weekend of great company and adventure. The stars aligned and I got to spend three days and three nights amongst 10 batty Europeans roughing out what nature doled out for us. We rolled with its punches and trekked, snorkeled, yoga’d on the beach (and in a tent), and climbed some of the most amazing rocks we’ve all touched. Everyone was so kind and generous and rooted for everyone to do their best. Because of them I grew so much (and was able to be warm, dry, and safe). I learned how to abseil safely, trad climb, trad lead, and be a fecking awesome Irishmountaineer.