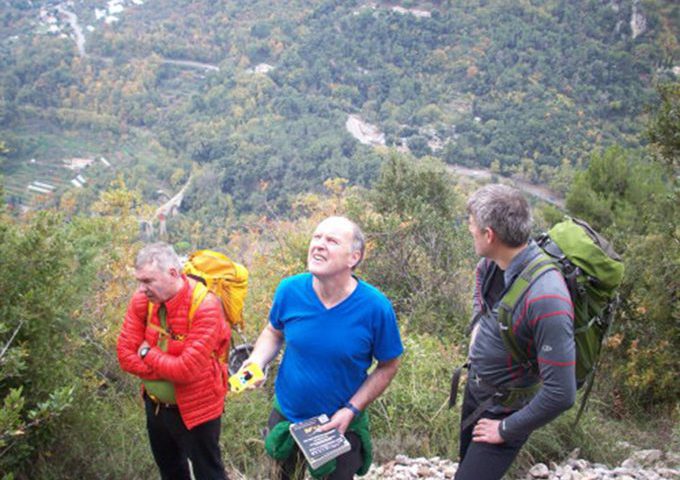 (by Peter Wood, December 2013)
Climbing in Nice November 2013 including an ascent of the thirteen pitch “La Malet ”

I have been to Nice a number of times in the last couple of years, graciously accepting the hospitality of IMC member and part time Nice resident Kevin Coakley on those occasions. Ian Christie had been with us on those meets, and we had with others sampled the climbing delights of areas such as La Turbie, Gorbio and the more famous Saint-Jeannet. Saint-Jeannet has a substantial array of sports climbing crags, but it also has a massive ‘baou’ or outcrop of rock. This Baou has a number of long multipitch routes up its main face. The one that had caught our attention in previous years was the 300 metre ‘La Malet’. First climbed on 23rd November, 1940, it was one of the first routes on the baou. It is a 13 pitch route that meanders its way backwards and forwards up and across the main face, with a few bolts placed at crux points. Guidebook time says 3 hours. 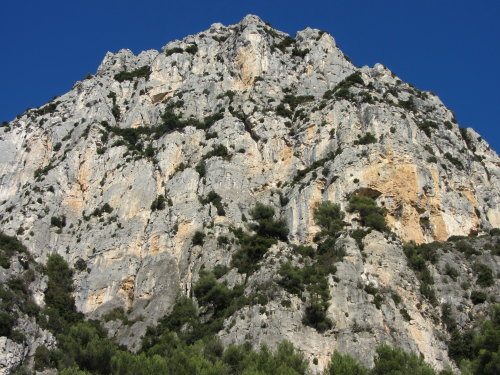 Last weekend, we were in Nice again, and on Saturday morning, we ventured up to Saint-Jeannet. The first thing we did was scramble up to the base of the La Malet, and had a look at the start of the climb. The first pitch seemed easy, so Ian and I scrambled further up, and easily reached the first belay point. ‘Easy enough’ I said to Ian. He agreed. Our fears and apprehensions were allayed. No problem there. We walked the long way back down and spent the afternoon sports climbing on the small crags around Saint-Jeannet. 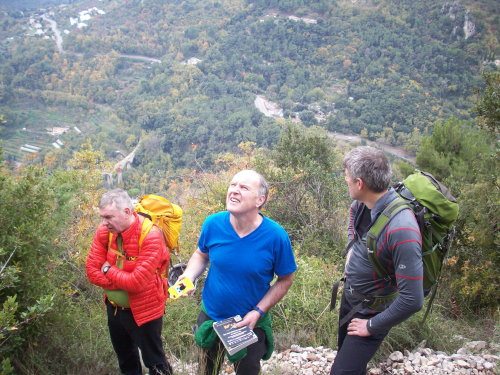 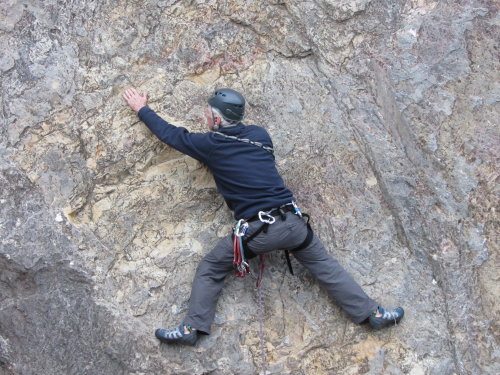 Sunday we got the bus to La Turbie, and walked down to the crag at Tête de Chien. We spent the day climbing in the autumn sun, on slightly polished limestone, looking down on the salubrious setting of Monte Carlo and Cap s’Ail. We went home early, knowing we had an early start the next day. 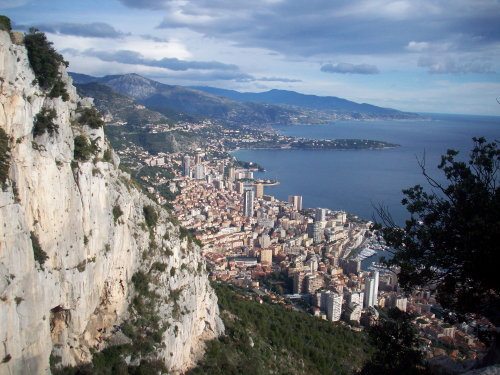 Next day was the big day. We set our alarms for 5:45, and caught the first bus on the promenade in Nice just as the dawn was beginning to appear on the eastern horizon. 8 o’clock saw us in Saint-Jeannet, and after a short walk and a 150 metre scramble up a steep gulley, 9 o’clock saw us at the base of the crag eating a second breakfast, putting on harnesses, and generally gearing up. I was to climb with Ian; Kevin was to bring up the rear with Barry. 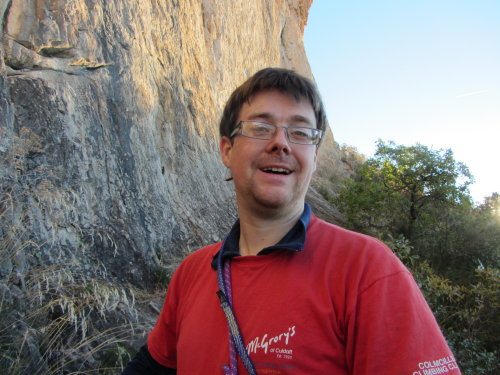 The first pitch was easy. The local guide rated it a 3. It was no more than a scramble. Ian led the second pitch. Rated 3+ in the guide, it was a little harder, but having polished off 2 pitches in a relatively short space of time, we reckoned the rest would be a walk over. I started into the 3rd pitch. It was rated a 3 in the local RF guide, but some accounts of the climb we had found on the internet rated it higher. I preferred to believe the local guide, but as soon as I started into the overhanging chimney, I realised the local guide was wrong. I didn’t know whether to try climb the outside of the chimney, or try to get into it. I chose the second option, and struggled to the top of the pitch. Ian came up behind me, glowing with perspiration and breathing heavily. Ian continued on up the 4th pitch, and as he investigated a perplexing move on the ‘letter box’, I had a good view down the chimney and was able to view the struggles of Barry (leading) and Kevin (seconding). Eventually both arrived at my belay stance, breathing heavily and making comments about the inappropriateness of carrying weigh on your back when trying to climb a chimney. I felt like making comments about carrying weight on your front! My self and Ian climbed the short pitch 5, and after some confusion, found the belay stance. I led off for the 6th pitch, and as we had done earlier, followed the polish and looked for a line of bolts. I moved right, looked up, and saw some bolts above. That’s where the climb goes, I thought to myself, so with a dubious sling around a tree, I aimed for the first bolt I could see. After a while I reached it. I looked up, and saw another bolt. It seemed suspiciously further away. I decided that backing off was not acceptable, so launched upwards towards it. I could also see another bolt, even higher and even further away, but put its vertical distance from me out of my mind and aimed for the one directly above me. Ian shouted something about a belay point above me and to the right. I eventually got to the bolt above me, and after some ‘Above protection’ manoeuvring, reaching the aforesaid belay point. ‘This is no good’ I thought to myself – everything above was overhanging, including the third bolt already mentioned. At this point retreat seemed an honourable option. Some more dubious manoeuvres above gear got me back to the last bolt. I thought to myself ‘This seems pretty serious – more than the 5 mentioned in the guidebook’. With some more dubious manoeuvres, including some ‘off-bolt’ swinging, I managed to reach a large flake to my left. After some strenuous moves and some worrying ‘Looking-down’ I attained the relative safety of a ledge. By this time, the other 3 had met at the belay stance, conferred, and come to the conclusion that I should have gone further right. I had come to the same conclusion myself. I found a large crack, jammed in a large hex, and got Ian to lower me. 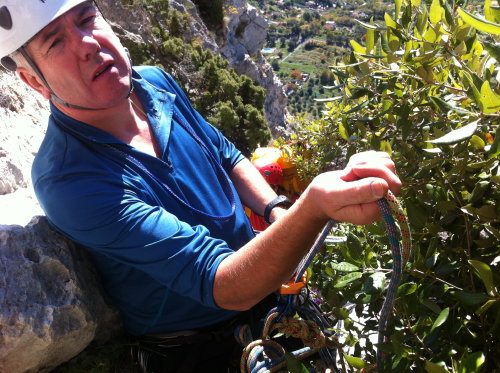 After a pleasant lunch, I tried again. This time I went further right, and found the polish and another line of occasional bolts. I knew I was back on route and ran pitch 6 and 7 into one. Ian polished off pitch 8 with style (in the local guidebook the crux pitch), and I led the easy pitch 9. Pitch 10 proved a bit of a struggle for Ian. The Rock Fax guidebook rated it the crux pitch. Ian studied the slightly polished crack, and inched slowly upwards, clipping bolts and placing nuts and slings as he went. Again, Kevin and Barry had caught up with us, and with shouted advice and encouragement from the 3 of us Ian reached the safety of the 10th belay stance. 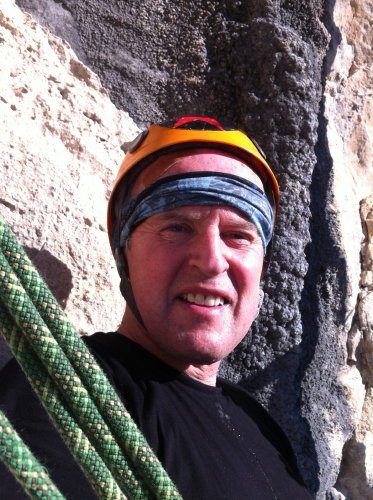 From there it was easier. I led the 11th pitch – an easy but airy traverse along an exposed ledge with a 200 metre drop below. The second last pitch was harder than the guidebook rated 3, but the last pitch was an easy scramble. Ian and myself finished just before 4 o’clock, Kevin and Barry finished about 20 minutes later. After mars bar, a very pleasant walk back to Saint-Jeannet and a well deserved beer, we caught the 5:30 bus back to Nice. Here’s a few more pictures: 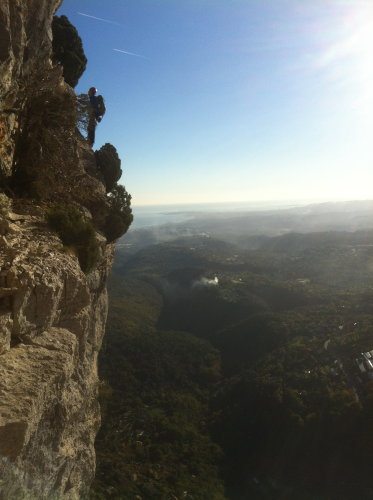 This is a view from belay point 10 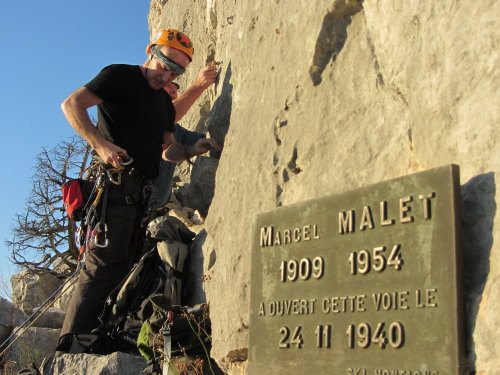 Finished in time for tea 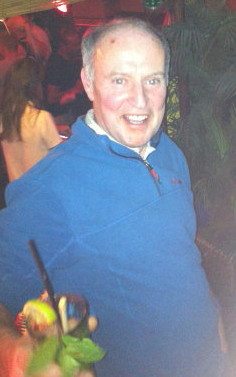