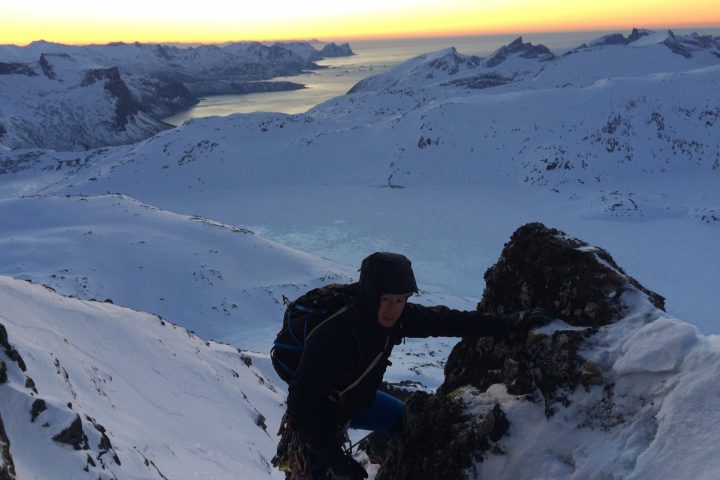 Senja, Norway is an extraordinary winter ice, and alpine, climbing destinatin within the Arctic Circle. Here is an account of a recent successful summit bid by a party of Irish climbers.

We pulled in below Store Hesten (984m) the evening before to look at the following day’s objective, Cave Couloir (AI3/WI3 650m). I admit with hindsight, that I thought it looked like it would go easily. Myself, Niall, Dave and Dermot agreed that an 8am departure from the car should leave us adequate time to complete the route and descend in reasonable time.

We were on Senja Island, Norway and had spent the last few days getting used to the conditions. Conditions were a mixed bag. On one hand it was very cold and settled but it hadn’t snowed in weeks.  This meant there was minimal avalanche hazard but the continuous low temperatures had made ice rock hard and very brittle. Unlike the popular area in the Alps or Scotland there was little or no trace of activity, so the climbing was on virgin ice; and no helpful hooks or steps to ease our ascent.

We stepped from the car the following morning. it was minus 12 degrees Celsius. I don’t think it ever got any warmer. The approach to the couloir was a stiff hour and a half’s walk; the last half hour on easy, steep ground. Luckily it was perfect neve. A slip would have involved a long slide, so I kept a firm grip on my axe.

While we’d been gearing up it became clear that we’d only one set of nuts between the two teams. The other was sitting, uselessly,  back in our lodgings.  Dave and Dermot agreed to let us use their belays. Not ideal but it saved the day for us. Niall and I briefly talked about binning the route but it came to nothing. The four of us belayed at the first step of what turned out to be one of the cruddiest pitches of the day.

In leaner conditions, it would be a good ice step but, this far into the season, it was banked out with huge amounts of soft snow. Dave set off leading. He eventually managed to pull through over the top of the step. This involved spreading himself wide and distributing his weight over the whole width of the gully. A slip here would have been nasty. He made it to better ground above and I let out sigh of relief. Dermot followed David. Niall hot on his heels got over the lip and I followed up what was left at the rear. Another step established us in the gully properly.

From the road it had been hard to get a measure of what lay ahead. Now that we were in you got a sense of scale. It was huge. I’ve climbed quite a few Scottish gullies but this was like one on steroids. After the initial ‘cave’ pitch, we ran out a couple of easy pitches. It was at the 3rd or 4th belay that the cold really started to get hold of me. The wind was hitting the mountain and blowing down the couloir carrying spindrift with it. It was the coldest I ever remember feeling.

At the fourth pitch, I arrived at the belay. Niall had tied off a sling to two buried Nomics. It was not ideal but there was no gear to be had especially if you have no gear!  There was a long wait here and we were pummelled from above by snow and ice as Dave continued up and looked to build a belay. When Dave was ready Dermot and Niall moved on too. Niall had to wait for Dave to lead off on the following pitch before he could clip into the belay and bring me up. Keeping warm and waiting was tough. Every so often one of the lads sent down a present to keep me on my toes. The views out behind us were opening up all the time. It really was impressive.

The next belay I clearly remember was built around a peg Dave had put in below a short icy step. It was very narrow here so everything was funneled down onto us. I was happy to get moving again. Leaving the peg behind I moved up over a step and then followed the rope out of the couloir over a steeper section up above to Niall. It steepened to 80 degrees for a few meters and I asked Niall up above to take the rope in tighter. His reply from above was ‘don’t f**** ng fall here’. I arrived at the belay he’d manufactured from two buried axes (again) and a short screw. We were out on the side of the mountain now. The exposure was breathtaking. The mountain dropped away below us down to a fjord. A huge frozen lake had come into view on a plateau out to our right. It was starting to glow faintly pink.

It was amazing. Niall moved off after the lads leaving me with instructions to keep him on but not to hang on the belay. I felt alone. The climbing in Senja is really serious. If something goes wrong you’re a long way from help. I pondered this and more as I fed the rope out.

A rope length later we could see the top of the couloir. At the next belay I could see Dermot top out on the ridge. He turned around arms in the air. It would take two pitches of easy but sketchy climbing after this to reach the summit. By now, the views around were unreal. The sun was low in the sky and all about us off to every horizon were mountains, sea and sky. Apart from the lights from one or two small villages we were completely alone.

Niall and I started off up to follow the other two to the summit. We packed away the rope and moved out onto an ice slope and kept heading up. The light was fading fast and as we moved I looked back down below. A slip here would be fatal. The ground dropped away in a uniform slope over an obvious precipice. We both moved back into the crest and took the rope back out. We did a couple more pitches before reaching the top. I found the last couple of moves onto the summit excruciatingly hard. But our timing was perfect. The sun had just dipped below the horizon.

Standing on top with 3 lads was one of those special moments you only get on the hill. This was really something. In every direction for miles all I could see was peak after peak. The still dark waters of the Norwegian Sea below broken only by the wake behind the little trawlers heading back to harbour. The half moon rising shone on the snow. The biting wind tore at us. The array of colours cast by the setting sun was otherworldly. It took my breath away. I reflected on the past few years, on the darkness I’ve felt and at this moment the pure joy I felt inside was hard to contain. I felt so alive. A perfect moment. But like all such moments fleeting.

The previous night we had confirmed the descent route and we were delighted to see that it looked very straight forward from the summit.

The lads were already on there way down and we were losing light fast. It was still a good step down the mountain back to the car. We descended down the other side of mountain to a plateau with the large frozen lake we had seen earlier, Lille Hestvatnet. From here we had to skirt the lake for a while to a col and then drop down the other side back to the car. I caught up with Dave on the way down. He had stopped and seemed to be adjusting his crampons. I didn’t pay a huge amount of attention to be honest. I was running on fumes at this stage.

My own leg was still in recovery mode. Trying to keep digging in I was in a world of my own. At the col Dermot and Niall were waiting. It was full dark now and the 3 lads stopped again. It took between 30 and 40 minutes to reach the road from here. Continuing down once again I found myself at the back making my way through a forest of avalanche trees (that bend when avalanches pass through). I could see by light of the others headtorches they had reached the road. Dermot waited for me as I stepped out of the trees. It was 7pm. We’d been on the go for 11 hours. Niall and I had shared a bar of chocolate during the day. Now, I was wiped.

Dermot told me Dave had stopped further up the mountain cause he’d torn his leg with his crampon. The two others had given him first aid on the hill so he could get down without causing any more harm to himself. He must have said it to me on the hill but I had missed it completely; so focused had I been on getting down.

To make amends I drove him to a medical centre that night to get a few stitches. He didn’t want to let a local guide who’d had a few, stitch him up. When Dave told the guide which route we had been on  he was informed “there is no protection on that”. We knew that now. So instead of a few expensive beers I spent the night in the car and A&E with Dave.

From the reports we were getting on Messenger from Niall and Dermot we had dodged a bullet. At 2am I crawled into bed. I was having a rest day tomorrow. The day alone made the trip worthwhile for me. We did get another great mountaineering day done and a couple of days of steeper ice. It had been a fantastic trip in a really beautiful location with good company. There are endless possibilities there. I will certainly go back