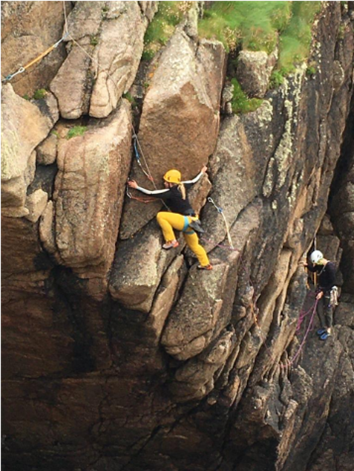 Cruit (say “Critch”) Island is a special place where it’s all about multitudinous small crags in a confined area, clean rock, good protection, high quality routes at all grades hard and soft, and easy access to top and bottom of buttresses.  Its an environment in which any group can generate a head of steam and get more climbs in per day than they may be used to, half a dozen for the energetic.  And the scenery – wild grass, golden beaches and blue seas!  Nothing like a swim before breakfast to start the day. Easy to become infected with positive mental attitudes.  No WIFI, SFA phone reception and half an hour by car to the nearest shop, in no time at all life develops a whole new cruising speed, and, there is rumour of a pint available at the golf club.  The weather had been great for a week, and we had landowner’s permission to wild-camp (in the Albatross area, the centre of the universe) in case of issues locally, though no problems arose. One happy camper felt that the free public camping spot, a 2 minutes commute away á velo, but right on the highwater mark, made her a better offer!

A cautionary tale.  Cruit is served by two guidebooks, the beautifully produced M.I. Donegal Guide and the Unique Ascent (aka Iain Miller) pdf Cruit Guide, which is infinitely more detailed.  An extreme example of the difference might be route 58 Milldog Groove, Severe.  In the Donegal Guide there is only a line on a picture, but the Cruit Guide has a line on a photo but like all its inclusions also contains text – Climb the right trending shallow groove, a metre to the right of “Exit Stage Right.” The first 5 metres is “protected” by a cluster of small wires and the chance of bouncing off the ground is high in the event of a fall.  Make up your own mind which guidebook you prefer, or use both?  Fortunately it was a senior senior who went at it and all is well.

The personnel were a mixed bunch of elder lemons with endless experience constrained only by weary bones, and an enthusiastic younger set rearing to go constrained only by inexperience.  Symbiosis well matched them all.  Most of the oldies got there for the “weekend” as early as Thursday and got scouting.  Two very local crags would do just fine for the first day anyway, the aptly named Outdoor Climbing Wall (which is tidally affected) and Far West Buttress which isn’t, each 5 minutes on foot away from a steering wheel.

None of the crags can handle more than two or three ropes simultaneously so the first full day when the whole gang was together we split up, with the more ambitious continuing their scouting for new worlds to conquer, while the main party attacked OCW with a vengeance.  Just about every single route was polished off before lunch at the agreed 2.30, and back to the campsite for everyone (its that handy a set up).  Straight Cut, Deep Cut and Jitterbug stood out.  OCW is a fine learning / teaching crag, so compact anyone can be talking to everyone else in the one go.  All that were ready willing and able to lead got leading.  Everyone concentrated on picture perfect runners and belays, under the watchful eyes of everyone else.  Everyone without exception learned new tricks.

The afternoon saw the invasion by the many of Far West Buttress, where routes Cruit Crack and Cave Rave Traverse received special attention, well deserved, each grade Severe.  The whole island experience, but the Crack in particular, was one huge nostalgia rush for this scribe, but I knew I had to lay off the anecdotes when I noticed two of the younger set simultaneously humming and pressing hands to ears.  The Crack begins with an unusual climbing manoeuvre called the Cruit Crack Flop, involving leaning out over a minor abyss until you topple over, the hands meeting the rock face opposite, whereupon with hope in your heart, a purposeful stride then completes things. Everyone in the end managed it except one climber weighing in at ever so slightly less than the advisable 6 feet, whose hair used to be red but otherwise may not be further identified out of respect for the high regard with which he is known to hold all things GDPR. He (sorry “they”) felt it would be at best undignified, or worse, did his outstretched hands not quite make it to the other side and he kept revolving at 32 feet per second squared.  He having spent his life as an engineer, was heard to mutter words such as “cantilever” and “equilibrium” before producing a pocket sized slide rule and calculating the odds.  The decision made, he then scurried round a circuitous bypass of the Flop so it all ended up inelegantly but perfectly well.  Others shall remain also nameless, not only to save my own blushes for racking up three points for a refusal and having to have more than the one go at it.  The Flop serves all the several routes in that immediate section of the crag, so it is definitely something to look forward to.  The Crack itself is a stunning 25m layback on steep ground, but with resting spots aplenty and more protection capabilities than most climbers possess.

Cave Rave is a 3m abseil in, which is probably avoidable (bite the bullet and scramble down), but which anyway adds to the expeditionary feeling.  A fine “pulpit” type ledge then allows a lengthy traverse which must differ greatly in character at different tide heights.  We were bang on high water so the challenge was to stay dry footed.  It is thin enough in spots and as always with these sideways things, everyone is a leader, the runners being more to keep the rope dry and above water.  With what is coming next no one messes with the belays, trebling up and more.  The last pitch keeps to the lip of the cave itself and “airy” is insufficient to describe the experience.  It is a bit like climbing up a tall building and detouring out to the tip of the projecting flagpole?  The belay on top introduced some to new terminology “belay well back”.  If you want to climb is such places, get used to it.

Some attacked New Dawn Wall where Greedy Pigs Route at VS stood out, and also specially commended were Exit the Horse, Wolfs Route and Racing the Waves.

On the Sunday there was a scattering.  Some were homesick and headed southeast, others went walkabout, even a kayak was seen but nobody is sure if it floated, while a core group of enthusiasts hit the walls.  Tom’s Dinner on Albetross Wall and on Far West Buttress – Uaigneas stood out, as well as Tridents which is the name of not one, not many, but six different crack lines, and there our heroes sported and played the morning hours away before the promised rain arrived exactly on schedule at twelve noon and at last it was time to homeward wend their weary way.

I just can’t wait to get back, next time maybe in May or June with the long days and the short nights?