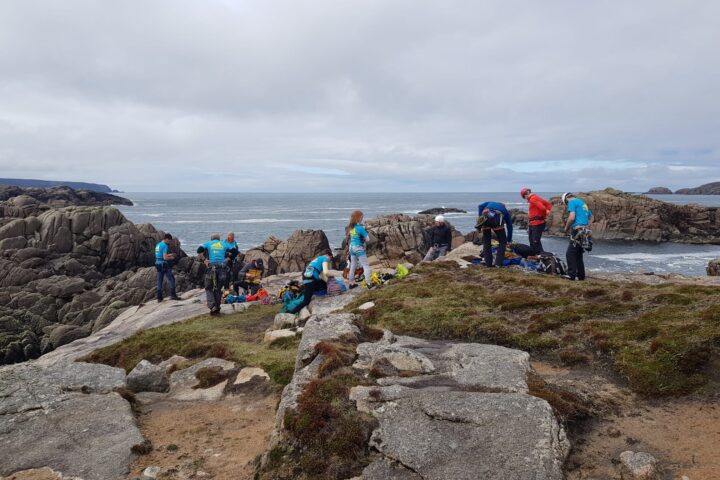 After a couple of years of covid cancellations, the Donegal Climbfest returned this year. The Colmcille Climbers put on a great event with plenty of outdoors activities both day and night. A mixed forecast meant numbers were probably lower than anticipated though included five IMC’ers. The event was held in Maghery just west of Dungloe, on a campsite at the back of the local community center. The whole operation was very friendly and the place makes a great base of operations for the area. There are some local crags at Crohy Head and just twenty minutes up the coast is Cruit Island.

On Friday, en route to the festival, Síle and I stopped off at Muckross Head for an afternoons climbing. We were joined by a plethora of fish and cetaceans who came by to watch us struggle on the underside of the crags many roofs and overhangs. We spent some time watching them too, possibly a little too much. Believe me, when I tell you, it does not fill you with confidence when you call “Watch me here!” to your belayer, only to receive a speculative response “I think it might be a basking shark”. You can trust me when I say, noticing said belayer seems more focused on focusing her binoculars than whatever predicament you have placed yourself in only adds to the apprehension. That said, it is somewhat distracting when from your higher vantage point you realise that it could very well be a basking shark!

We spent the night at Muckross and the following morning drove on up to join the Climbfest. Sue was already ensconced in the campsite when we arrived and keeping her kids entertained on what turned out to be a very wet Saturday. Keith joined that night on the promise of better weather for Sunday and Monday. Enrico and his family were just down the road in a holiday home.

On Sunday the weather brightened up and we all enjoyed a day cragging on the splendid granite crags of Cruit Island (FYI Dave Walsh is organising a meet here in September). We also collected the commemorative t-shirts which were included as part of the registration fee. Twenty euros for camping and a t-shirt, what a bargain!

The shirts were printed in Ukrainian blue and yellow. A fact that must have irked a certain Russian leader as that evening he threatened nuclear annihilation with Donegal being ground zero. Cool in the face of danger (or blissfully unaware) some folk took a stand against the imminent threat of radioactive tidal waves by forming a vigil of sorts telling stories and singing songs around a bonfire on the beach. Certainly, a brave stance against authoritarian aggression. Others, including myself, took the more cowardly though presumably far safer option of The Strand Bar. A position that was further defended, as the night went on, by a protective conga line forming a human shield around us.

After a long night of improbable protests, Monday got off to a slow start. However, since the county hadn’t been reduced to a nuclear wasteland, Keith and Enrico decided to return to Cruit and nab a few more routes before heading home. Meanwhile, Síle and I opted to drive to Sail rock and tick off the classic route Main Mast, which was an excellent way to round off the weekend.

A big thanks to Alan Tee’s and the rest of the Colmcille climbers for organising the event, it’s great to have meets like these back on the menu after the covid hiccup.

Jokes aside the ongoing war in Ukraine is spreading death, violence and displacement to many so please consider donating to the Redcross Ukraine Crisis Appeal at https://donate.redcross.ie or support in your own chosen way.