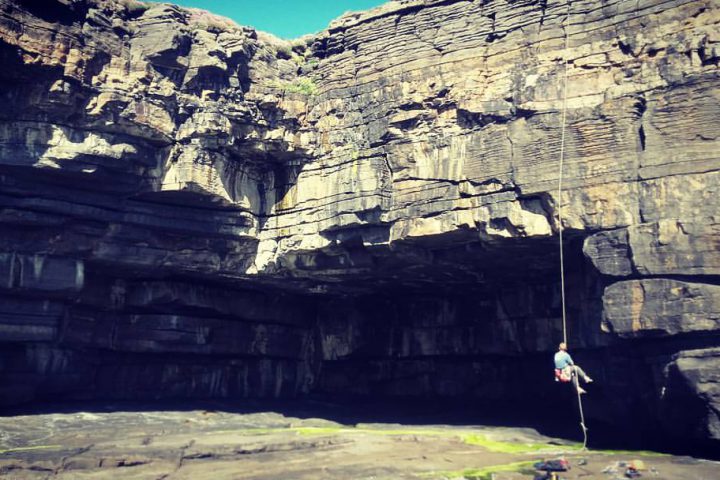 With the promise of blue skies for the weekend a last minute decision was made from myself and Jason to head to Donegal for vertical tomfoolery. The plans were loose and flexible; Muckross Head, Sail Rock or sea stacks. We headed for Killybegs and decided upon Muckross Head. 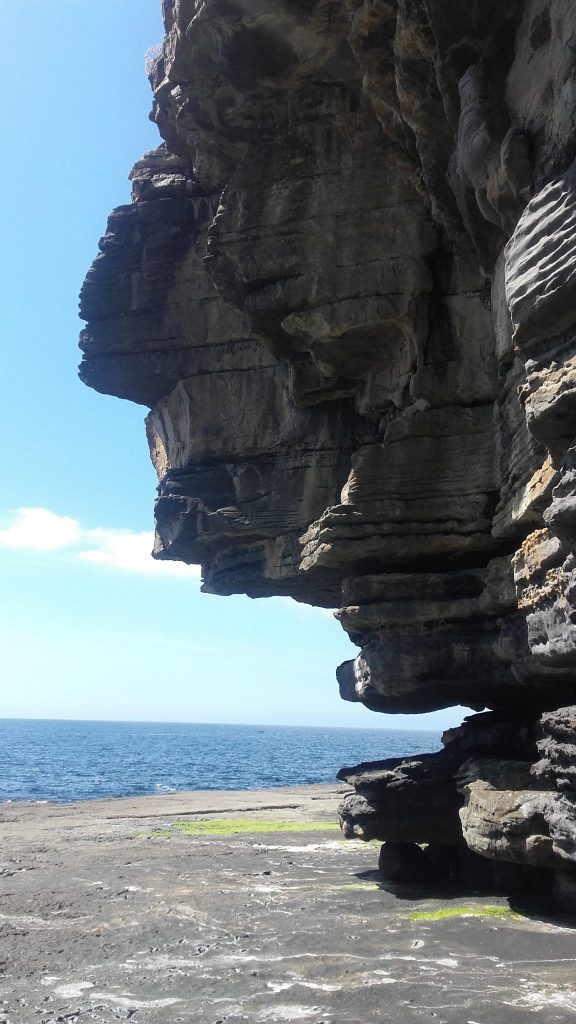 I’d been to Muckross Head years ago and was just starting out on my trad odyssey at the time. I recall thinking the climbing was hard and scary with most grades outside my remit. However this time with a different perspective the place blew me away. I couldn’t get over the fact that for most of the day we were the only people climbing! The crag is amazing, in a stunning setting, with top class lines… only in Ireland a crag like this is empty! 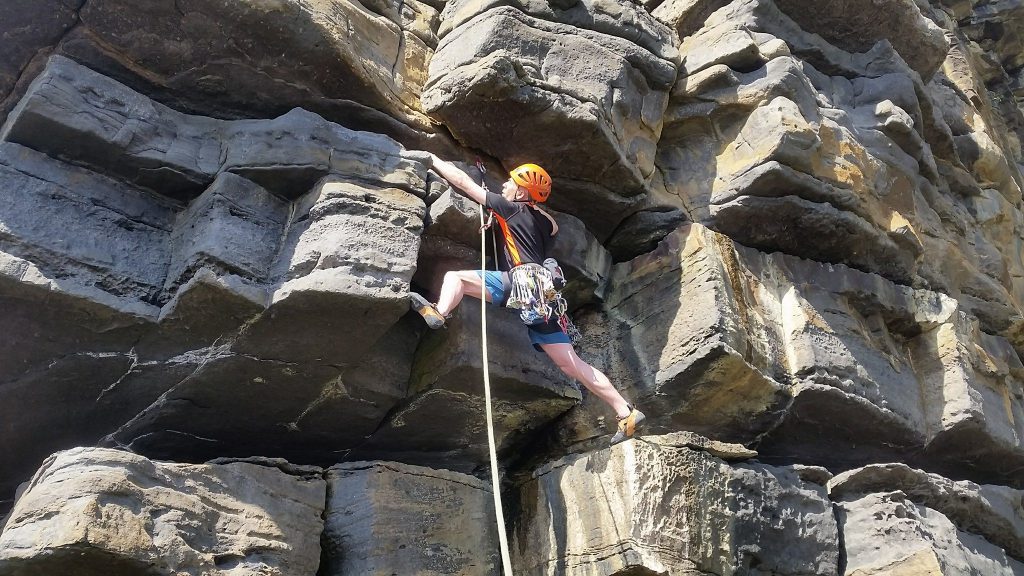 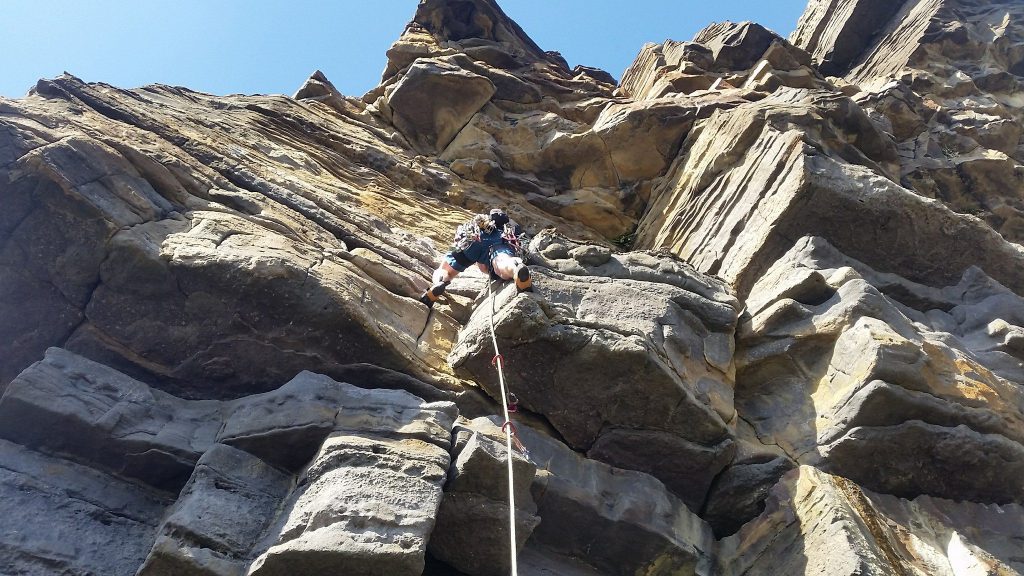 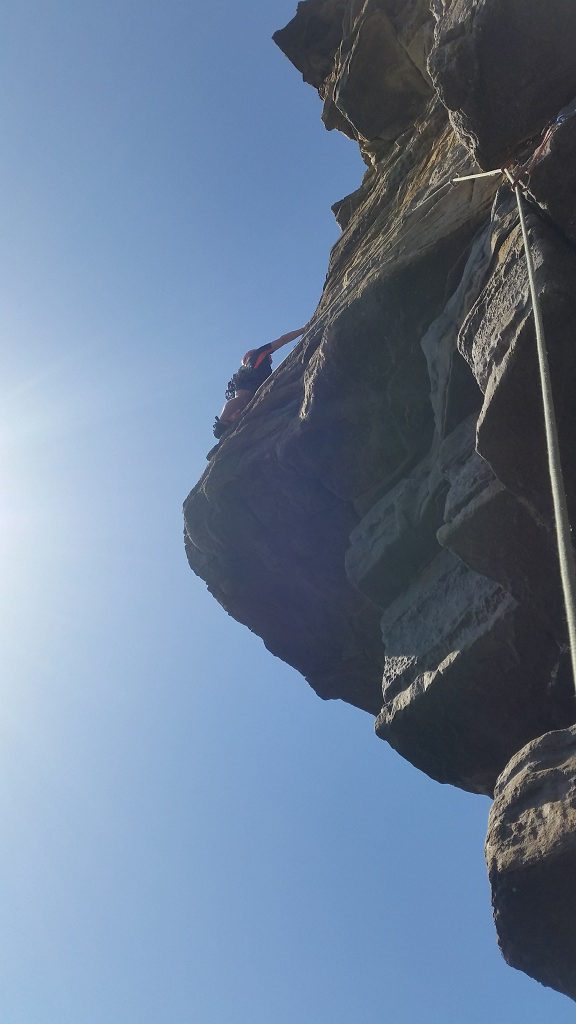 Regardless of what grades one is climbing, there is a savage days climbing to be had at Muckross Head. The climbing is amazing and very similar in parts to the limestone in El Chorro, but with more horizontal breaks.  The highlight of the day was two *** HVS routes – ‘Primula’ (a smashing *** route with acrobatic climbing) and ‘Joy of Fogs’ (a traverse from the gods!). I would suggest that Muckross Head is worth visiting alone for these two routes. I’d further suggest the IMC needs to have a meet here… which I’ll organize later in the year. 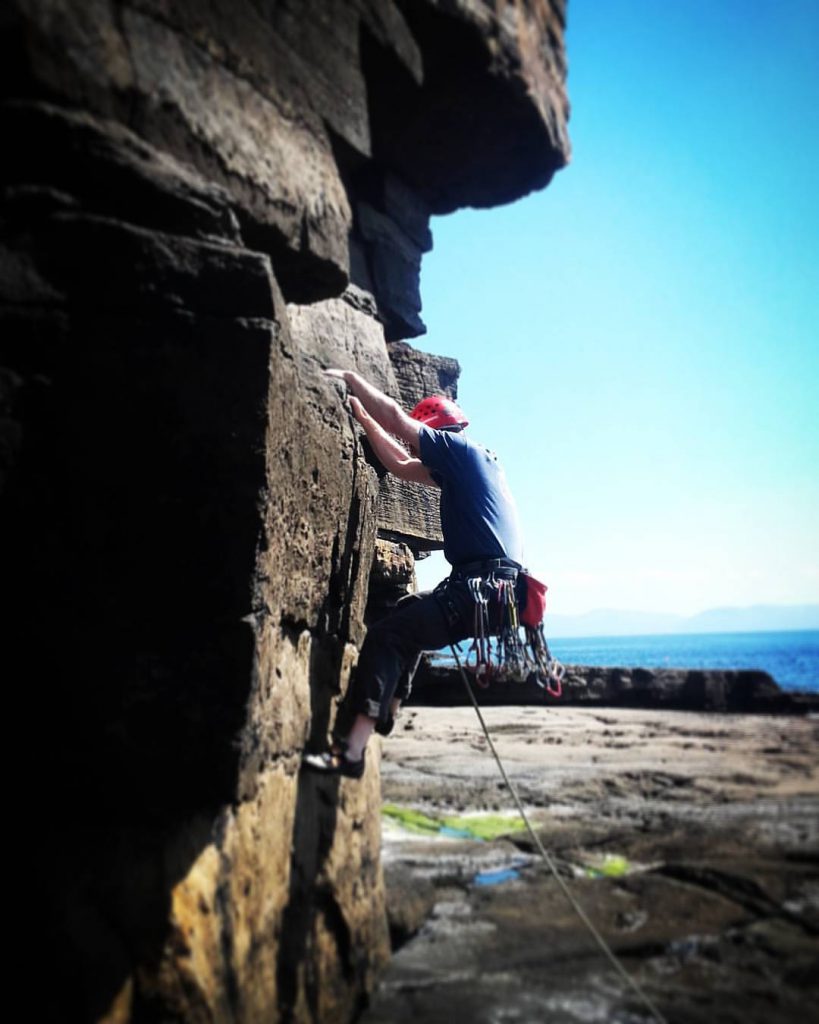 For those climbing at E2/4…. there are some *** lines worthy of attention. http://www.uniqueascent.ie/uploadedfiles/Muckross-Head.pdf 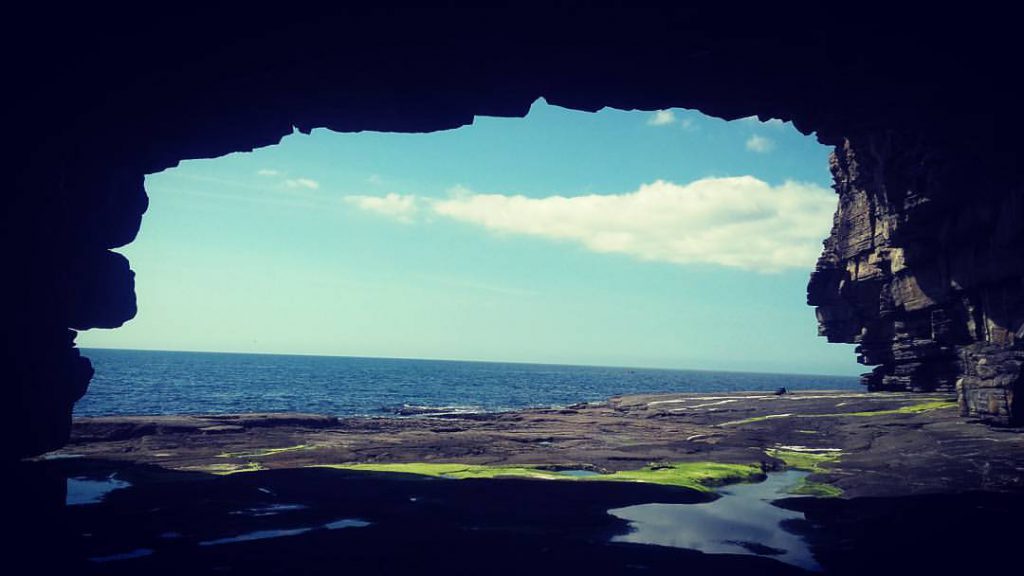 After our day of climbing we headed to Iain’s place to pick up a dinghy for Sunday’s action. He was kind enough to put us up for the night and ‘loan’ us a dinghy. I’ll expand upon the ‘loan’ part in a minute! 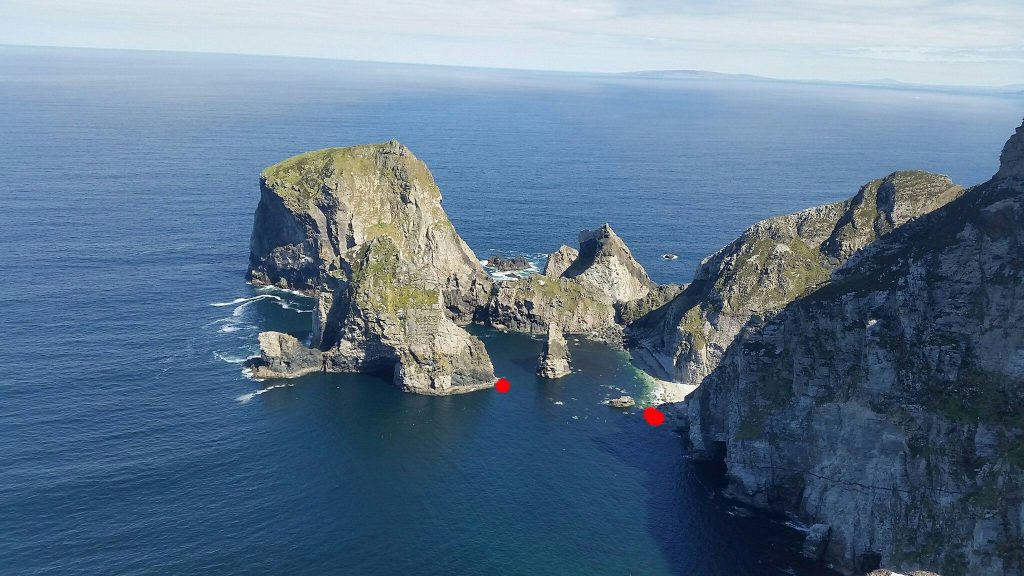 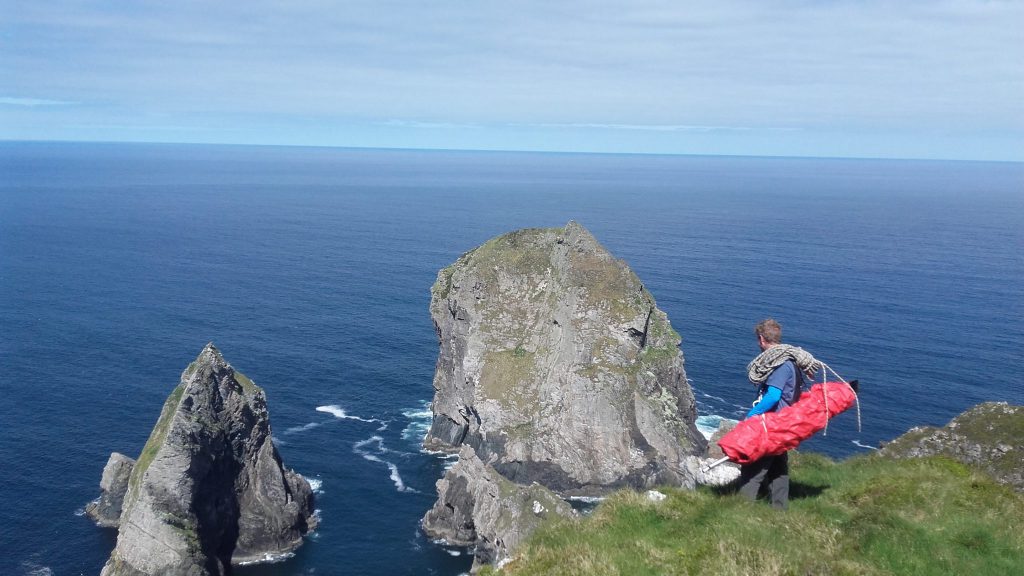 On Sunday we left a little late and headed to An Port (a must visit venue for any adventurous soul in Ireland), packed a small rack, abseil rope, climbing rope and dinghy. The walk in to our destination was about 50mins with sections of uphill while handrailing along a stunning coastline dotted by immense sea stacks. Our approach to the storm beach involved a tricky grassy descent followed by an abseil. On arrival at the beach one is faced with two towering monoliths, Cnoc na Mara and Torrmore Island. To go no further than visiting this beach is in itself a massive adventure. 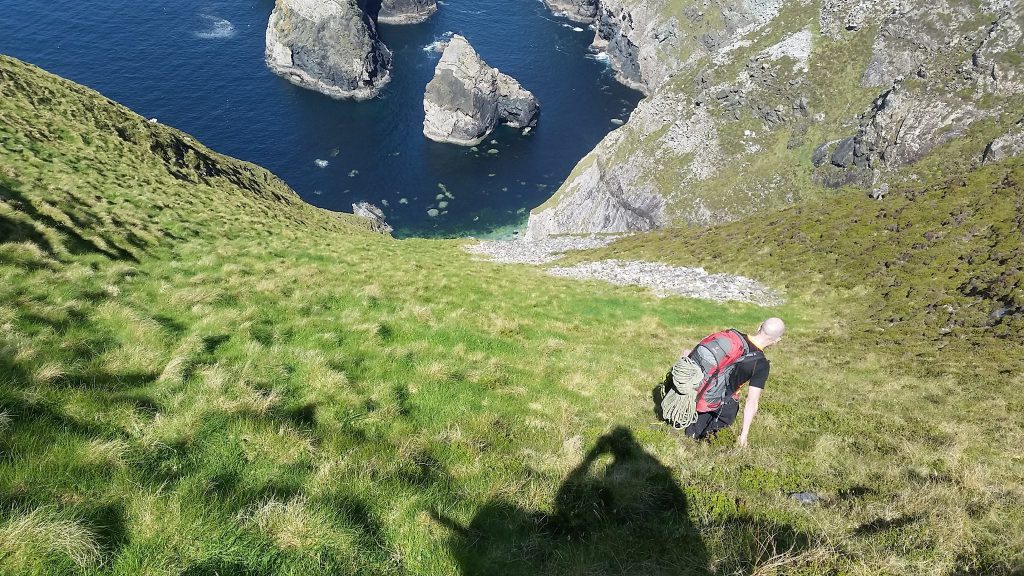 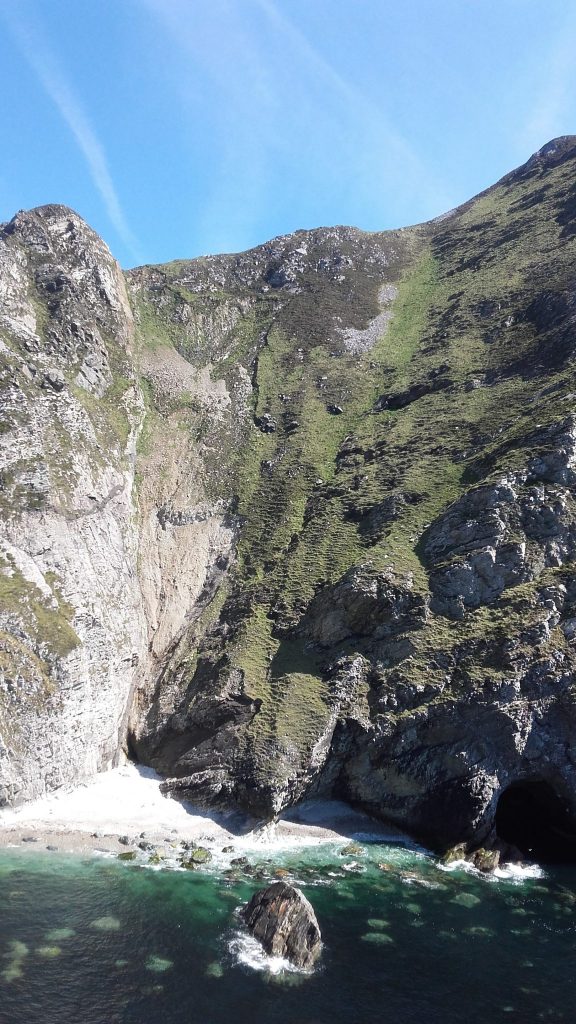 Jason got to work straight away by inflating the dinghy as I packed for the *** VS 4C arete climb on Cnoc na Mara. I personally feel that it’s difficult to place a conventional grade on such a climb as the approach and objective danger are significant.

I grabbed the dinghy and waded out before jumping in as the set of waves gently rolled us back and forth. Jason threw the gear in and jumped in. We paddled the 150m out to the base of the stack and had to pick a point to access the stack by bringing the dinghy in sideways and Jason jumping onto a small platform while the boat heaved up and down by the swell. We’d made it. 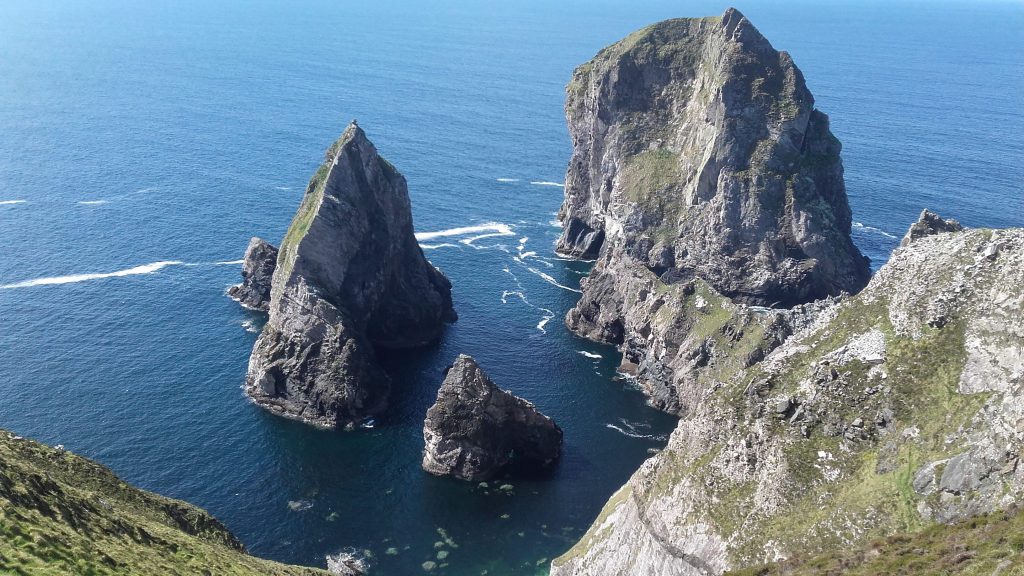 I placed a nut on the stack and tethered the dinghy to a sling. We kitted up and started off on a 35m solo on easy climbing but with significant objective danger as if you looked sideways at a block or handhold it would move!! A little more additional spice was added by two fulmers either side of us preparing to discharge a projectile of vomit. We were barely breathing as we tiptoed pass them and finally reached our first belay ledge. 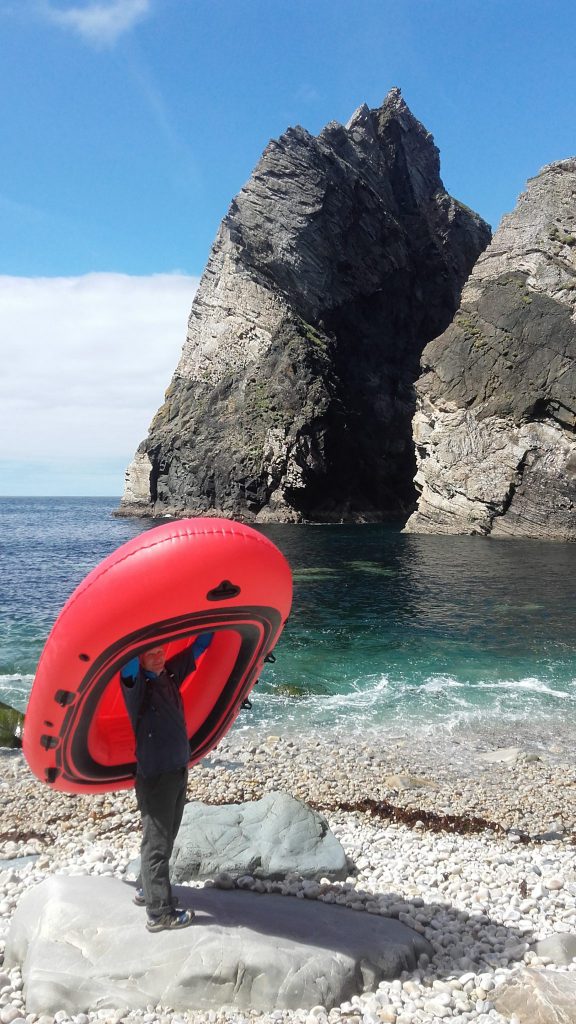 We kitted up for the next short 25m traverse pitch on easy ground, but once again with ‘observable’ objective danger. It was at this point that I realized that myself and Jason were in very different head space. Jason can’t swim, had hopped in a dinghy and then soloed sketchy terrain with significant objective danger between aggressive fulmers!! We had a chat and decided to go to the next belay and reassess.

I lead off across a slabby jenga traverse with one bit of gear for 25m and found the nice belay ledge with good gear. Jason followed up and we sat there for quite some time chatting. The situation at the second belay is immense and the scenery stunning. It was decision time! If we committed to the next pitch it was 35m of balancing up a knife ridge with 100m of air between each leg, followed by another 55m monster knife ridge to the summit. 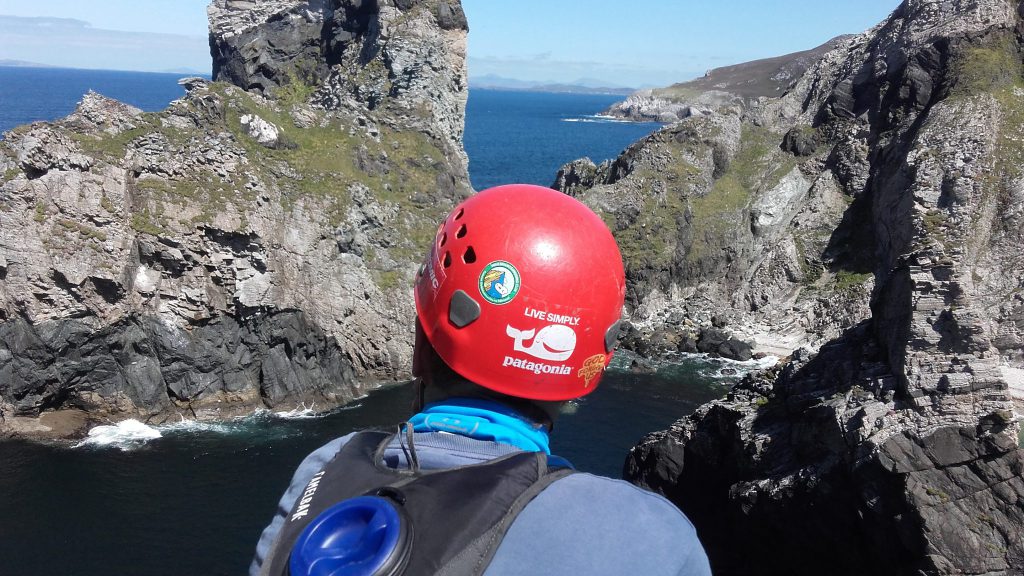 The way I now look at climbing is that if one is not enjoying the situation and climbing then the summit/goal just becomes a box to be ticked. If it’s not enjoyable then why bother, we decided to bail. Jason down climbed to the first belay and I followed. We then set up a retrievable abseil and I went first dancing between fulmers and loose blocks towards the dinghy. I was pleasantly surprised that the dinghy was still full of air and in good nick. I was sure we’d puncture it on the landing. 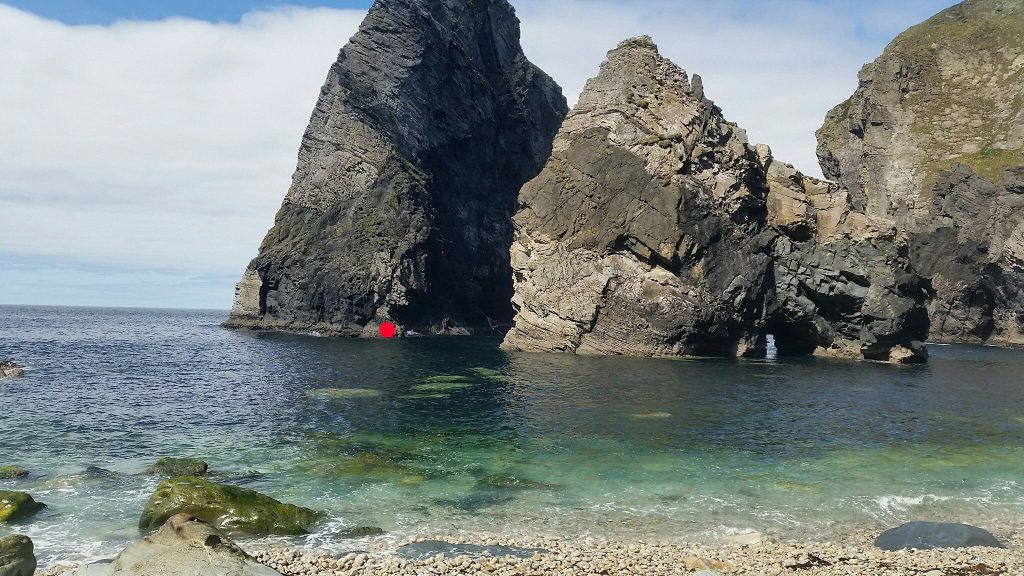 As I took off the kit, bagged it and changed into shorts for the ferry journey to land, Jason appeared above me and to the left of the dinghy. All of a sudden a massive block trundled down the last few meters and bounced off the dinghy! In the time it took Jason to to abseil the last 5 meters the dinghy had changed in form, from solid and reliable to a little soft and less inviting. I half joking and half serious asked him, ‘You’re only messing about not being able to swim, right?’ He informed me he certainly was not messing and there is no way he’d be able to swim back to shore. It was at this point that I revealed to him that the block he’d dislodged had punctured the dinghy…. Jesus… I laughed so hard!!!

It was a race against time.

I threw the dinghy into the sea and Jason quickly boarded. I was sure it would not hold his weight, but it did. I threw the rope and gear into it and hopped in fully expecting it to take water and sink… but it didn’t. We paddled furiously towards the shore and only slowed down when were were half way there as the waves were kindly bringing us in to land. On being gently guided onto the stone storm beach I jumped out and watched Jason drag the dinghy forlornly behind him… I laughed hard. 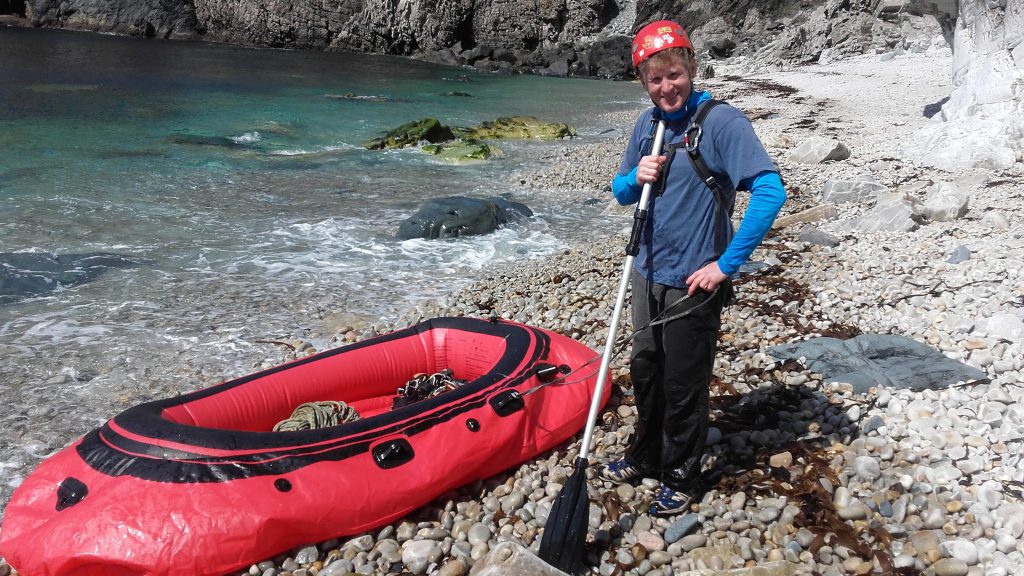 We packed up and started the horrible super steep journey out of the storm beach. Jason was ahead of me and I must admit to stopping at times because I was laughing at the situation that had unfolded; days like these are like gold dust. We finally made it to the van and met a local couple who had been camping nearby. We chatted for a while as Jason recounted our epic day and they kindly reciprocated by pulling out a small bottle of home made poitin, it was a nice finish to a superb day of full on adventure.

We had assumed at this point our adventures were over for the day, but boy o boy, how wrong we were. The road to An Port is single file in places and very remote. About 10 minutes from leaving An Port we pulled over slightly to let a car pass. The van started slowly sliding gently, as though it was on a moving carpet into the a massive hidden ditch. It was almost on it’s side!! We were completely and totally stuck beyond question. Jason hopped out and the guy we pull over for gave him a lift up the road as he searched for help. We needed a tractor or something bigger. 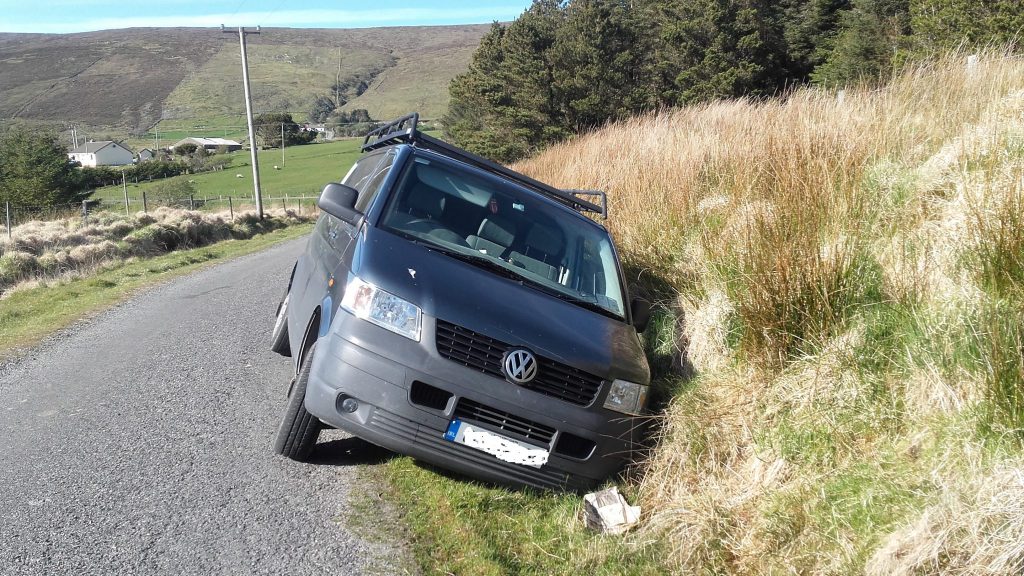 There was no flaring tempers or throwing the toys out of the pram. We just treated it as another problem to solve in a day that contained many and got on with it. About 30mins later Jason arrived with an elderly man on an old tractor and his son in a car. They tried several times to pull the van out but to no avail, it was well and truly stuck. They gave it one final go and the van started to move backwards…. it was coming out…. BANG!! I looked over my shoulder to see the farmer had driven his tractor into the deep ditch on the other side of the road. You couldn’t make this shit up!!

We spent the next 1.5hrs trying to get the tractor out involving shovels, stone slabs, planks..etc. At one point the elderly farmer who was as strong as an ox was flung 180 degrees while trying to grab the tractor wheel to push it!! It was turning into a dangerous situation with poor decision making due to frustration. Finally Jason and the two locals jumped in a car and went in search of a larger tractor. I stayed with the van and tractor which were now blocking the road completely.

A car approached and the passenger, bedecked in his Sunday best, without hesitation jumped into the tractor to help. We spent the next 30 mins placing blocks underneath it and almost succeeding before the others arrived back followed by a monolithic tractor. Over the next 10 minutes all vehicles were pulled from their respective ditches and the adventure was finally over.

Without doubt one of the best days I’ve ever had in Ireland and with great company.

Adventure is alive and well in Ireland, you only have to look for it.