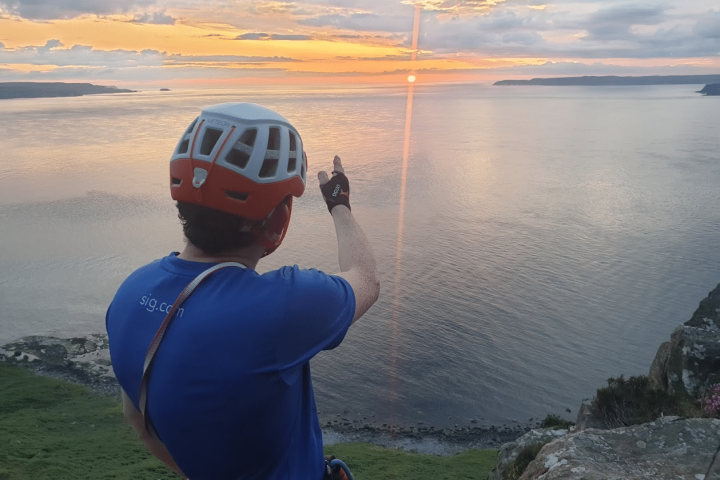 For those who don’t know what Fair Head is – Fair Head or Benmore (Irish: An Bhinn Mhór; The Great Cliff) is a five-kilometres-long mountain cliff, close to the sea, at the north-eastern corner of Co Antrim. That’s only the beginning of it. It’s considered to provide the best rock climbing in Ireland, with cliffs that rise up to 100 metres high in places. In terms of expanse and challenges, there are few comparisons in Ireland or Br

The place is glorious, it has everything one can ask for: long multipitch routes extending to 100m; fantastic single pitch lines; and world class bouldering for the hipsters.

I should mention here, that despite all its glory, the crag isn’t exactly beginner-friendly. The easier routes go at VS 4b, and that is a real VS. Every route is steep and long with serious commitments along the way. This is important in the context of this year’s meet’s attendance – more about it later.

In this article, I won’t be getting too much into the history or the layout of the place, but if you are a new member or simply never been, before continuing on, please do read up on our  fellow club member’s fantastic first time visitor’s guide to fair head: https://hikeandclimb.ie/fairhead-climbing/

As it’s been over the last few years the meet was organized by Jon Smyth, the club’s legend and as usual took place on June – Prime season for this sort of thing.

He booked the weather, booked the camping field,  as well as the teepee tent, barbecue and burgers! The first climbers started to show up in the early afternoon, hoping to catch a spell of no-rain weather (any weather is good enough to climb in Fair Head, but somehow the no-rain type is preferred). The forecast can vary widely from reality, so when it doesn’t rain you simply rack up and go!

As I mentioned earlier, there aren’t really any easy routes, which makes it even more impressive to see all the new members show up and showing how it’s done.

In total we had over 20 tents filled up with climbers of all skills and abilities – probably the most of all the IMC organized meets anywhere.

By the time I arrived (around 7pm) people were already climbing, which was great to see. We quickly made it to the prow and abbed off on dedicated rope that Jon had already setup. He himself was half way up on Railroad,  a classic, 36m E1 5b jam-fest which has a three-star rating.

Nearby Petra and Rafał were already half way up Black Thief (VS 4b), while Brendan and I decided to warm up on the Fence (VS 4c). In the meantime Monika (a 2018 member) was wracked with indecision between joining us, the VS crew, or following Jon on what would be her first jamming experience, and hardest climb to date. She ran back and forth between the two parties,  finally going at the E1! Fair play!

By the time we topped out there was already a full-on party happening at the top of the prow!

As you can imagine, and it was expected, the party quickly moved on to the field, and it lasted till very late. People were still beginning to mingle, some just arriving late, others finishing the climbs well after dark (Rafał and Petra decided to go all-in and were back after 10pm!).

Saturday was always going to be action packed. The forecast was fantastic, giving all a full day climbing, and Jon, the indefatigable organiser, has a special Guest Star Speaker line up: Michelle O’ Loughlin (https://www.instagram.com/m0loughlin/). More about it later.

Because of the previous night, erm, celebrations nobody was keen for an alpine start. Some also say that “Fair Head is not a morning crag”, but I think it’s just an excuse to avoid getting up early (rather than because it is north facing!).

Either way, by 9.30am people were already paired up and making their way out. It was fantastic to see everyone getting ready and moving out despite the looming hangovers.

Since the place is so big, I can only write here about my own experience, and what I’ve seen.

This time round I paired up with Sarah, who was just recovering from her knee surgery and was cleared by her physio for some ‘easy climbing’. As I mentioned before Fair Head really stretches the definition of ‘easy climbing’! We also adopted Ilona – another new member from 2018 and Fair Head first timer!

After arriving almost  last at the descent gully we discovered quickly that the last route that didn’t have a queue was Taoiseach * 53m VS (4c, 4c), a route that I actually didn’t do yet. Sarah didn’t wait long and jumped onto P1, I led the 2nd, while Ilona cruised as 2nd on both.

After that we decided to check out another nearby VS – Odyssey, a three-pitch route that I’ve done in the past, but thought it’d be a good soft spot for ‘Crippled’ Sarah.

What we found was Weronika and Gareth who were already on the route we were interested in (kind of, they got slightly off the line) and another party of three. These were a Swiss man with his kids, who was wondering ‘where all these people came from’. He spent the previous week here with no living soul around, just to see over 30 people at once now!).

We decided then to check out on Andy and Brendan, who said earlier on they’ll give Roaring Meg (VS, 5a) a go. The route is located in the far end of the crag, so we figured there will be no queues there and a good chance we can go after them.

Meanwhile, the other side of the crag, The Prow – seemed also under siege by the IMC members.

As we were going towards Rathlin Wall where Roaring Meg ** 100m VS (5a, 4b, 4a) is located I noticed a man high up on the wall rope soloing. Knowing that the Belfast Climbing Club lads were planning to be around that day as well, I figured it can be only one person – Kyle. And I was right. This man has some impressive ticks under his belt this season (including Hell’s Kitchen Arrete, E6 6A) , and it seems he’s been preparing for another one:

When we finally arrived it turned out that Brendan and Andy were just starting P2. Good news for us, we can rack up and go up!
Unfortunately Sarah’s dodgy knee wouldn’t let her do the first, harder pitch, which was a bummer, as I definitely wasn’t looking forward to it! We both looked at Ilona who just burst out laughning and said she’s good, but not 5a good! (or something along those lines).

Either way I racked up and went onto what would be a classic Fair Head experience – Pain, Sweat and Tears. The first pitch of Roaring Meg has it all. Foot jams, hand jams, laybacks, and off-widhth magic. All of it. Somehow I made it to the belay without falling off. And brought the 2 girls up.

The remaining two pitches (both led by Sarah) were technically easier, but somewhat still intimidating – the tricky crux of P2, and very exposed step over the void on P3 made this route very memorable. I definitely recommend!

We were lucky enough to not get wet, as the weather was clearly changing. Technically I topped out in the rain, but it was just in time to change the shoes and move on towards the camp!

Other people started to make their way in as well, Including Michelle F.  and Nathan, who went exploring other parts of the crag, that are totally unknown to me:

Those who made it on time got rewarded with Jon’s Legendary burgers – definitely worth the wait! Some weren’t so lucky and had to settle for pub food in the nearby establishment.

As I mentioned earlier, the evening was also a stand out of a different kind as Michelle O’ Loughlin’s gave a fascinating talk about her life, her climbing adventures and other matters of life. It was a very interesting presentation. Check her out on social media where you can see her stories in pictures.https://www.instagram.com/m0loughlin


Unfortunately the afternoon  rain wasn’t going to stop, and we all knew that there would be no climbing on Sunday. That meant only one thing: barn party time till we drop. I myself am not exactly a party type, so I dropped early, but some of the lads stayed up till the bottles ran dry. Fair play.

Thanks again to Jon for organizing, Michelle for the talk, and to every one who showed up, or contributed in any way.

In this article I have only mentioned a handful of names (of people who were nearby when I was taking photos) , but there were so many more people around (old and new!) that it was hard to mention you all, a truly memorable weekend for all.