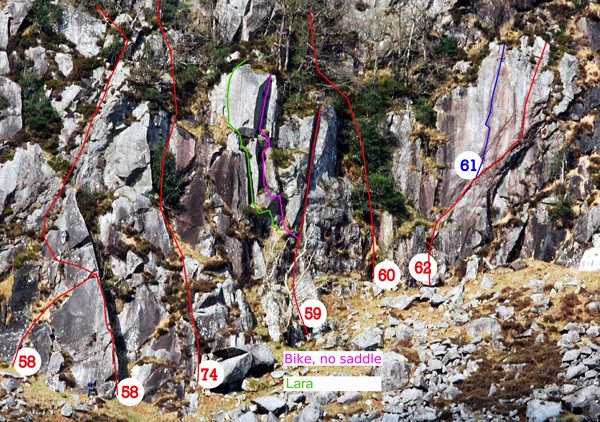 Kevin Coakley and myself have put up two new routes in Glendalough. I’d be interested to hear what someone thinks of the grading, after you have climbed them of course.
Don’t let the sight of plant life put you off. There is a relatively clear route up on both climbs and even after wet weather we were able to find dry rock on the lower pitch on Sunday. The upper pitches on both routes are dry.
We didn’t finish up the slab on the best line of ‘Lara’ on Sunday as it began to rain.

Two corners, divided by a sloping shelf above a short vertical wall.

1. Start as for Boru and scramble up an easy-angled rib to a pulpit-type ledge. Move left up a small rib of rock to a large ledge at the base of a vertical wall. This is “Shite Ledge”. Climb the quartz corner on the right, traverse left to pull onto a sloping triangular ledge. (Variation: move left along the wall, gain a lower ledge, step up to the higher ledge) Belay here.

2. Climb the corner on the left over a small triangular flat slab. Move right , pull up and over to another sloping ledge at the base of the last corner. (Variation: Move left and gain the ledge directly) This is ‘Feckin Ants’ ledge. Step onto the arête, using two small toe ledges to gain height. Move your feet back to the left face of the arête onto a upward trending narrow crack . Delicately edge up this to reach a good hold on the left wall above a small triangular alcove. Bridge in the corner to the top. Swing right around the aréte onto a narrow ledge. Belay from an oak tree.

1. Start as for BIKE, NO SADDLE. Traverse left along the wall above “Shite Ledge”. Step up onto a small ledge directly below an open book corner. Belay here.

2. Bridge up the corner, stepping onto a narrow edge at head height on the left hand wall. Bridge higher to reach a narrow horizontal finger ledge on the right hand wall. Pull up, bridge and step onto the finger ledge. Step up on small bumps to reach a large crack at the back of the ledge above. Large cam useful here. Step onto the ledge. Belay here.

3. Climb delicately up the slab above using small cracks. Belay from a large boulder on Forest Ledge. 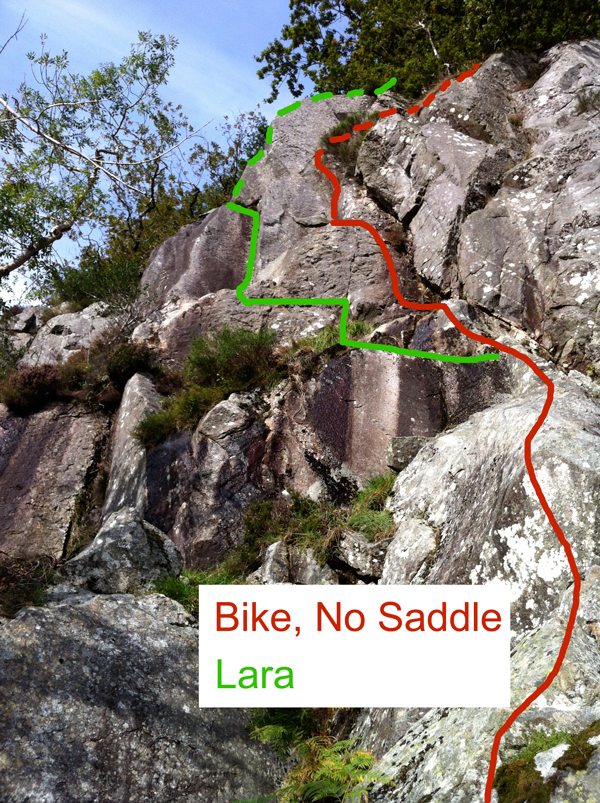 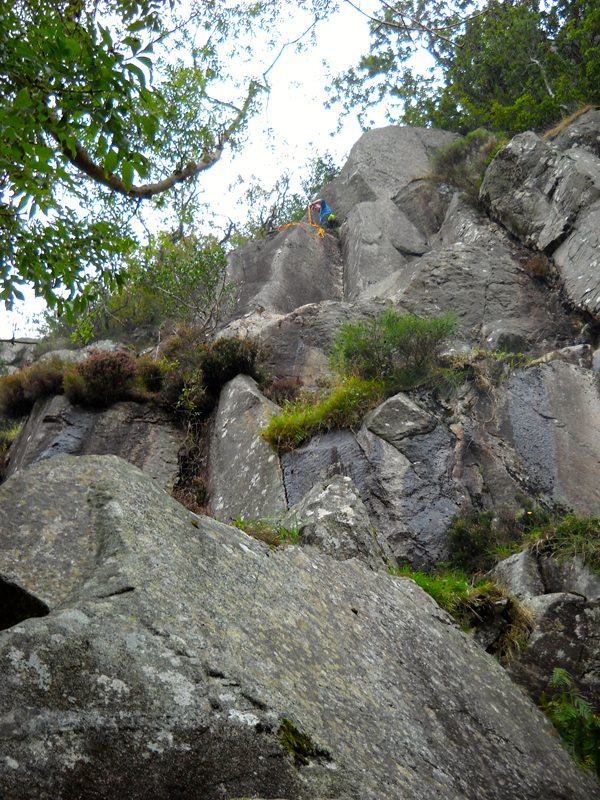 Top of P2 after the Crux on Lara (Photo: Niamh McGreen) 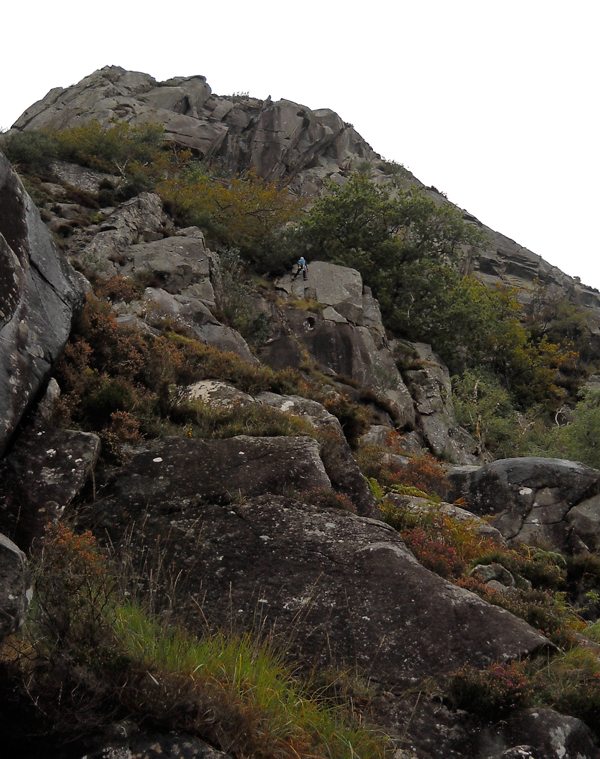 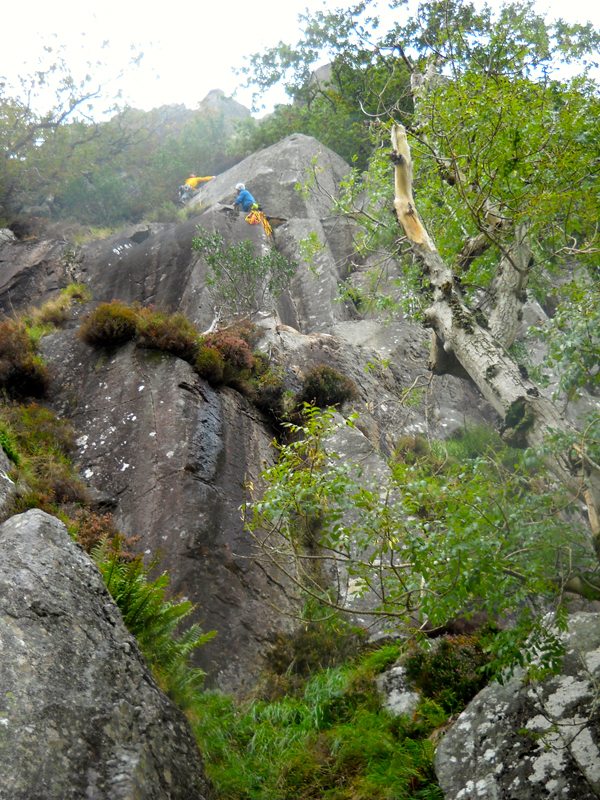 P3 after the Crux on Lara, beginning to rain, we were looking for cover here…at least I was (Photo: Niamh McGreen) 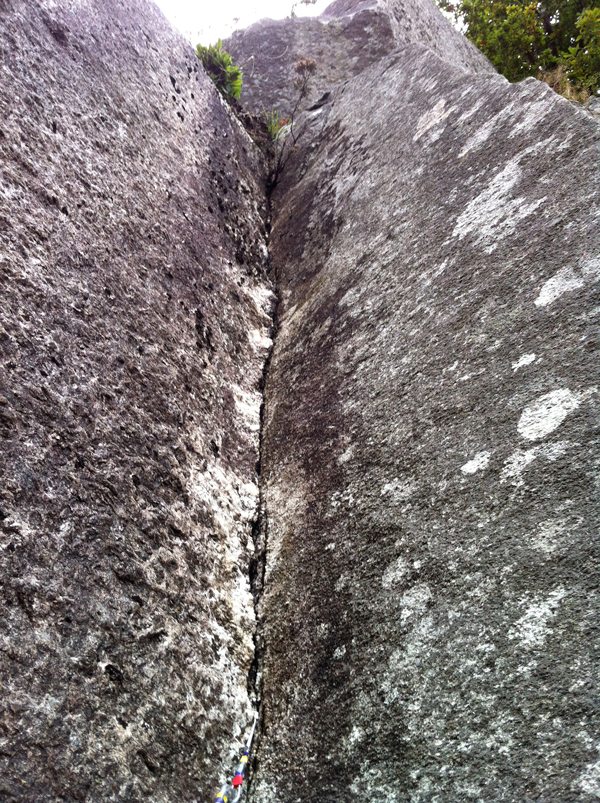 P2 on Lara, the crux, have a No 4 Cam ready for reaching over the top (If you have long bionic arms)