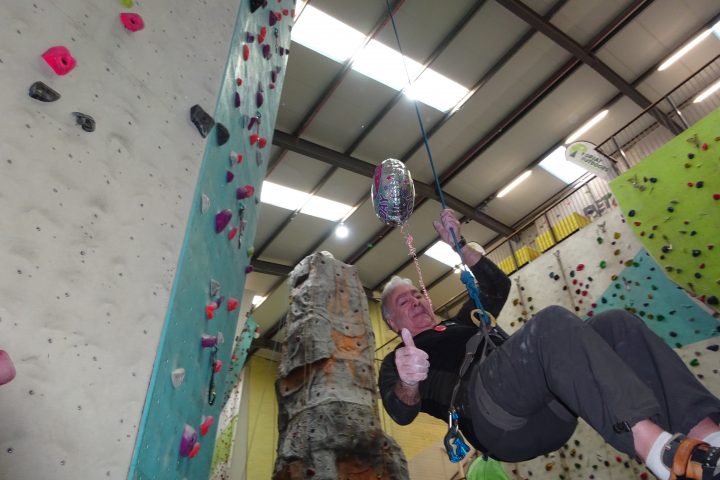 A member of the old Spillikin club and of late, the Irish Mountaineering Club, Terry Murphy sadly passed away in June 2020 of pancreatic cancer. As a young climber, back in the day, Terry climbed hard in Ireland and the Alps, pushing his grade on rock to H.V.S and Extreme. With the limited amount of gear on the market then, climbing at that level was an achievement in itself.

In the mid-sixties, Terry started hill-walking with An Óiga. Preferring those out of the way places, he frequented Aghavannagh, Ballinclea and Glenmalure Hostels. As with others of his day, Terry moved on to climbing in Dalkey Quarry.

Unknown to today’s climbing community, Terry was a notable graphic designer. Studying graphic design in Clogher Road Technical College, Crumlin, he has left behind an extensive portfolio of work. Sufficient to say, in his early years, Terry used those talents to help others. Ever the perfectionist, in his later years, he turned his skills to designing machinery, buildings and websites.

His other passion was aviation. Gaining a pilot’s licence, he loved to fly. On days out on the crags or the hills, he would reminisce on how the land looked from above. He used those skills in reading the weather, pointing out the cloud formation and air currents. The technical jargon of the aviator totally lost on his climbing partner.

Terry returned to rock climbing in 2016. The first lead of his reappearance was Paradise Lost. Done early into his return to the rock, Terry’s determination shone brightly. The crux didn’t present a problem – his stiff body did. It took him almost an hour to complete the route, displaying an extraordinary resolve to get up it. In 2018 he went on to put up a hard severe variation to the adjacent Fragile, following a thin crack, on the left side of the slab, to the top. Later that year we celebrated his seventieth birthday!

An exceptional climber for his age, he pushed himself and his body to the limit. With a seventy-year-old body and a 21-year-old mind, that approach didn’t always work! On occasion, he took to the air, commenting after the fall, “it’s the buzz that keeps me going.”

After his reappearance on the climbing scene – from the outset – Terry displayed his past climbing talent, pushing his climbing to Grade 5 (sports) outside in Spain in October 2019, and to 6B in Awesome Walls. In Dalkey Quarry, he led V.S. with Streetfighter amongst others of similar grade falling under his belt. More at home on light, delicate footwork, Terry earned the nickname “twinkle toes.” Past injuries hampered his ability to make a high step. He compensated with difficulty, using the lightest of creases to climb up to the next hold. Loving the hills, he was always up for a walk – again – pushing his body beyond what he was capable of. He cycled everywhere, and in the early days of his return to the rock, would cycle to Dalkey from Tallaght. At sixty-eight, that was a journey he soon abandoned for the bus or a lift! He did have some sense.

Terry was a natural coach. He trawled the internet for cool new moves and spent time trying to pass them on to our elderly group. A climbing session never went by without Terry making some coaching comment to someone. He is responsible for pushing the grades of others, often refusing to allow a retreat, encouraging the climber on. His desire for perfection made him the go-to person for climbing gear. He always knew what was new, the price of a discount rope, where the best deal was, and what would work best.

Up to his demise, Terry’s generosity shone through, regularly gifting bits of his own climbing gear to others. In the past year, his un-diagnosed condition played havoc with his body. He never let that get to him, pushing on with a training regime, refusing to let his grades slide. In October 2019, in El Choro, his failing health hampered him. But he trashed his body on, enjoying some outstanding days at the crags and in the pub! The life and soul of the party, always with some comment to make, Terry never gave up.

On 15th June 2020, Terry passed away peacefully in Our Lady’s Hospice, Harold’s Cross. His cremation followed a private service in St Agnes’s Church Crumlin Village, up the road from where he grew up.