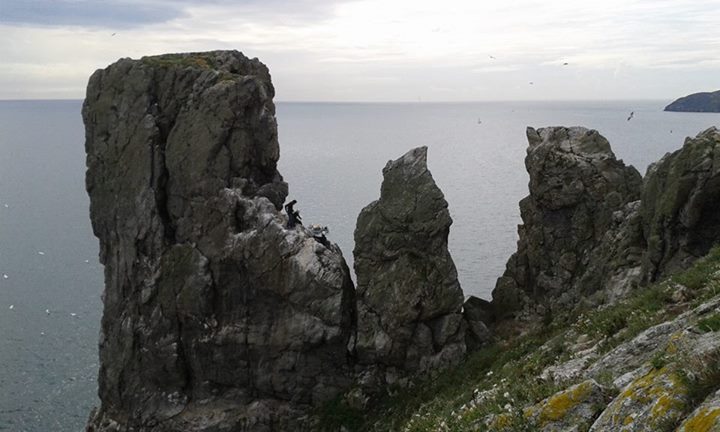 Last Saturday I joined a crew of ten brave souls as we headed out on the high seas from Dun Laoghaire on an expedition to climb the South-East ridge of Ireland’s Eye. For transport to the island we had commandeered a fleet of Laser-Vago dinghies and a small 7-metre yacht to carry our supplies.

Our first challenge was like a game of frogger, crossing the Dublin Port shipping channel while trying to not get squashed by any ferries or other vessels. Fortunately there was enough wind for us to sail clear of any potential dangers. Having successfully negotiated the shipping lane we continued on past the Bailey lighthouse and were soon off Howth Head.

Progress now slowed as the winds dropped but eventually Ireland’s Eye came into view.
The south end of the island is guarded by a rocky shore but the beach on the North-West side facing Howth provided a handy landing spot and we pulled out boats up above the high water mark. Once our porters had unloaded our gear we anchored our supply vessel for the night, and set up our basecamp above the beach.
After a gourmet meal provided by our base camp chef, sleeping proved another challenge. One essential piece of kit we should have brought were earplugs. We discovered that most aircraft seem to use the island as a landmark to line up their approach to Dublin Airport…that, and the incessant bird crys made for a rather noisy night, but it was still hard to imagine that we were less than nine miles from Dublin city centre.

The next morning our climbing team was organised, an international affair with members from Ireland, Hungary and Romania. With our gear sorted we scrambled into the base of the ridge. There was no need for chalk here as the birds had provided all you could want. There were some raucous spectators on the outer stack, and even a few cormorants on route who briefly objected to our presence before decamping from the rock. While the climbing on the ridge is very straightforward, the situations and atmosphere of the route are spectacular.

It was a first taste of Irish rock, indeed a first taste of outdoor rock for most of our climbing team (they said it had a distinct seabird flavour), but they soon dispatched the route in fine style. A short downclimb of the North Chimney had us soon back on solid ground, and feasting on the abundant wild blackberries now in season.

After breaking camp and re-loading our supplies, we completed a circumnavigation the island before heading back to Dun Laoghaire. Sunday’s wind was considerably fresher than the day before which gave a more exciting trip home.
Next year’s plan is to sail to Loch Scavaig and see if there is anything of interest there, but as Roy Scheider once said “We’re gonna need a bigger boat.”
The annual “Joe Reville Meet” to Irelands Eye is on this year on Saturday September 6. Don’t miss out.