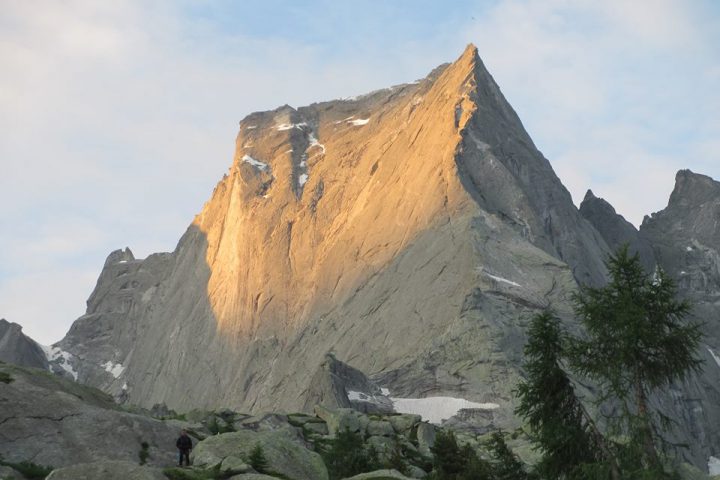 Wanderings and excursions in the country south of St. Moritz and the Italian borderlands of southern Switzerland.

German efficiency being legendary, that’s where Dave recently went on a trip to study their house building methods. Being so close to the Alps was not a climbing opportunity to be missed, so with his training complete, I flew out to join him, and we decided to head to the Bregaglia in the south-east of Switzerland.
On arrival the forecast was not great so we continued on into Italy where we caught up with Peter, Kevin, Barry and Vincent in Chiavenna relaxing after a week’s climbing. It was clear that these boys had gone soft, slumming it in the Hotel Conradi and overindulging on pizza and vino rosso. Their climbing ropes had been long packed away, so we relieved them of a few guide books and continued on to the Val di Massina in search of better weather. We were out of luck on that score, but after two days the deluge ceased and we finally got on some rock, spending a balmy day on Europe’s biggest boulder, Sasso di Remenno. 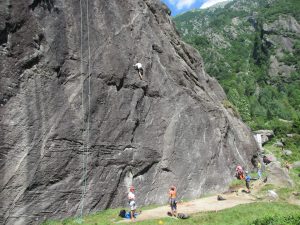 Dave’s appetite for alpine rock was truly whetted now so the next morning we broke camp and headed back to Vicosoprano in Switzerland. A short gondola ride had us at the Albigna Dam and we headed up the Spazzacaldeira for a warm up on the NE Ridge followed by the obligatory photoshoot on the Fiamma. 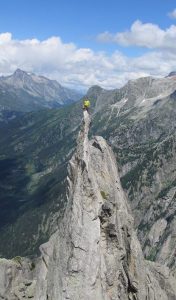 The forecast for the next day was just too good so we decided to go for broke and headed for Val Bondesca to try the Nordkante of the Piz Badile. Grabbing some supplies in the valley we took the toll road to Laret and after a brief stop to cook some gourmet roadside pasta, we started the long hike up to the Sasc Fura hut. 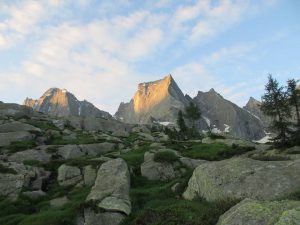 We managed to resist the heady attractions of the hut itself and continued on up to the base of the ridge where we bivvied as darkness fell on a starry night. Next morning after a quick breakfast, we stashed our kit and joined the procession of headtorches slowly making their way to the ridge. The light of dawn soon revealed the size of the task at hand, 19 pitches and c. 1000m of climbing, not to mention getting back down. 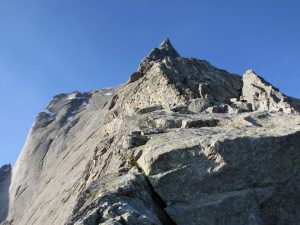 It was probably 15 pitches more than either of us had done on a route before which might explain why we always seems to be “maybe 4 pitches from the top”. The climbing was on pristine granite, and while never difficult, it seemed to go on forever. 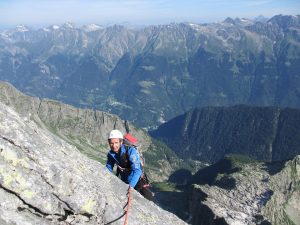 The other parties on the route soon spread out, and after passing a few slow teams at the bottom while moving together, we then had the route to ourselves apart from one old timer who passed through on a solo mission, and later a couple of parties we met near the top who were downclimbing having already finished the route. 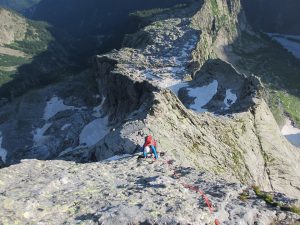 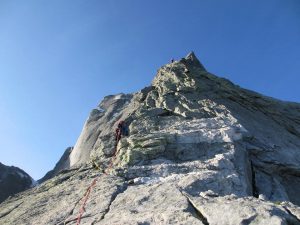 On and on and on we climbed…until finally we topped out at around 2pm having been on the route since 7am. Although the Gianetti hut on the Italian side now looked almost in touching distance, to avoid the snow-plod from Italy back to Switzerland, we had already decided to ab back down the ridge. 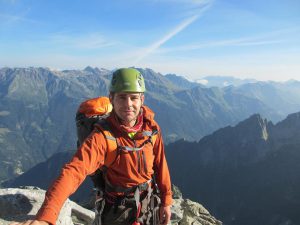 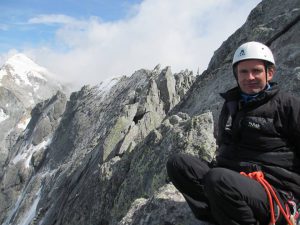 Seven hours of daylight seemed adequate to descend but it just seemed to evaporate. Each rope pull felt like we were rolling dice but luckily we only had to reclimb  one pitch to retrieve a stuck rope. The last few abs left us fumbling in darkness searching to find the next anchor, but after a few wrong turns we finally made it to the foot of the climb.
After crossing the snowfields we were now on easy ground but with little hope of finding our gear, so we settled for another night bivying in the meadows…maybe the ab into Italy would have been a more sensible option after all. Next morning we collected our gear and trecked down to the valley, reaching our car forty hours after having left it.
After two nights under the stars there was nothing left but to follow in the footsteps of those brave IMC pioneers who had gone before us, so we beat a hasty retreat to the Hotel Conradi…I think we’d earned it.