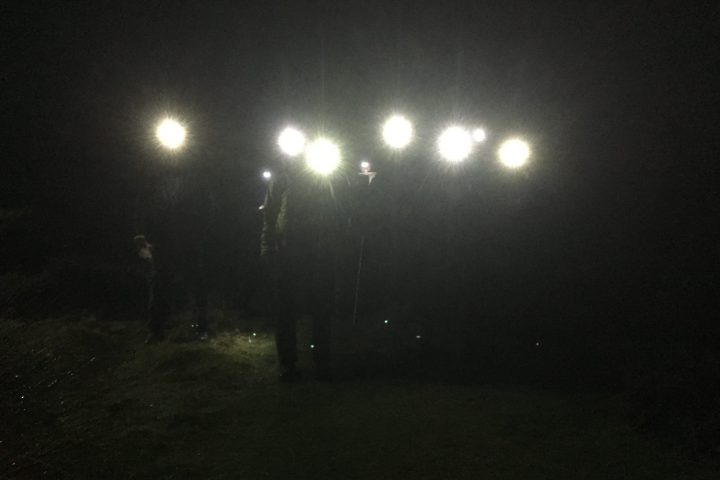 Recent interest in the organised Moonlight Challenge and all this talk about a super moon reminded me of a time when we used to hold night hikes once a month from November to February, on the Friday night nearest to the full moon.

These were all night affairs and on each of these trips we would have a nominal leader, plus half-a-dozen rival candidates for the post, which often led to some good humoured banter.  Sometimes we had moonlight, sometimes we had cloud and rain and, sometimes, we had snow.

The shortest of these walks was the Glenealo Horseshoe, starting from the hut.  We tackled Lug from several different points.  Starting from Glenmalure we climbed Lug via Art’s Lough and a scramble up Bendoo, returning via Cannow and Table Track.  From Aughvannagh we approached via the Ow Valley and the main gully in the South Prison, continuing on via the Three Lakes and Camaderry, and down to Laragh in time to catch the St. Kevin’s early morning bus back to town.

If the weather was wintry enough we would head up from Fenton’s pub at Seskin, bringing the tents with us for our winter camp on the summit.  From Knockree we crossed Maulin and Djouce, down to Lough Dan, on up to the Military Road and up and over Tonelagee and down for the bus.  From Blessington we went via Sorrel Hill, Black Hill and Billy Byrne’s Gap to Mullaghcleevaun and on to Tonelagee and Laragh.

On one of these excursions we had deep snow drifts and dense mist all the way from Billy Byrne’s Gap, making for tough going and difficult navigation, but Joan Flanagan, our leader on the night, coped admirably.  We had our reward as we descended towards Glendalough.  The skies cleared just before dawn and, as the sun peeped up over the horizon, it painted the snowy summit of Tonelagee a delicate, blushing pink, which ripened to a deep red, then orange and, finally a cheerful yellow.

The most testing of these night hikes was the Lug Walk, which at one time was considered to be a must prior to any Alpine trip.  On one of our Lug Walks, with Des Doyle as leader, we had starry skies, a full moon and a sharp frost.  Visibility was excellent, there was no call for map or compass and we skipped along over frost-hardened ground.  Well, some of us did.  Sean Barrett was breaking in a new pair of boots (plastic Koflachs, if I remember rightly) and by the time we got to Mullaghcleevaun, his feet were in rag order.  But he finished with the rest of us.

There was a time when our club fostered interest and competence in walking by organising fortnightly Sunday walks during the winter months, details of the routes being published in the monthly newsletter, or revealed on the previous Thursday night, so that those who wished could plot the bearings beforehand and put them to the test on the day.  These walks started from a wide variety of locations in Wicklow and we also made day trips to the Cooleys, Mournes, Galtees and Comeraghs, areas which can be reached much more quickly and easier now, with the proliferation of motorways.  The walks took place regardless of weather conditions, on the basis that foul weather provided the best test of navigational skills.  The result of all of this was that the club always had a core group of experienced walkers, with a wide knowledge of our mountain ranges which they were always happy to pass on to newer members.

Learn by Doing was the tried and trusted concept back then and it worked admirably well.  Nowadays the emphasis is on doing courses, but it never ceases to surprise me that anyone, least of all the members of a mountaineering club, should feel it necessary to take formal instruction in something as basic as hill-walking.  The thing is, for donkey’s years Dubliners, as children and as adults, have enjoyed walking in the Dublin/Wicklow mountains, without fuss or palaver.  When An Oige was in its heyday, back in the fifties and sixties, their Wicklow hostels would be packed to capacity every Saturday night as young people explored the nearby mountains.  As chisellers in Harold’s Cross, gangs of us would regularly throw a couple of hard-boiled egg sambos into our schoolbags and head off for a day in the hills and no-one would look up or down at us.  It was as common and everyday as using your jumpers for goalposts when playing street football.  In those days the schoolbags would have been the only bit of kit we took with us but, nowadays, we are urged us to tog ourselves out in expensive gear and equip ourselves with all kinds of gadgets before setting out for the hills.  It wasn’t always thus.

In his book, The Neighbourhood of Dublin, published back in 1912, Weston Joyce extolled the virtues of walking the Six Hills (the area between Stone Cross and Kippure) at a time when Dublin hardly extended beyond the canals and Glenasmole was so remote from the city that the Irish language had survived there until the nineteenth century.  And the gear Joyce recommended for these outings?  A pair of stout boots and a walking stick.  At that time I’m sure some would have regarded the use of a walking stick as smacking of ostentation.

J.B. Malone, the doyen of Dublin hill-walkers, in his book, The Open Road, published in 1950, was frugal in his choice of gear, too. He recommended what was known as The Russian Roll.  This was a raincoat, rolled width-ways and worn like a bandoleer, draped over one shoulder and fastened beneath the other with the coat belt, with the lunch stowed in one of the pockets.  Many of us, in those frugal times, would have regarded owning a coat with a belt as being a blatant example of conspicuous consumption.

Bill Murray, in his book, Undiscovered Scotland, recommended going out, alone, at night, in the depths of winter and trekking the snow-clad summits by moonlight, advice that would probably be frowned upon nowadays.  It is increasingly rare for us to be blessed with decent snow cover on our hills but, if the opportunity arises, you should try it.  The silence, the serenity and the soft, subdued light reflecting off the glittering snow slopes all adds up to a magical experience.

Our mountains are small by international standards, but they can provide much enjoyment and, sometimes, challenges, too and learning to cope with these challenges may serve well elsewhere, on more distant hills.  So, go on, spread your wings, get your boots wet and test yourself.  After all, we are members of a mountaineering club.  Shouldn’t we be doing what it says on the tin.