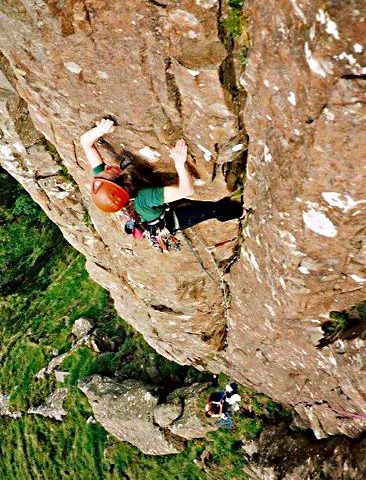 Transitioning from HVS to E1 is often a problem, not just because of the increase in difficulty but because of the mental barrier that comes with that solitary vowel at the beginning of the grade. Derived from extremely severe, it sounds like it should be as hard as it gets. The reality is that you are still firmly in the mid-grades. Nonetheless, it’s a red-letter day in any climber’s progression when that barrier is past.

My own first experience with the grade came as a second on the IMC beginners’ course. Out in the quarry one night Tony Groves placed me at the bottom of “Gargoyle Grove” while he walked up the direct version of the route (I didn’t know it at the time but he regularly soloed it!). Following after him, I struggled with the start moves but when I eventually scraped my way through, I dispatched the rest without much issue. I remember the euphoria of swinging across the slab at the top and thinking “sure I could lead that”! Later in the year when the days were starting to get short, I placed myself at the bottom of the grove to try and lead it. The start felt just as hard as the first time but when I scraped through it for the second time, I thought I had the route in the bag. However, standing at the top of the grove and looking at the traverse out left across the slab it felt a very different proposition than it had been with Tony’s rope above me. It was a much more tentative sequence that eventually got me across and when I reached the ledge before the top, I was gripped by the sight of my gear seemingly left far behind. The truth is though, the gear wasn’t that far away and if I fell it would have been fine but convincing myself of either at the time would have been difficult. I didn’t fall and after topping out, even though it wasn’t on-sight, I went away smiling and feeling like an E1 climber. This meant the barrier had been passed and when I would eventually on-sight one it didn’t feel like that big a deal (so much so that I don’t remember what route it was).

I wasn’t aware at the time but a few tricks you pick up as you go along could have made the process a lot smoother (though probably less memorable).

I threw myself into my first couple of climbing seasons and was out in the quarry every Tuesday and Thursday. At the time Gerry Moss led band of miscreants to whatever crag looked like it would be dry at the weekend. I tagged along on a lot of these and we visited Donegal, the Comeraghs, the Mournes as well as the more local crags like Glendalough and Luggala. Each venue brought experience on different types of rock, providing new climbing techniques and ways to place gear. This was done in the company of more proficient climbers, so there was always advice on what routes to go for, what gear to bring etc. This has defiantly stood to me on many a route since and hopefully on many more to come. With the number of indoor gyms available at the moment it has never been easier to get strong for climbing, similarly there are many providers who will give you some instruction on leading. While this is a great way to start there is no substitute for being on the sharp end of a rope and figuring things out for yourself. The more used to placing gear you are, the quicker you will recognize the best placements, the less pumped you will get. On the subject of being pumped, it’s the easiest way to fail on a route so it’s best to not let it happen. If you look at the best climbers, they rarely hang off of a single hold for very long. Constantly moving your hands and shaking out (while making sure you have the best body position) will do far more for your stamina than any number of laps at the climbing wall. If you are relaxed on the easier parts of a climb you have more for the harder parts. Simply put its a numbers game, the more HVS (or below) routes you do the easier an E1 will feel.

2/ Trust the System and Yourself:

Climbing at E1 inevitably brings you away from your gear. Being aware of the reality of the situation is your biggest asset, it is easy to get terrified a couple of meters above your gear and it is often unjustified. To keep on top of this it is good to have a system of mental checks. For me before launching into a crux sequence or a run-out section this goes something like the following.

Your own system may differ, but it does need to be habitual, so put in the mileage and practice it on easier terrain.

You’re not training, this is what you have been training for. Choose a route that gives you a good chance. If you are super strong from indoor climbing go for a steep, easy to protect route. If you’re not so strong but good on your feet, go for a slab or something more technical. Ideally, talk to someone who knows the climb and yourself. Don’t be ashamed to get the inside info on gear, hidden jugs, etc. The next one can be a pure on-sight if you are fussy about such things.

Finally, if you want to climb E1 (or any grade) just pick a well-protected one and go for it! If you fall off or rest on the gear it really doesn’t matter. Come back next time and try again, you will get a bit stronger/better with each attempt and when you eventually succeed a wealth of new climbs will be opened up to you.

Some Routes not to be Missed:

If it’s your first E1 it’s probably best to start close to home. For Dublin/Wicklow based climbers Dalkey Quarry has some fairly notorious E1 routes, but there are a couple that are good intros for the grade. I didn’t realise it at the time but “Gargoyle Grove” was a good first choice for me, the climbing is more technical than strenuous, and you are on your feet the whole way. You also get a lot of good gear in before the final section (bring some micros or peanuts for the start). For the strong, the well protected “Frenzy” is a good choice (small wires and cam). A word of caution, I once thought ticking off all the Dalkey E1’s would be a good idea, “Shuffle” changed my mind. There are several similarly sketch E1’s scattered about the quarry so choose wisely!

In Glendalough, “Setanta” is a nice, well protected, slab. The start looks a bit vegetated (and I suppose it is) but you are well rewarded higher up. “Concrete wallflower” will find your weaknesses with a delicate start followed by a steep, juggy finish. Though it is well protected throughout (micros for the start). After ticking those two, there is a nice combination of “Fanfare/Scimitar/Spillikin” on the main face that is well worth doing.

“Dance of the Tumblers” in Luggala is a good outing and unusually for that crag very amenable for the grade.

The Mournes has too many good routes to count, but if visiting Lower Cove “The Great Treacle Sponge Robbery” will feel soft if you are confident on your feet. “Swing Low” is steeper and well protected but no push over. “Cherub” at Spellack crag is also good fun and soft if you are tall.

Fair Head is great for the E1 climber, the Prow will not only hone your jamming skills, but also your ability to avoid the pump. “Midnight Cruiser”, “Fireball”, “Railroad” and “Fath Mo Bhuartha” will keep you occupied for some time.

When you have a few E1’s under your belt make a point of getting to Ailladie and climb “The Ramp”, preferably when there is a low tide in the evening time. E1 is a grade that opens up a wealth of fantastic climbs and every one you do will help you get that first E2 tick!!