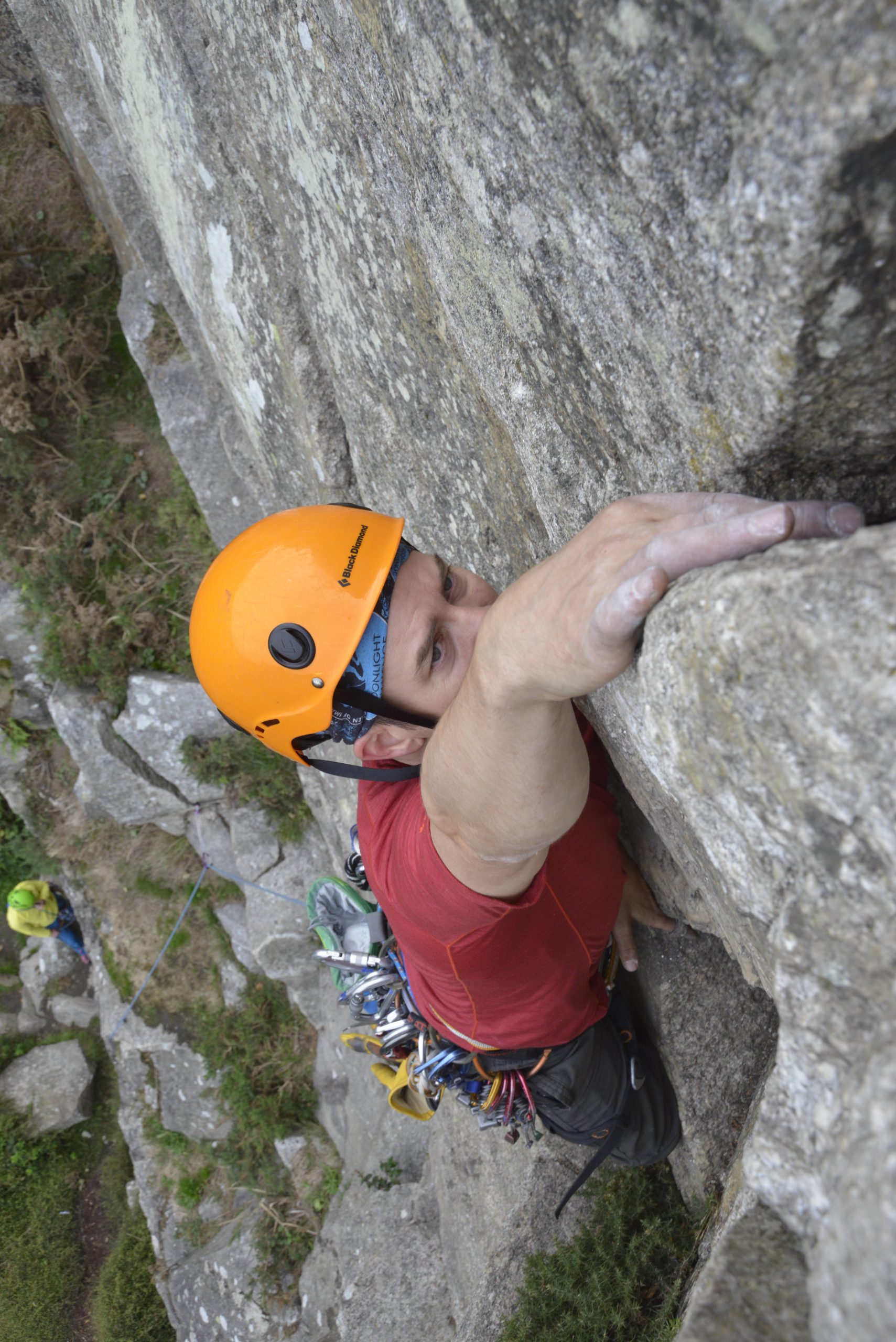 Andy Minshull took over the job of training officer in 2018. Here is his first-person account of the challenges involved in introducing a swathe of new members of the joys of rock climbing and mountaineering.

A flurry of WhatsApp messages checked on the train after work, a brace of emails and a gaggle of forum posts and the list was complete: My first Glendalough New Members’ meet as IMC Training Officer. When asked if I would step up to the dizzying standard set by Jon Smith, my predecessor, I was both honoured and concerned.  I had seen how much Jon did and with a busy job and young family was unsure I could give as much time. So at the AGM when formally “voted” in (no-one else volunteered!) I responded “Yes but I will need help”

The previous year a few of us at the Mournes meet had agreed it needed to be a team running the Introduction to Trad climbing programme. I had no idea just how much help I would get, and was truly overwhelmed some Dalkey evenings when we had more mentors than participants! (At least for the first hour, while the commuters did battle with the M50) So a heartfelt thanks to all of you who mentored even if it was only one evening, it made a massive difference to the quality of experience.

Still, the pressure was on for the meets, and for Glendo there is an added challenge that there is less lower grade climbing. With a range of mentors from ancient (20+ years climbing) to very fresh and youthful (on last year’s programme) we had to do some stealthy Scilla Black manoeuvres to get the right people with the right mentors. How successful were we? Hard for me to know – I’ll do another survey ?

The usual sun dances and prayers to various weather gods worked and the Friday and Saturday were almost too nice, a bit of sunburn on the Friday for some of us who had no idea we would need sun cream.

For those that managed to take Friday off work that was the best day for climbing – a small party, the crag to ourselves, well worked out partnerships.

Saturday was a great tapestry of IMC members on the crag, with multiple ascents of the classic Severe and Very Severe routes. We rigged an ab line on Forest ledge, which worked well, in hindsight some of us should have split over to hobnail as there was some queuing for routes. I chose a hideous route [Ifreann Direct?] to try and avoid the queue for Forest Rhapsody which my two faithful seconds did well to get up,  I thought I was falling off the alleged 4b crux several times!

It was a great atmosphere on the ground and up on the belay ledges. Wade brought some biscuits up which he produced just at the right moment.

Despite getting organised on Friday and pre cooking the curry for Saturday’s meal, the rice took ages but everyone seemed to cope with a late feast.  Sunday morning was drizzly so the mentors consensus was no climbing in Wicklow – Owen, Thomas and I had a great day in Dalkey on the way home along with Colm and his entourage including Lochlann and Vivien.

Slightly disappointed when I got home and heard the weather in Glendalough had actually been glorious! Should have ignored the drizzle especially when stood in the wrong valley. Still, a great 3 days of climbing.

The Mournes was again blessed with cracking weather and the Friday crew, encouraged by my, learnt the virtues of carrying heavy climbing gear up a mountain. I sold this as being great Alpine training. We got up high onto the Binnian Tors and did some good routes, though the gear was a bit flared and unsettling. Owen slipped and unfortunately his top gear ripped, and the first piece was not enough to save him from fracturing an ankle badly. Mountain Rescue were thankfully speedy to arrive and winch the patient out to Newry to be assessed. Walking back downhill was more fun than waking in, all obviously concerned for Owens well being.

Now the Mournes Cottage is great but small indoors and more and more people pouring in through the doors made it feel like Toners at Friday tea time pretty quickly. A good fire was lit outside and Simon and Darragh disappeared off to see Owen in Newry.

My highlight was doing Dots Delight which was ace but tricky to protect the second.

Another great atmosphere the following evening with guest chefs cooking up a storming curry for the masses – memo to us for next year, bring better kitchen utensils!

Simon and I went up to see Owen again, who was alright but not hearing much from the doctors so seemed glad of the visit.

Another groovy campfire ? outside and it  was nearly the longest day so the sunrise came round very fast.

I took it steady on the Sunday, Cillian and I both wanted to get home early so did some great routes on Pigeon. Came back to the hut and cleaned up – had a word with ourselves that next year we will make the rules clear regarding what is expected in a club hut.

Paid the farmer for the camping, hed given us a much better field this year – he donates all the cash to the Motor Neurone disease charity, so that’s got to be good karma all round – we are welcome back next year…

All in all I have enjoyed being training Officer this year, I had great support, and with a few subtle changes (and maybe a couple of radical disruptive ones) we will be back next year.

What about that improvers training I hear you cry? Check the forum, the training season is not over yet!