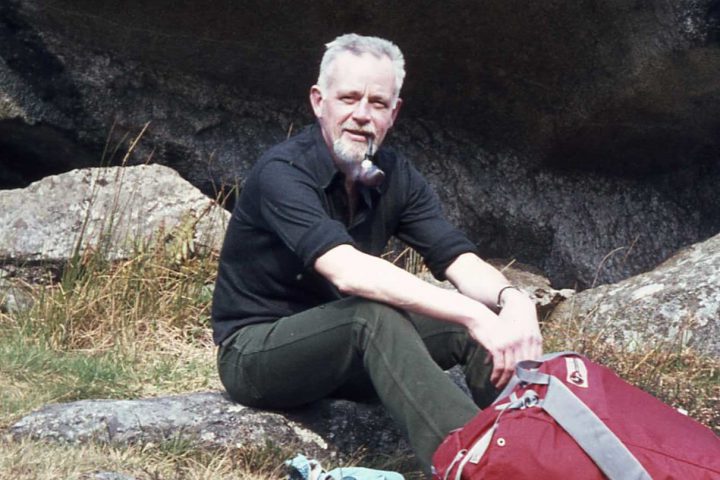 Long-standing Irish Mountaineering Club member Barry O’Flynn passed away in February 2017.  Barry was a past-President of the IMC and served at various times as club Secretary and Treasurer.  His five-year tenure as Hut Warden at the IMC Hut, Glendasan, in the late-60s and early 70s is remembered by many.

Barry spent his early years in the low lands of counties Kildare, Laois and Carlow where the scope for mountaineering was limited. On coming to Dublin in 1957 he joined the Club and the following year was asked would he take on the office of Treasurer. Very flattered he agreed although later on he realised he was offered the job because no one else would take it.  When Alan Blackshaw published his handbook Mountaineering in 1965 it included Barry’s Northbrook Road address as IMC (Dublin Section) Secretary.  Consequently, Barry was the point of contact for many visiting British mountaineers through the seventies.

When he took over as Warden, the Hut was in a very run down state. The Club was unable to finance professionals to restore it so with the help of a few members he undertook the renovation of the premises on a do-it-yourself basis: in the process he developed DIY skills as plumber, carpenter and block layer. The Cow House, which was a mere windowless and doorless shell, was transformed into additional sleeping and living quarters and yielded much needed revenue. The roofless ruin opposite the Hut was adapted to provide a toilet block and additional storage. Together with Fred Thompson and with occasional help from others they planted forestry trees in the field above the road and maintained the plantation for many years until circumstances prevented them from continuing with the work.

He led several beginners’ meets to the Austrian and Swiss Alps and organised a high level walking tour in the Pyrenees.  As an Alpinist he cheerfully acknowledged he was no Bonnington or Bonatti but he was a competent climber on rock, snow and ice and had successful seasons in Zermatt, Chamonix, the Oberland and the Dolomites. Amongst his better climbs he numbered many of the Chamonix Aiguilles, the Old Brenva route on Mont Blanc, the north face of the Aiguille du Bionnassy, a traverse of the Eiger, Mőnch and Jungfrau and a traverse of the Matterhorn.  He was a member of the 1964 IMC Expedition to Rakaposhi while, at home he edited the Donegal and Dalkey Guides and had many new routes to his name.

Paradoxically, while he objected strenuously to the publication of Mountain Log as he felt (correctly) that it would eventually supplant IMC Journal, Barry was the person who suggested the name!

Incidentally, the picture here was taken in Glendalough in 1973.

In his retirement Barry sought out battered and worn copies of the first climbers’ guides to the Irish mountains and rock faces which existed only in manuscript or duplicated form and republished them as printed booklets under his own imprint – Cló Ceó Draoidheachta [Magic Mist Press]. These he distributed free to interested parties and deposited copies in club and the Copyright Libraries.  Barry became known to a new generation of IMC members through his writings on the club website and a collection of his entertaining essays on an eclectic range of mountaineering topics can be found at https://www.irishmountaineeringclub.org/author/Magicmist/

With advancing years his regular mountain trips were curtailed but he could still be found walking the coast line near his home at Kilcoole with occasional forays to the Wicklow Mountains to revisit Lug, Tonelagee, Mullaghcleevaun and other summits.

Ever the man for detail, he planned his own obsequies; Requiem Mass followed by lunch for family, neighbours, friends and IMC members and ex-members of long-standing.  Later there was a private cremation attended by family and close friends.