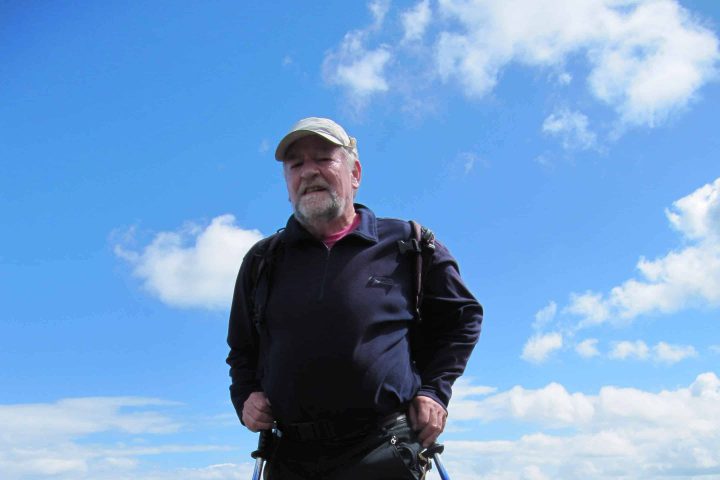 Paul Donnelly, who died suddenly last November, was an active IMC member from 1969 until his death from a heart attack at his home in Portobello. Paul grew up in Whitechurch near the Dublin Mountains and it is perhaps here that his lifelong love of the hills was nurtured. Secondary school was Westland Row, followed by an economics degree at UCD. His initial employment was with Roadstone, but he moved into the Public Service and spent the rest of his working life with Enterprise Ireland. Paul took early retirement and was able to devote his time between his many and varied interests.

It is this wide range of interests that best characterises Paul. He had a lifelong association with the Labour Party and often trudged the streets at election time for the candidates of his local branch.

Paul worked behind the scenes and produced policy papers on various economic and social issues to be included as Labour Party policy. I think he also enjoyed the social activities and enjoyed the parties hosted by his friend Mary Frehill.

Paul’s interest in the last few years was climate change and he was well read and informed on the issues. As usual he became an activist and sought to change and influence public opinion. He was a member of Friends of the Earth and made a submission to the recent people’s forum on the issue.

Paul was well-read and loved nothing better than a lively discussion with his many friends on current topics. On hill walks in Wicklow and elsewhere he was likely to stop in mid stride to make his point. One learnt to keep walking otherwise little forward progress would be made.

In latter years he took to year- round swimming usually in Sandycove or around in the Forty Foot. I would occasionally join him on hot Summer’s day and was always amazed at how long he stayed in the water, his distinctive red bathing cap bobbing in the distance. He wasn’t a daily swimmer by any means but in Winter seemed to be able to cope with intervals of two weeks at a time. As with all his activities the day was not complete without a coffee or two or a meal and a pint.

But it is as a member of the IMC that we will best remember Paul. He served on committees, was meets secretary in 1981 and was treasurer in 2004. His name crops up as a volunteer Hut warden on numerous occasions. He was also a diligent club Auditor for many years.

Paul was always ready to help even if it meant that he was put to some bother. It was typical that Paul came to the rescue of Des Doyle on a Saint Patrick’s week-end in the Lake District when he towed Des’s car to a garage for repair.

Scrambling was Paul’s forte and showed his calmness and steadiness to best advantage. In the Club Journal of ’83 Ingrid Masterson describes how Paul and herself retreated from the ridge of the Casnile in a thunderstorm with the ridge glowing and ice axes singing. Ingrid rightly worried but Paul took it in his stride. Dave Walsh has recounted the dramatic descent from the Piz Bernina after a storm enforced bivouac, Paul utterly unfazed and Dave apparently doing all the worrying. Not all ascents were as traumatic.

The traverse of the Piz Badile with Ingrid Masterson, along with Joss Lynam and Liam Convery in 1982 was fondly remembered by Paul as one of the highlights of his climbing career. They climbed the North Ridge, descended the South ridge to the Gianetti Hut in Italy and the following day walked back to their base in Val Bregaglia. Paul wrote an account of this in the club Journal 1983.

Paul loved walking and climbing in the Pyrenees and had many trips there on his own or in the company of John Patton, Brian Searson and John Burke. More recently he continued to climb in Dalkey, often with Con O’Shea and finishing with a swim in the Forty Foot.

I think I first met Paul on a meet to Skye in the 70’s but it was much later that we teamed up on numerous ski holidays and walking and climbing trips in Ireland, Scotland, Majorca and Greece. Some highlights for me include our Scottish trip in June 2006 when we climbed The Cobbler, Curved Ridge on Buachaille Etive Mor, had a wonderful day traversing An Teallach, and later also the traverse of Suilven.

In October 2008 we travelled first to Budapest and on to Thessaloniki in Greece. We had a glorious walk-in and climb of Mount Olympus just before the hut closed for the winter. We finished the holiday swimming and relaxing by the Aegean Sea. I particularly remember a fine August week in Kerry with Paddy O’Leary and Paul which finished with a climb of Howling Ridge on Carrauntoohil. Wicklow walking is what we did most often. Our last outing was on Scarr in late September and we finished with a meal and a pint in the Roundwood Inn. Paul had his favourite dish from their menu, chicken and chips with a side of coleslaw. He was to come with a group of older IMC members to Westport in October but pulled out of the trip at the last minute.

His sudden death shocked all his friends. We extend our sympathies to his sister Monica.