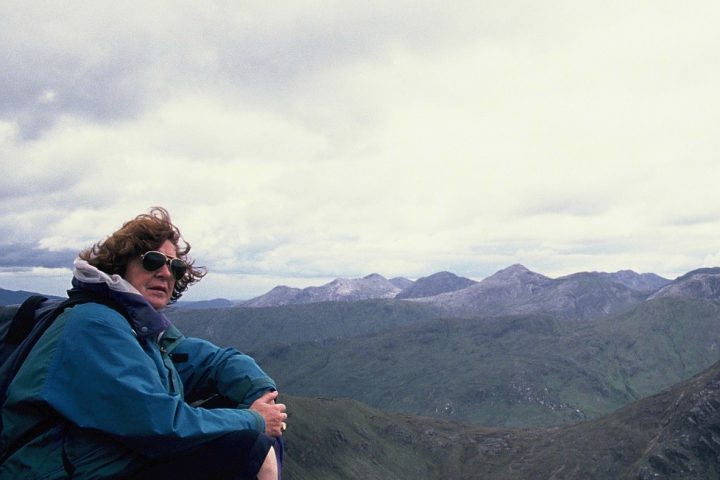 Patricia Flynn, who died suddenly at her Dublin home one August afternoon in 2019, was one of the great Irish mountain women and adventurers of the 20th century.

Through her love of mountains and intrepid sense of adventure she had already climbed Mont Blanc by the age of 20, having hitchhiked from Ireland to get there and back. She went on to break new ground, across Eastern and Western Europe, that others would follow over.

Here in a very personal memoir, lifelong friend and climbing companion Jill Rowe traces some of their trips over more than half a century.

“I met Pat one beautiful summer evening in Dalkey Quarry in 1959. We soon recognised we had the same love of walking and climbing in the hills and mountains.

From then on over a period of many years – between family and work commitments we managed great escapes and adventures.

We covered the ranges from the Mournes to the Kerry mountains, climbed and walked in the Cumbrian Lakes and the Yorkshire Dales, crossed the Cairngorms and the Cuillin Ridge. The weather was not always kind but we prevailed.

Interspersed with these trips we managed holidays in Europe. We tramped the Pyrenees – good huts, great food and lovely mountains.

Encouraged by Paddy Ferron, an early Irish Mountaineering Club (IMC) member we visited the Julien Alps – using his maps and instructions from his trip in 1939.

From there the Balkans called. Difficult to reach in the 1970s as they were part of the Eastern Bloc but we were determined.

We encountered many difficulties and setbacks such as lack of maps and guide books. But these were made up for by the help and directions we received from local mountaineers.

Parts of the Rhodopes mountains in Bulgaria are rugged and wild, the locals we met shared their food, taught us to forage and guided us on our way.

The Tatras in Czechoslovakia (now Czechia) are beautiful, routes well marked and with good huts.

They border Poland so were difficult to negotiate and were guarded at that time. We had a few brushes with the law but good luck prevailed and we managed to leave the country with no more than due admonishment from the authorities.

We went to Corsica and unexpectedly had snow but nevertheless enjoyed our accent of the Islands highest mountain, Monte Cinto and its clear mountain passes and valleys.

Next came the Carpathians. These are softer mountains, easier to traverse and easier to descend into the villages where we would eat and sleep. The people we met were friendly and curious, especially the shepherds. They envied our freedom to travel but were always helpful and kind.

There were other mountain ranges we climbed too – the Alps for example were just beautiful and majestic.

Throughout the years we also had many local days in the Dublin and Wicklow mountains. The week before Pat died, we visited Glendalough – our day filled with reminiscing of the wonderful times we were so privileged to share.

How I wish Pat could help me with this memoir now – if she could what embellishments and detail she would add.

But she will live forever in my heart as that great, loyal and adventurous woman, descending through a mountain mist on a winter’s day – snow on the ground, wearing shorts, her legs bare to the elements.  Her love of high wild places was second only to her love for family and friends.”

Patricia died in the arms of her soulmate and husband Joe. In addition to Joe, her son Michael and her grandchildren Alana, Stephen and Cian; she left behind so many friends on whom her mark is indelible and everlasting.