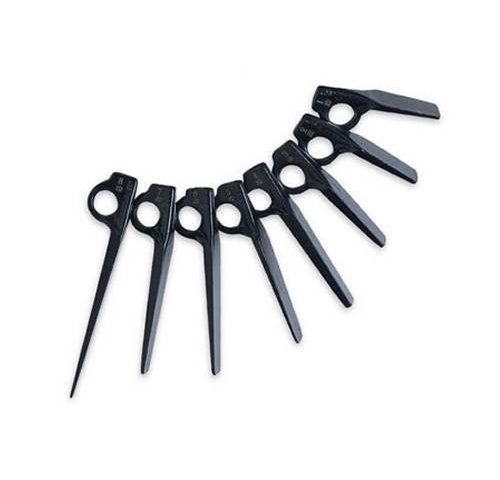 A post on the forum by Peter Wood regarding the demise of the peg on Setanta led to this short piece from Gerry on pegs: past & present.

It would be wise to assume that any pegs you come across at home here will have passed their best before date, as most of them would have been placed before the availability of nuts, particularly micro nuts, which came along around about the late seventies. In addition, the quality of the metal in some of the older pegs was quite poor, and they corroded rapidly, especially if, like the one on Setanta, they were placed in an area prone to seepage. Furthermore, there is no way of knowing for sure how many falls a peg may have held over the preceding years. On top of all that, some of the pegs were just poorly placed, to be used as a last resort.

On my first visit to Glendalough, myself and Alistair, both novices at the time, decided to wrap up the day’s proceedings with a romp up Holly Tree Shunt. But the upper section of the climb was damp and greasy, so I opted to finish up by doing Speirbhean. In doing so I discovered that the only protection on the climb was a peg a little below the crux. I was quite chuffed to be clipping into a peg – this was real climbing – and I finished the route confident that I was well protected. But subsequent encounters with pegs have long since curbed my enthusiasm for them.

There used to be a peg at the crux moves on Great Eastern. Prior to 1977 we used the peg for aid, you clipped in to it and then pulled up on it to reach better holds. With all this pulling and hauling the peg began to loosen in the crack, until some enterprising soul hammered in an old ha’penny at the side. After that, making the move at the peg always put me in mind of that popular, though rather bawdy, music hall song “Keep your hand on your ha’penny”.

Back in the seventies, when there was a peg at the crux overhang on Pit-Pat in the quarry, a climber came off while having a go at the crux and the peg just popped out. He took a long fall and ended up, unconscious, in hospital. When his climbing partner went to visit him, one of the nurses took him aside and asked him what was the reason the patient, while still away with the fairies, kept muttering repeatedly, “the effin peg came out, the effin peg came out”.

Many years ago I was belaying Suzanne while she had a go at Fang, which would have been her first VS lead. She cruised up the initial slab, but came off at the move level with the peg – and the head of the peg came off too. She took a long fall and ended hanging upside down with her head cradled in my lap (it’s moments like these that we gnarly old climbers cherish). Luckily, Suzanne escaped serious injury, but because she was wearing the briefest of shorts she received several cuts and scratches to her legs. I was pleasantly surprised, and quite moved, to discover that half of the lads in the quarry were keen first-aiders, all of them eager to tend to her wounds. The following week I replaced the broken peg with the one that’s there now. Because the crack is shallow, the only peg that fitted has a very short blade, so it should always be backed up.

The first time I climbed Concrete Wallflower in Glendalough, I was chancing my arm. I had no guidebook and only a vague notion of the line of the route. I could see the peg below the crux overlap, so I headed for that, but moved to the right above it instead of to the left. Realising my error I backclimbed down towards the peg but came off just above it and, keen to get in on the act, the head of the peg came off too. Fortunately, I had a good runner a short distance below, so no harm was done and I continued on my way.

There used to be a peg above the nose on In Absentia and it was welcome in the days before micro nuts, but it rotted to such an extent that one evening the late Jim McKenzie was able to crush it between thumb and forefinger, as if it were a dry biscuit. It was replaced and then, finally, removed, to leave the route clean these days.

At one time there were four pegs on Hyperion and the remains of the last one, with a broken eye, can still be seen just above the initial steep section. The other three were in the corner before the bold step around onto the face. When the first one began to corrode a second one was added and, finally, a third. They were all in rag order when they were removed and nowadays a couple of solid little nuts can be placed instead.

The peg on Helios is a special one. If memory serves me right, it was manufactured in Dublin, by the now defunct iron and steel merchants, Smith and Pearson, at the behest of a club member working for them at the time. Though more than fifty years old, it looks solid enough still but can, and should, be backed up.

There used to be three pegs on top of Ivy Chimney but this summer I could only spot two. They have been there for quite some time and one of them is a twin of the one on Helios. I see people regularly using them as anchors for top roping or for abbing off. Given my history with pegs I always prefer to back climb down the route.