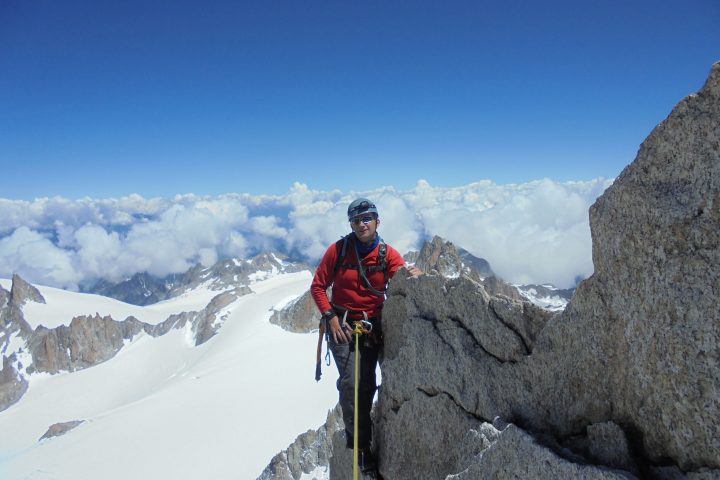 Last summer Declan Murray and I mustered up enough brownie points to get to Chamonix for a cherished ten-day climbing trip.

We have climbed together for over 20 years but funnily enough this was only our second trip to the Alps together.  As is the norm before a trip like this we had been training hard, staying fit and researching the routes we planned to climb before we flew out.

With family commitments it is hard to get away for much longer than a week. So, you are faced with a dilemma of having enough time to acclimatise for the higher routes and picking lower routes that are worthwhile to make the trip memorable and worth the effort.

Weighing this up we agreed on the Forbes Arête on Aiguille du Chardonnet (AD) as being one of our main objectives for the trip. The peak is 3,824 metres high and the route is typically done in a day return from the Albert Premier Hut, if you are going well.

With the pair of us a few years either side of 50 we tend to be a bit risk averse these days as an injury can put you out of action for precious weeks or months or could even jeopardise a trip like this altogether. So, we do our best to avoid injuries. An example of this strategy is stopping for tea and biscuits at the climbing wall mid-session while others like Alan and Terry opt to power through the tea break!

Well with bags packed and pre-trip jitters held under control I made my way to the airport full of excitement and enthusiasm. But en route to the airport I received a cryptic text from Declan.

He had an urgent trip to make to the dentist that very morning on his way to the airport. He had unfortunately developed a painful toothache and an abscess in the gum over the previous few days.

For a few scary moments I thought the trip was scuppered. Would he be able to fly? Would he want to? If we did go what condition would he be in? Could he climb? Could he eat biscuits?

The upshot was that he was given penicillin to handle the pain and would have to return to the dentist after the trip to face the music. The side effects of penicillin are plentiful, including the unholy trinity of nausea, vomiting and diarrhoea. And for the most unfortunate you can throw in dizziness and fatigue for good measure. All things considered he’s some man for one man as his prescription would last the length of the trip.

Most mere mortals would take this as a very valid reason to pull out of a trip and look after themselves. Good thing he’s a masochist. As it turns out we had a very successful trip, in our humble opinion. We ended up climbing five enjoyable Alpine routes in mixed weather conditions. Not a bad haul all in all. On some trips you’d be lucky to do two or three routes due to bad weather.

But it also included the type of heart-stopping adventure you don’t really want but almost invariably get on a big mountain trip.

And here is how that adventure happened:

A few days into the trip, we stepped out from the Albert Premier Hut into the dark and made our way across scree slopes and glaciers to the foot of the Aiguille du Chardonnet.

Our objective the Forbes Arête was finally on the cards. We weren’t alone. Half a dozen other parties arrived at the same time, heads down plugging towards the steeper ground ahead.

The skies were blue and the wind was a whisper. The scenery is stunning. The stillness making your senses all the more acute, listening to the satisfying crunch of hard snow underfoot.

Declan was suffering in a quiet way as we roped up with the condition he was in and the trepidation of the route ahead. Undeterred, he was resolved to climb the route.  Otherwise the conditions were perfect and who knows when we’d be back here again together. He was suffering from fatigue as a result of the meds so he asked me to take the sharp end of the rope for the day and go easy so he could keep up.

As a result, we had to drop our normal pace slightly to ensure we moved smoothly together. We were going to climb simultaneously on either end of the rope Alpine style.

To access the ridge, we meandered up a beautiful snow couloir that progressively got steeper and steeper, like a classic Scottish snow gulley. Occasionally we crossed a deep crevasses on thin snow bridges. One axe each did the job for a while, until we reached a big snow dome below a steep ice section. This was to be the first of the technical climbing. There was plenty of talk about black ice on this pitch the previous night in the hut, so I was expecting it to be difficult.

Still moving together, we started up the ice, both axes out this time. If Declan had been his usual self, we would have flown up this. But not today, our pace was slow. As I reached the crux of this pitch, the ice near vertical, (with no gear between us), Declan was exhausted at the other end of the rope. He was wading in energy sapping softening snow.

He came to a stop at the worst moment for me pulling the rope tight between us. I was only meters away from topping out of the steep ground but I couldn’t move as there was no slack in the rope, every climber’s nightmare.

I didn’t want to stop and place an ice screw as my arms were burning, I just wanted to finish it. Luckily, he soon mustered up a bit of strength and gave me enough slack to be able to mantle shelf up onto an ice ledge and rest my aching arms.

Next, we climbed a few enjoyable pitches of mixed ground to reach the ridge and we were rewarded with a spectacular view over the other side of the mountain and a rock-solid belay to settle the nerves. Declan soon joined me at the belay, and we sorted out the rock rack and had our first assessment of the ridge.

There are several pitches on mixed ground to reach the summit, my favourite type of climbing, one moment using ice axes, the next using finger locks and front points in a granite crack.

We would have to use all our climbing techniques to reach the summit and abseil back down the far side, as the route is a traverse. I left the belay now and followed the ridge placing slings, ice screws, and a typical rock-climbing rack on enjoyable ground.

The atmosphere was fantastic. The other parties were strung out ahead of us giving us a great idea where the difficulties lay and making us relax as we couldn’t really pass anyone, so the pace was fine.

A few hours had passed by now and the weather was beginning to deteriorate. We could see clouds making their way up the valley towards us. Route finding hadn’t been a problem up until now. That said, the descent has a reputation for catching people out, so the potential lack of visibility was a concern.

The team in front of us were moving very slowly now and we were acutely aware of it. We decided to catch up with them to see what was up. They were two young Irish lads, 19 or 20 years-old. They were both exhausted and their motivation had dipped to the floor. Their actions were a bit erratic and we were very concerned about them. The guy in front thought he was on belay, but he wasn’t. It took some persuading, but they finally agreed to let me pass them out and they tied on behind Declan.

So now we were a team of four. It was messy getting to the summit, as everyone was a bit flecked now. And the rope work was slow, adding to the stress. We crossed the summit and hastily set up an abseil down the far side of the mountain.

Two or three abseils down I realised we had taken the wrong bloody line. The weather was deteriorating now, and the light was fading. We were effectively in an avalanche shoot, a bad place to be in a storm. The three guys abseiled down to join me, and the two younger lads were truly exhausted. They wanted to call the mountain rescue, but I was trying to play it down.

As Declan and I looked for options one of the young lads collapsed in a ball and became unresponsive. It was at this moment we discovered the pair of them were on medication too. And they had both run out a few hours previously. So, decision made, we called the mountain rescue.

Not being rugby fans, we didn’t realise that France were playing an international match at the time. So, our pleas for assistance were greeted with tipsy giggles over the phone and reassurances that everything would work out for us. If we still needed help in the morning, they would be happy to assist.

Now that we knew we were on our own, very little light left I immediately started to prussic back up the last 60m abseil to a small cave we had passed on the way down.

Declan followed and we belayed the other pair up. Spirits were low, but we had to accept our lot. We had a cold night ahead. But now we had the security of the cave overhead to shield us from any potential rockfall or avalanche debris if the weather got any worse. It was too late to try to climb back to the summit ridge and the ground was too soft and loose. We would have to wait for morning and a good overnight freeze.

I have spent a few nights like this in semi hanging belays (should I admit this?) so I knew what to expect. Not much sleep, a wet arse and contorted positions for relieving yourself into the darkness. Good character-building stuff. At times through breaks in the cloud we could see the lights in the Albert Premiere below and we knew they were aware of our predicament. We took turns flashing our head torches for a while so they could get a fix on our position and relay this to mountain rescue for the morning.

The night passed without concern and in the morning the weather had improved. With a fewpercent of battery left on one phone we called mountain rescue and they were able to confirm our position. We were about 100m off route.

So I set off horizontally on lovely frozen ground to a huge snow field and dug out a big snow bucket seat and belayed the lads across. We were soon on the correct descent route and several abseils later we arrived back on the glacier, with relief written all over our faces.

We made our way to the hut picked up our belongings and walked down to the valley.  Back in Chamonix the warm shower and change of clothes were amazing. Then a leisurely stroll through the town to sample the delights of the Chamonix bakeries.