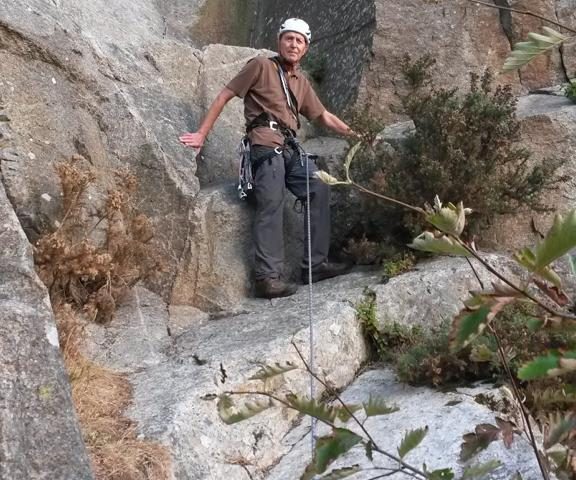 Helen Condon writes: My first impression of Ernie turned out to be wrong. He had the look of a climber of old – lean, slightly greying hair, pipe in hand, ready to regale the listener with tales of heroic vigils on hanging rock belays. But, in fact, I learned that he had taken up climbing in his mid-40s and had completed the IMC course in 1991 just a year ahead of me. All of which explained why, on our first rock sortie together at an evening meet to Hollywood crag, he got an attack of the dreaded “sewing machine” leg and backed off a steep climb with lots of dark mutterings. I warmed to him immediately.

Over the years, he worked away at his craft, honed his skill and notched up many notable climbs. Diagonal (HVS) on Dinas Mot in the Llanberis Pass area of North Wales was right up there as one of his proudest moments, certainly one that had him waxing lyrical with the minimum of encouragement. The guidebook describes it as “bold climbing of great delicacy” and when it was first put up by Birtwistle in 1938, it wasn’t climbed again for another ten years.

Climbing provided the backdrop to many adventures. Ernie had huge respect for the early pioneers in their tweeds and hobnailed boots relying on choc stones in gullies to save them from certain death in the event of a fall. Of course, we tried to emulate their spirit of exploration by sizing up various overgrown routes on the “will she go?” scale. One such expedition was an attempt on the Girdle Traverse of Twin Buttress in Glendalough. Put up by Betty Healy and Seán Rothery in 1961, the 1993 Wicklow Guidebook grades it “VS 325m” with a mere 20 pitches! This would be our “pet project” though we were defeated on pitch 4 by a very wet and slippery Ruth’s Chimney.

Aside from climbing, Ernie had many other interests – photography, jazz, cooking (French cooking, in particular, with its rich creamy sauces). He seemed to tread lightly through life, enjoying simple pleasures. And the perfect end to a perfect day would involve a pint of Guinness in a cosy pub where he’d withdraw into a deep reverie, enveloped by a fog of smoke from his beloved pipe….

Petrina Concannon writes: Although Ernie lived all his life in the inner city area, he had a more open and tolerant mind than many a well-travelled adventurer.  He adopted a thoughtful and introspective approach to reading and had an incredible ability to retain passages, facts and poetry. He had a particular interest in the classics, the World Wars, the early explorers to the Poles and Everest, and we enjoyed many an interesting conversation on these topics.

For a climber, Ernie had an ability to enjoy his daily pints of Guinness without it ever affecting his technique or his wiry physique. On trips away with Ernie, experience taught this wannabe climber that to avoid wobbling on climbs the day after the night before, a cup of coffee followed by leaving Ernie in the pub resulted in no side effects whatsoever for both of us.

Ernie was a fascinating guide of historic Dublin, and we enjoyed many a trip to Collins Barracks, maritime, transport and history museums. His absorption of facts was astounding, yet he did not have the typical ‘know all’ mind-set of the well informed and never imposed his knowledge, so his sheer passion for these subjects made these little outings a real pleasure.

One of Ernie’s proudest accomplishments was his renovation of the then rundown and decrepit Glendasan IMC hut, in his role as Hut Warden.  He singlehandedly repointed all the exterior brickwork and sorted out the plumbing issues. Current visitors to the hut would have no idea of the transformation that has since been wrought. One time, Ernie noticed the overflow pipe was blocked, and on inspection discovered a bloated dead frog.  Dismemberment was required, no better man! On another occasion Ernie found a rat swimming in the toilet. He promptly built a bonfire from all the bedding, cushions and sofa and organised a refit.

I got to know Ernest initially through climbing, and it is a mark of the man that he retained his climbing friendships beyond the mountaineering world. For me, mountaineering, history and tales of adventure are richer now thanks to the memory of Ernest Brace.

Moira Creedon writes: I was a clueless beginner when I met Ernie.  My clearest memory of climbing with him was seeing his bemused face at the top of some easy route as he watched my floundering. He was slumming it with me of course but still endlessly patient. Even though we hardly ever climbed together after my early days, he became a friend – partly because he lived nearby and mostly because of his endless kindness and good humour.

Cycling down the quays to work on a glorious sunny morning, I would see the wiry figure stepping out to cross the road, always reminding me of Strider in the Lord of the Rings heading off on a journey of adventure. Stopping to chat, he would often be walking from the Ha’penny Bridge down to the Glendasan Hut to work alone for a few days on the hut and then walk home to the city.  The hut was his pride and joy. Before Ernie took on the mantel of hut warden, the hut had collapsed to the point where you took your health in your hands staying there.  We shared laughs on the committee together for his years as warden when he passionately argued and convinced us to put a bit of money into the hut for the first time in years, doing all the back breaking work himself and rarely seeking help.

In his last few months, I was lucky to spend time with him on our way home from the wall and he regaled us with hilarious stories of his time in the club, and was so happy to see pictures of the hut with his beautiful pointing still intact, and to see how lovely the inside is now with the kitchen dresser and stoves leaving it hard to remember the rat bitten mess he took on. He was a joy to visit and was delighted to see us arriving in still covered in chalk.

Stepping into Ryan’s in Parkgate Street on a winter’s evening, I will look around for Ernie every time for the rest of my life and miss that quiet caring conversation and be glad that he was my friend.