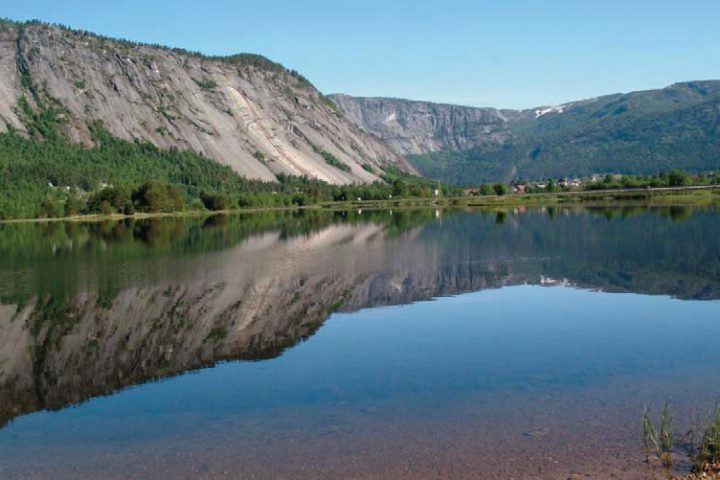 Welcome to Setesdal. A beautiful valley in Southern Norway flanked on all sides by huge granite domes and peppered with picturesque lakes, rivers and forests. Those granite domes mean one thing….slab climbing!
So it was with a little nervous anticipation that I arrived in the Setesdal valley eager to polish up my somewhat sketchy slab climbing technique. It was probably just as well that we arrived at 2am, sparing me an initial sight of our main target for the trip, the 850m “Monsterwand” , visible close to the road in Valle. I probably wouldn’t have slept too well.
Dave had picked out the campsite we were staying in and the location was top notch, right beside the river with great views and it also had a handy kitchen for whipping up our gourmet camping food. To save time , and money, we brought all our food with us in our luggage, something I would recommend for anyone contemplating this type of short trip to Norway.
Rural Norway has a stripped back appeal, no frothy cappuccinos, no wifi, no pubs and certainly no data roaming if you are wise. But for me this is one of the most appealing aspects of climbing here – it’s a wild and remote climbing experience in a first world country. Having said that you can make this type of trip as adventurous or as relaxed as you want. And Setesdal itself has all the bases covered – from roadside crags through to remote, adventurous mountain routes.

Sport or trad – take your pick. Or your picks even , if you come back in winter. And yes it does have bolts so you may laugh at my “wild” and “remote” comments!

Tired and a bit jaded from the previous evening’s long drive, Dave and I were fairly slow out of the traps on day one. We headed for Loefjell, about 15 minutes drive back down the valley. This is the jewel in the crown (according to the guidebook anyway) of Setesdal climbing. And we were blown
away! A seemingly unending sweep of rock greeted us as we stepped out of the car. You would have travelled far and wide for this – I suppose we had! Was it a mountain or a crag? The 1.5km wall was divided into a number of sectors – we headed for the “Plaisir –Picnic” sector which judging by the name anyway we hoped would ease us into the climbing. The climbing was indeed friendly – superb rock and friction although the bolts were pretty spaced. I guess if you were bolting 150+ routes you would be pretty sparing with your bolts as well!! At the top of one of routes I spotted a superb layback crack running 30m up the crag. No bolts on it and no route in the guide. With a harness full of quickdraws and no trad gear it was a bit frustrating to say the least!!

Having settled in to the trip we headed on day two for the aforementioned “Monsterwand”. The view from the road was jaw-dropping. A massive slab rising up 850m from the lakeshore. I tried to console myself with the fact that in Setesdal it barely got dark before midnight – although I hoped we wouldn’t be that long! The approach was via the quaint hamlet of “Bo” which could have easily figured on the Norwegian tourist board’s latest campaign.

Our chosen route up the Monsterwand was “Jotun”, a three star 5+ route. At 840m long it is the longest on the wall. However after two pitches it became clear that seepage on the route was going to be a problem. So on Pitch 3 we moved onto “Trolldans”, another three star route graded 6- .
The climbing was incredible, never particularly hard but massively run out. Some of the easier pitches offered up only 2 bolts for 60m. Usually you got a bolt at the crux but generally a fall would have been a cheese-gratingly bad idea. The odd trad placement was possible, usually a small cam but these were few and far between as the slab was mostly featureless rising up in seemingly never ending waves. Due to the dome shape you could never see the top which only added to the overall atmosphere. My footwork was getting a lot of practice at this point as the route was yielding about one handhold every pitch.

On pitch 12 Dave ran into a slight problem. He was forty metres out from the belay when he called back to indicate that the next bolted belay was under water! Unfortunately the huge amount of snow Norway experienced in 2014 was resulting in excessive seepage on the slab from melting snow above. We considered the options including a traverse or pendulum onto another route but it didn’t seem on. We had done the best climbing but with only two pitches to the top it was a bit disappointing not to finish. The next day we opted for another long multi-pitch route, again in Bo, this time on the “Neverland” slab. The curiously named “Captain Hook” was a slightly shorter and supposedly easier route at 5, 575m. It was a peach alright although we both felt it was harder and more sustained than the previous day’s outing. Mind you this time we got about two handholds per pitch. Small mercies. The guidebook had said to watch out for the “Black Mamba” on the seventh pitch. I wasn’t quite sure what to make of that – no more explanation was given. It seemed an unlikely location for an african snake or a lady of ill repute.

And so it was that I found myself on lead on the seventh pitch. The moves away from the belay immediately felt trickier than anything else the week had produced so far. It got steeper and the rock had a very suspect polished look, closer inspection confirming that it offered next to no friction. I was concentrating very hard at this point not to come off!! Then just to my right I saw it – a four inch wide snake of dark rock twisting its way out of sight up the pitch. The Black Mamba!
Don’t ask me what the geology was but the sandpaper like surface soon had me tip toeing steeply upwards through the polished wilderness. We topped out on Captain Hook and took a good break to take in the views before the long ab down.

We awoke on the final day pretty dog tired but a four day pass is a four day pass and that sun was still shining- who knows when we might see that again?? So back we went to Loefjell – a different sector this time “Brokkestoylen”. This is another top location – a really well bolted beginners and intermediates crag with thirty or so routes from 3+ through to 7. At this point our feet were really starting to complain so we took it fairly quietly, climbed a few routes and enjoyed the great views.

We didn’t even scratch the surface on this trip. The guidebook has over 500 routes in there and if you have more time there is clearly lots of potential for new, adventurous trad climbing. Everywhere you look there are walls and most of them are unclimbed. If you are planning a trip to Norway the best bet is to stay flexible and book at the last minute based on a good weather forecast. Ryanair flights actually go down in price nearer the time – we booked one week in advance. The drive from Oslo Rygge to Setesdal is about 5 hours.

So if you feel your footwork needs a bit of a tune-up we can highly recommend Setesdal – the Scandinavian Slab clinic.
I’m still a ropey slab climber but I got a helluva lot of practice!!