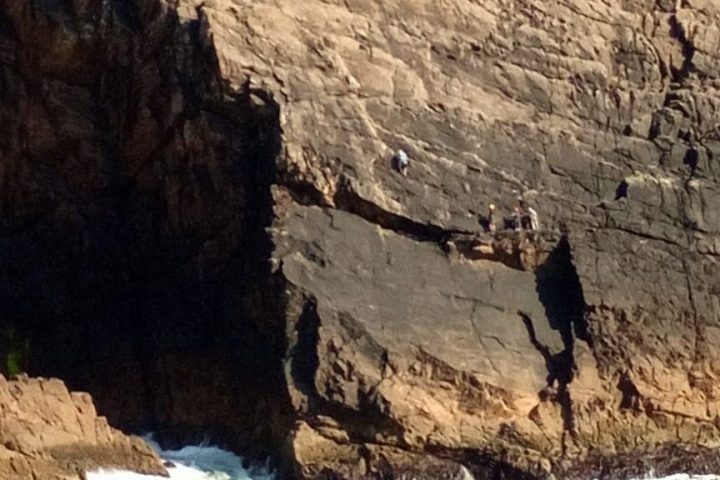 Over an extended weekend of the 15th, 16th, 17th and 18th of July 2021, a successful trip was made to the Mullet peninsula, exploring the potential of new sea crags. A high pressure which settled over the country along with good rock and great company helped to make the weekend very enjoyable.

Four different sea crags were explored, one at Annagh Head where we camped/campervanned and three more on the West side of Erris Head. The Annagh Head crag was just ten minutes walk and the Erris Head crags were a thirty minute walk on a good track from the car park at Danish Cellar.

More than 25 new routes were done, ranging in grade from D to VS 4c and with almost everybody attending taking leads. 12 people attended, including Adele and Christina from the IMC beginners course who put up two new routes each.

I am informed that the rock is metadolerite , it was solid and mostly excellent on all routes. It was possible to walk or scramble to the base of all the crags above the high tide mark, although some abseil lines were set up. There was generally good protection on all routes and there was always good good rock features for belay points at the top of the routes.

The mornings began with some light mist, on one morning producing a mist bow. With the mist, the lower rock, which is washed in storm conditions, was a bit greasy but once it burnt off and the sun hit the rock there was good friction. Some of the locations were spectacular with the sea gently breaking on the rock below the climbs. All of the crags have potential for more routes and there are more crags to be explored in this area.

The farmer John Kilboy who owns the land where we camped at Annagh Head said that the rocks there were the oldest in the world, there were some of us who may have been around at the time they were formed!