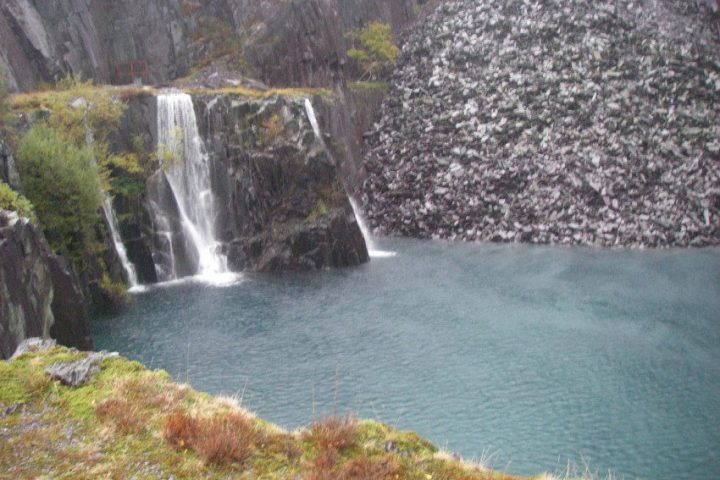 Nicely put. My sentiments entirely. Pleasant as the fluid moves on sun-kissed rock are, and comforting as the sound of ice axe clunking into solid green ice is, there exists, in between these two extremes, a whole range of interesting situations worth experiencing. For rock boots perform almost as well on wet, clean rock as they do on your everyday dry commodity, and to be plucked at and buffeted by strong winds adds an extra sense of exhilaration to even the most modest of climbs.

So, when the weathermen promised storms across Wales over the bank holiday weekend, we felt no cause for alarm, merely a sense of been there done that. The first effect on Friday morning was the cancellation of all fast-ferry sailings and a delay in departure times for the other ferries. Nonetheless, all of us who sailed out that morning got out on rock. Sile and Dave were luckiest, with a dry afternoon and evening on the seacliffs of Gogarth. Dorotha, Gary, Mags and myself headed for Tremadog, where we were joined by Niall, Aidan, Cearbhall and Dave K (they having cast a cold eye over a mist-shrouded Dinas Mot at the top of the Pass on the way). We enjoyed some pleasant sunshine for a while and Niall and Aidan topped out before the rain moved in, while Cearbhall and Dave were caught on the last pitch. Meanwhile Gary and Dorotha were being introduced to the delights of Poor Man’s Peutery. When the rain came, it arrived, not gradually, but instantly and copiously, streaming down the rock and accompanied by strong gusts of wind. For us, it was a case of deja vu, for Dorotha, caught right up on the traverse around the nose, it was a new experience, but she led on in fine style. By the time Gary took over for the last pitch they were both soaked but still climbing steadily. Then it was a case of slipping and sliding down Porkers Gully and back to the car. The drying room at our hut was pretty full that night, but it coped admirably and our gear soon dried out.

Later that evening Dan, Vanessa and Emma arrived to join us . On the Saturday they opted for Idwal Slabs, as did Niall’s gang, while we returned to Tremadog. We all got to finish our respective rock routes before the rain arrived again, driven by even stronger winds, but some were caught while scrambling off. After we finished our climb on Bwlch y Moch Mags and I succumbed to greed and headed on for a visit to Craig Gesail, a new venue for both of us. Here Mags got to lead two pitches before the rain swept in and we swept out as darkness approached.

Our hut had an impressive array of equipment, including an elaborate fire alarm system but, mindful of the stormy conditions at sea, Aidan thought it might be a good idea to initiate a lifeboat drill and, to add a touch of realism to the affair, hold it during the small hours of the morning, a plan he was cute enough to keep to himself. So, at two am. we were all roused from our slumbers and marshalled down the stairs where we observed, with bleary eyes, all of two inches of water sloshing around the washroom floor. After a brief period of contemplation, it was our unanimous opinion that, if we were to meet a watery end, there was no better place to do so than in our warm and comfy bunks. So we all trooped back upstairs again, with much mutterings of mutiny and even talk of Skipper Aidan being made to walk the plank. Thankfully, by breakfast time the water had passed on and was but a dim and distant memory.

It says a lot for the huge choice of venues on offer in Snowdonia when I can record that, after decades of climbing there, I visited an area that was completely new to me on the Sunday. Cearbhall and I had discussed the route known as Snakes and Ladders and Tunnels last year, but had agreed to leave it for another time, when the weather might be more inclement, so it was on the agenda for this year. It was Cearbhall who had done the research and it was he who led the team of six into the Dinorwic quarries on Sunday morning for what was to be the ultimate magical mystery tour. What followed was a fascinating and, sometimes, taxing excursion, firstly up a steep, wet wall, via a rusty chain, then through a maze of tunnels; up a selection of precarious ladders; down a couple of thought-provoking abseils, all the while passing through a sometimes lush, and sometimes barren landscape. All of this culminated in the crossing, by some, of the infamous Bridge of Death. In one of my frequent Senior moments, I had left my camera safely at home, so all photos here are courtesy of Cearbhall. Vanessa has promised to supply photos of her team’s excursions and we hope to bring those to you at a later date.

While we were thus engaged, Dan led a party of six up into the notorious Lockwood’s Chimney, a rite of passage for all first-timers on the October meet to Wales. Meanwhile Niall and Aidan, feeling energetic, ran up and over Snowdon. We gathered in the common room in the evening where we were fortified by goodies supplied by Emma and Dan, entertained by Sile’s accounts of former exploits and impressed by Vanessa’s enthusiasm and organising abilities.

On the Monday those of us booked on the 5.15 pm ferry were disappointingly transferred to an earlier sailing, due to high winds, thus scuppering our plans for a final fling, and this was all the more frustrating as the rain had cleared by eleven. Dan’s team were due out on a later boat, so they got to climb Snowdon before departing, while Sile and Dave, who were also due out later, headed for Gogarth. So, despite being on the edge of one of the worst storms to hit Wales for decades, we were up and doing every day, and why not. As I have said here before, it’s one big all-weather playground for mountaineers. Where else would you want to be. All in all then, a memorable weekend. 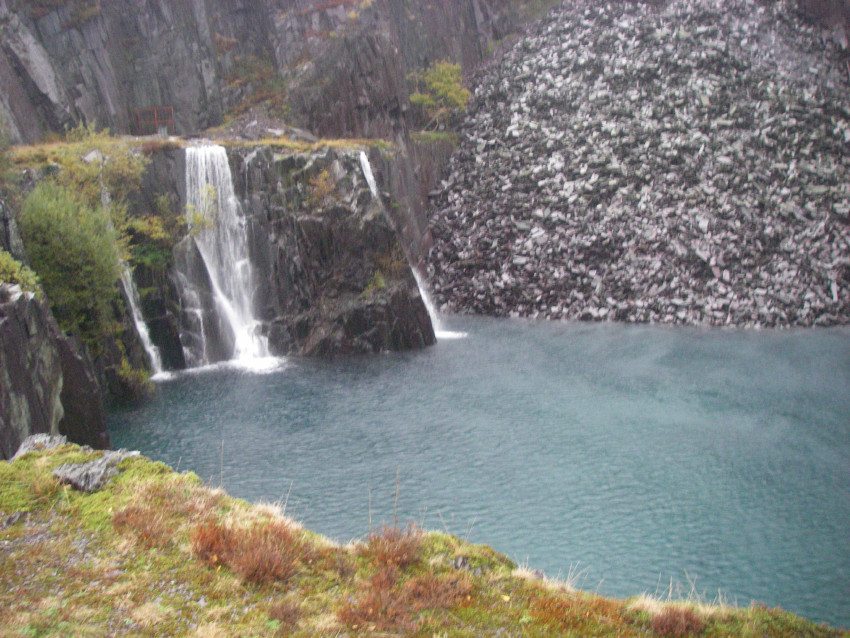 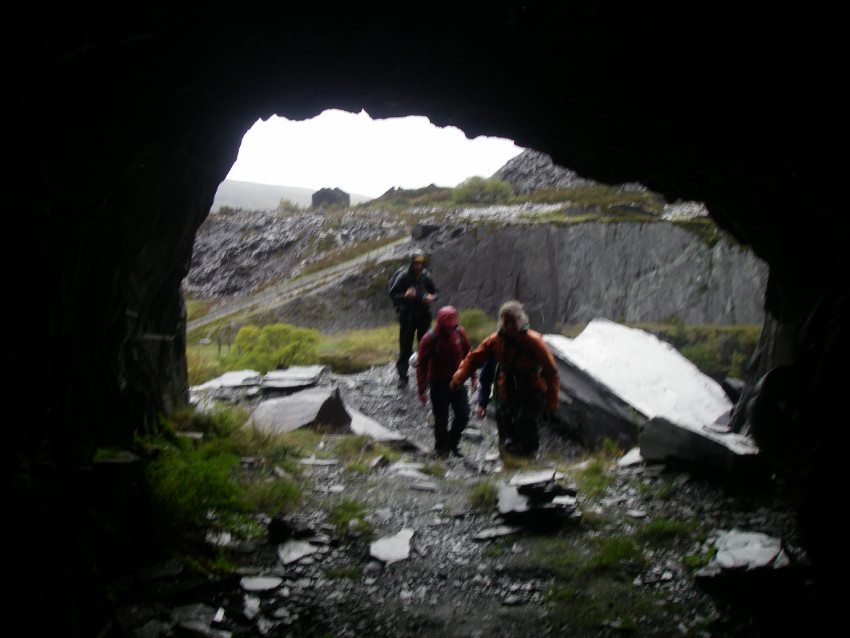 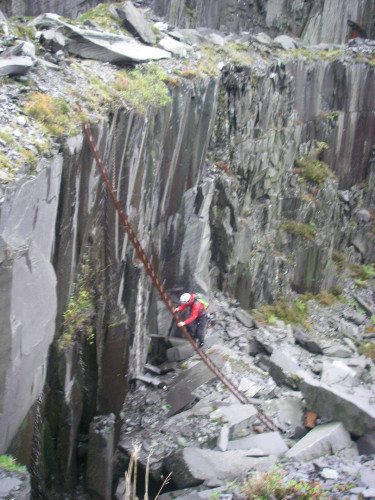 Eat your heart out Tim Fogg.

Born on the wrong side of the track.