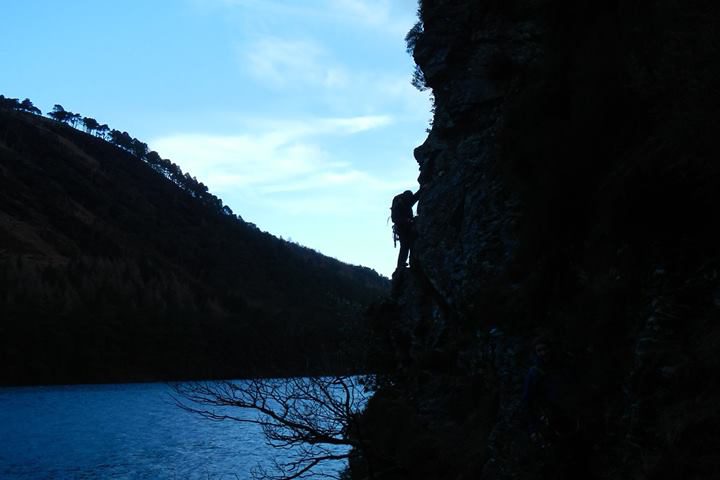 “In Glendalough there lived and old saint, renowned for his learning and piety.
His manners were curious and quaint and he looked upon girls with disparity.”

17 souls gathered in the Glendalough Upper Car Park on Sunday February 15’th for a pilgrimage in the footsteps of one of the earliest locals, the infamous misogynist St Kevin. Led by our own Kevin (Coakley) who indeed must have the patience of a saint, he shepherded his flock on a circuit of the Upper Lake. As we left the tourist trail we noticed a lakeside bench well submerged in lakewater, perhaps a sign of what was ahead that we…maybe should have paid more heed to it.

Our trail continued under the Spinc, conditions being rather soft underfoot. The first obstacle is traditionally negotiated ‘Tarzan’ style with a swing from the trees but on the day an abseil was the chosen method for most. 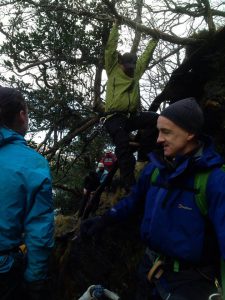 We then came to Kevin’s Bed itself, a section of rock with many old pegs insitu. A rope handrail was put in place and one by one the lost sheep crossed, each stopping to peer into St Kevin’s Bed, a small cave in the rock face. The cave is man-made and probably pre-dates St Kevin (c 500-600CE) 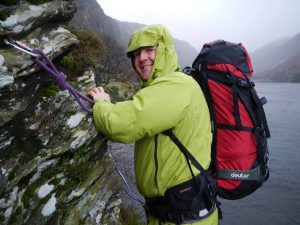 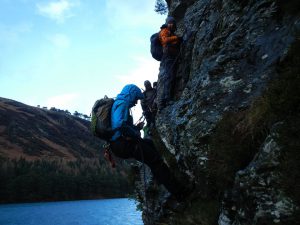 This refuge was also apparently used by others such as St. Laurence O’Toole and Michael Dwyer in their time. As we continued on another rock traverse was roped and that brought us to what should have been a walk along the shore except that for us it was a delicate rock and turf traverse, a sort of shallow water solo, the path below being under half a metre of water. Indeed some of our party just stepped into the cleansing waters of the lake hoping to wash away their sins if not the muck on their boots. We then reached the ruins of an old church which must be one of the most inaccessible historical sites in Ireland. 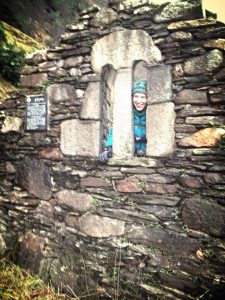 Continuing on what we now thought would be easy ground we came to another impasse as our path again disappeared in to the lake waters. After some debate in the now fading light, we decided to take the high road. Our advance party climbed a greasy chimney to reach a tree that could be used as an abseil anchor. Kevin then descended into the murky vegetated gloom and after some time we were relieved to hear a shout that he was now on safe ground. One by one the pilgrims then followed on, and then we could finally put away our ropes and gear.

It was a beautiful mild spring evening and although sun had long ago set, a full moon now rose over the Spinc to light our way home. Crossing the river was our final hurdle but Niall, Tina & Barry went ahead and found it was easily forded at the Miner’s village. With the moonlight shimmering on the lake, a short walk soon had us back at the car-park, just a little later than planned but all in good spirits. 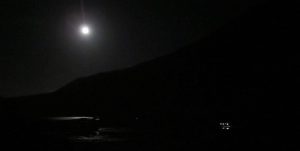 We retired to the hut to regroup where we found Christy had a roaring fire in place to welcome us. The finest selection of confectionery and cakes was then produced for what was a grand birthday feast (Vanessa’s) for which we certainly now had an appetite to do it justice. Serenaded by Kris & Colm the party then continued long into the night. 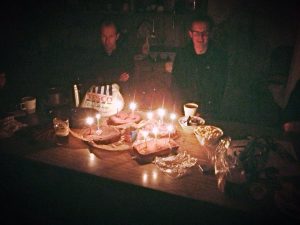