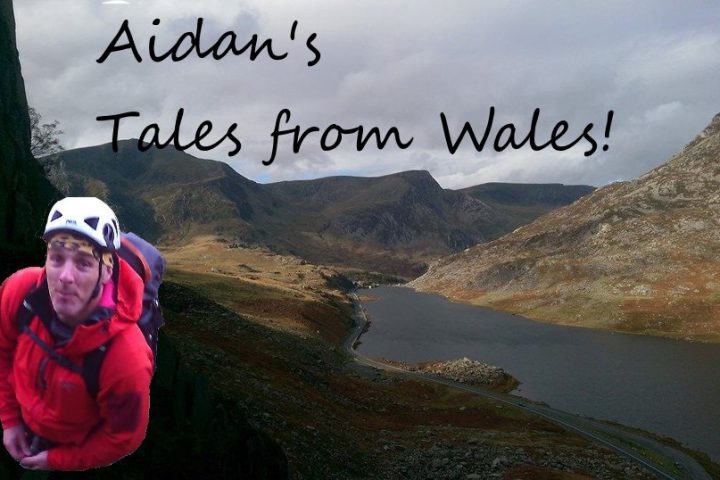 An early start got myself, Niall and Cearbhall on the 8.00 crossing to Holyhead for the start of the October Bank Holiday weekend trip to North Wales. I spent a short while walking around the ship to see if I could spot any of the other participants/victims but had no luck. I assumed they were on another deck. It was a fine morning with calm seas. Enjoying a coffee and a bit of chat I noticed a ship pass on the port side (thanks Cearbhall). I asked the lads what ship that was. ‘It’s probably the fast sailing to Holyhead’ says Cearbhall. ‘Why didn’t we get that?’ I asked. Niall who had booked the ferry was at a loss to explain why he had booked the slow boat. He has some form when it comes to ferry bookings so we let it lie…eventually!
We were staying in Bethesda, so with a better than expected forecast we continued up past Llyn Ogwen and parked in under Milestone Buttress on Tryfan (still not sure how to pronounce this). We had decided to have a go at Grooved Arête. At an amenable grade, and it being already lunch time, it seemed like a sensible option.

We geared up by the car and set off up the track under Milestone Buttress in the direction of Heather Terrace. It’s a steep pull initially. I passed Cearbhall at one stage and made some comment about the unexpected fine weather. It was meant to be crap. Anyway, Cearbhall growled at me so I left him too it. Niall was ahead and he eventually got to the foot of the climb which isn’t difficult to find. Some helpful soul had scrapped a big G.A. at the bottom of the first pitch. I commented to Niall that Cearbhall was ‘blowing hard’ on the way up. He arrived and we started to gear up. It had taken us about an hour. 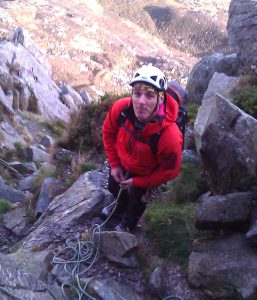 Harness and rack went on and Cearbhall flaked out a rope. I asked were the other rope was. That’s when the fun started. Niall turned to me with a look of disgust. ‘What do you mean, you didn’t bring it?’ ‘No I didn’t. No one asked me too.’ It wasn’t as pleasant as that. I was asked what kind of eejit I was to go climbing without a rope or rack. It was pointed out to me that Cearbhall was ‘blowing hard’ because he had the foresight to bring a rope. It was too late to go back and get the other rope it being already 2.30. We decided to climb on the one 50m half rope. The leader could tie-in in the middle, and the other two at each end. It would mean taking intermediate belays but at least we could all climb.

Niall led off up first pitch. No sooner had he started than we had to let him know he was down to 5m. It was going to be like that all the way up. He made himself safe and told us to follow up. Cearbhall set off and I followed closely behind. Grooved Arête is a Welsh classic. With that, everything is extremely polished, and with all the recent rain most of the cracks and corners were like bars of soap. Cearbhall had not made it to the first belay and he was already on his ear. He didn’t get much sympathy. There was plenty of sniggering.

Niall decided he’d keep leading for a while and we left him too it because we had only the one rope, and myself and Cearbhall were too busy taking selfies to send to Dave Keogh, who had to pull out of the trip because of exams. We moved up without any difficulty, being carful of the polish and wet and eventually got to the crux. Initially Niall said that one of us should do this pitch but as we got up to it he changed his mind. He wanted to do it now because he had taken a fall on it on his first year climbing. The Knight’s Move pitch is great. Easy climbing with a great feeling of exposure. He brought us over and decided to hand over. His chublets were cold. He’d a hole in his shoe and his feet were wet. He suggested I do the next pitch.

The next pitch is up a steep easy corner. All the footholds were wet so I was trying to be careful. From below I could hear the two lads laughing as they tried to get a photo of themselves and me climbing above. 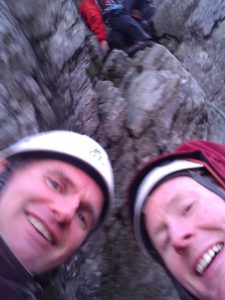 Talk of moons, arses etc. drifted up. Fantastic belaying. I got up to next to last belay and handed gear over to Cearbhall. He finished the last couple of pitches and we topped out just shy of the top. We shared out our chocolate Santa. 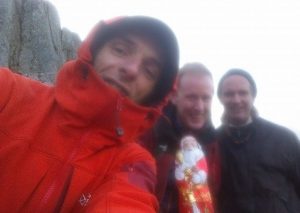 I had bought one in Bethesda where they are already gearing up for Christmas. It was close to 5.00pm as we packed our gear away. I only turned my back for a second and the two lads were gone. They had made sure I was at least bringing the rope down. I followed them down a gully which would bring us back down to Heather Terrace. I randomly rubbed some chalk on bits of rock and we wondered what Ambrose would make of this. His crusade against chalk was a hot topic on the way down. I was falling behind the two lads enjoying the colours of the late autumn evening when I realised I was alone and surrounded by a large swarm of goats. In the fading light I had walked into the middle of them and I gave them a fright. I ran off to catch up with the lads but I was too late they had pushed on and were back at the car. It was fully dark by the time I made it to the car and it started to rain. I hoped we beat the IMC after-dark curfew. We retired to the pub in Bethesda for beer and buns. All agreed it had been an excellent afternoon on the hill and Grooved Arête is definitely worthy of it’s 3 star status.
The October Bank Holiday was off to a good start.