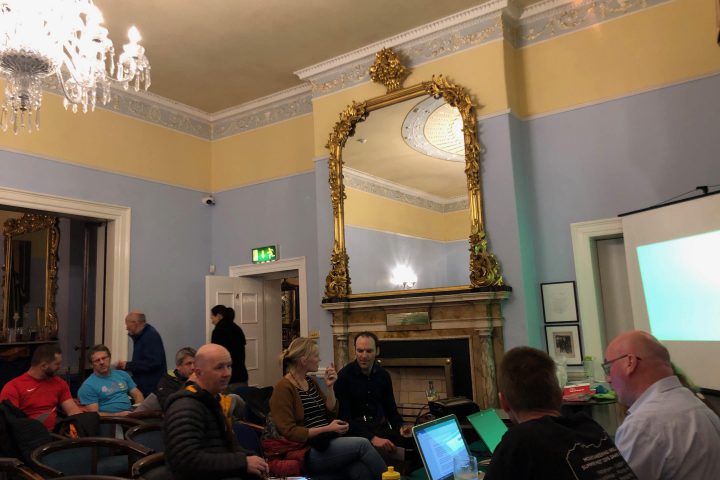 The Annual General meeting was held on Tuesday, November 28th,  at the Teacher’s Club. While there was a hugely entertaining discussion going on on the Whatsapp group about taking dogs on the hill we were badly struggling to get a quorum.
I’ve probably been at about five or six AGMs at this stage and three times we have just about got over the line with 25 full members. It’s dispiriting to see us struggle to get the number, especially as many of those attending are those who do all the hard graft each year to make sure the club survives and thrives. We have 309 members and part of being in a club involves taking on a bit of responsibility. I know that attending such meetings is not everybody’s cup of lemon tea but it’s a once-a-year experience – a bit long admittedly but nothing worse than a Michael D Higgins speech.
Looking around last night I was reminded of when I was starting off in journalism in Galway years ago. There was an ancient guy who used to write the local notes from the Claddagh. Anything with even the most remote connection to the neighbourhood near the city centre made it into the column each week.
One week he delivered the following story (just to note that Live at Three was an RTE programme aimed at an older audiences that was broadcast each afternoon):
“The final of the Live at Three talent competition was on RTE this week. One of the heats was held in the Claddagh. (theer’s the tenuous local connection!!!). I have to say it was most disappointing. Not alone was it the same set as last year. But it featured all the same performers  wearing the same costumes as last year. And worst of all, they all sang the same old songs.”
The old codger never realised he had actually been looking at a repeat of the previous year’s final.
And so perhaps to avoid us having a repeat of the same old songs (and barely reaching the quorum) each year, perhaps some others should show up. We had one new member there last night (out of 100). We should aim to do a bit better in future!!
There was also some very detailed discussion on training, the hut, publicity, the members’ contact booklet, our use of Group Space, as well as the dominance of the Whatsapp group over everything else! It included some sharp criticism (some of it actually justified!).
For the record the new committee officers are: Cillian Russell (President); Peter Wood (Chairman); Matthew Sammon (Secretary); Sé O’Hanlon (Treasurer); Andy Minshull (training); Derek Hendrick (Meets); Harry McGee (Publicity); Petra Tolarova (Membership); Jane Irvine (Archives); Ed Hick (Hut Warden); Aine O’Reilly (Ordinary Member); and Darragh Doolan (Ordinary Member).