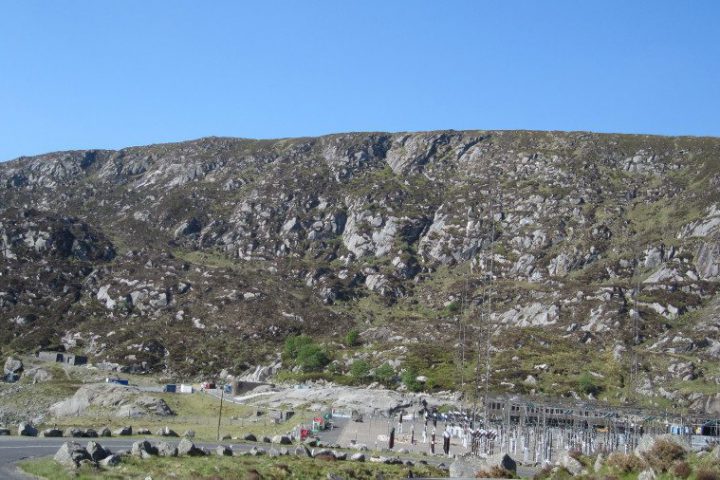 (by Gerry Moss, December 2013)
New crags and new routes at Lough Nahanagan near the Wicklow Gap

LOUGH NAHANAGAN
Nestling in a secluded hollow, overlooked on three sides by steep and craggy slopes, Lough Nahanagan and its environs are worthy of attention. Although quite close to the road, it maintains a sense of remoteness in spite of the ugly ESB compound on the western shore. The sun catching slopes overlooking the compound are studded with interesting slabs and buttresses but many of them are prone to seepage (the fact that they are directly below the reservoir may have a bearing on this) so any prospecting would best be done after a dry spell. 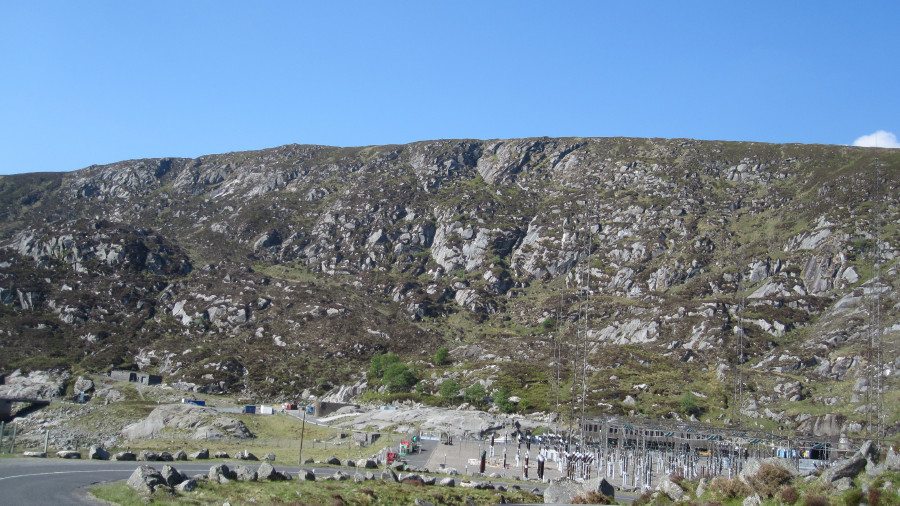 During severe winter weather, such as we had early this year, this seepage can pay off, however, with a wide selection of iced up gullies, corners, ramps and slabs giving plenty of sport, and I have spent many a pleasant hour pottering about there with a lovely combination of sun, snow and ice. If we are lucky enough to get another decent cold snap this winter it is worth noting that, because the power station is manned 24/7, the Council works hard at keeping the road over the Gap open to traffic. 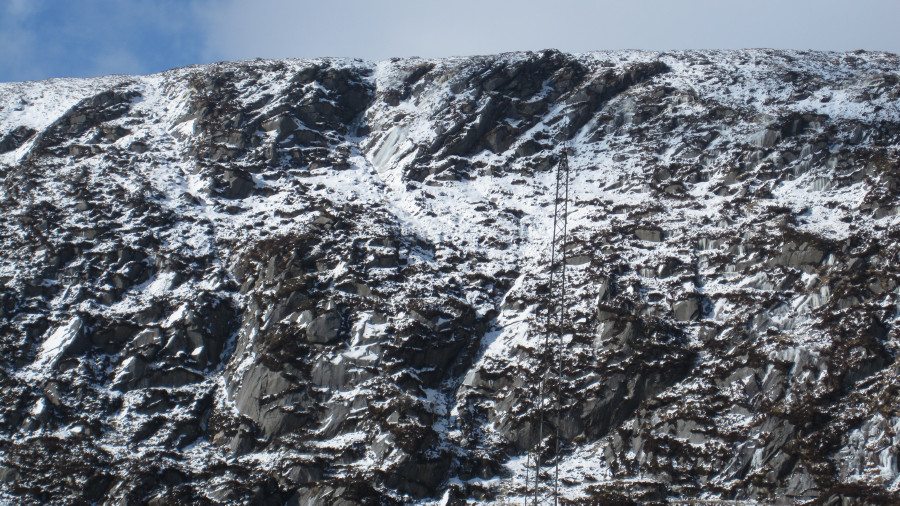 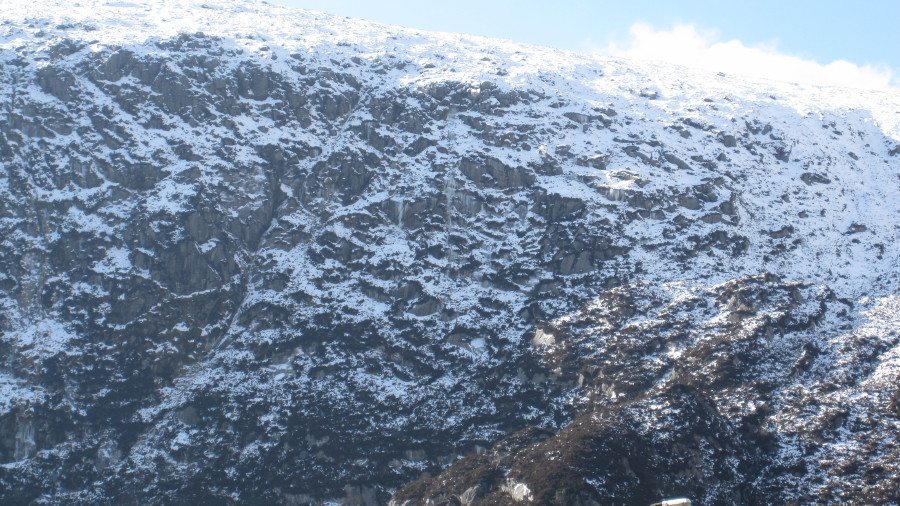 This gully is only ten minutes from the carpark.
The south and south-eastern slopes also have a fair amount of rock, but sunlight is more fleeting hereabouts. Good winter conditions are often to be found here too, as was discovered by several teams (which included our own Padraic Gibbons and Dermot Shiels) early this year, when some new winter lines were added.
In addition to all of that, there is, tucked away on the shoreline at the southernmost corner of the lough, two contrasting crags of interest to climbers, one a rather smooth slab and the other composed of steep rough granite of good quality.

All of twenty years have passed since the day I first climbed there. As it happened, it was on the same day that former IMC member, Ronnie Wathen, was laid to rest in the little cemetery beside the church up on Calary.
Climber, piper and poet, Ronnie was one of the most colourful characters ever to have graced the membership list of IMC. He was active in the early years of the club, while living here as a student at Trinity College, and was involved in pioneering new routes in Wicklow and Donegal, before moving back to London. He kept in touch, however, and returned frequently over the years, on trips that combined visits to the crags, the Piper’s Club and various haunts of traditional musicians. He would sometimes turn up on our meets to the Lake District too, bringing along his beloved set of pipes.
We quit the climbing early that day and drove over to Calary to pay our respects. He was given a great send off and the church was packed, wall to wall. A collection of pipers, climbers, academics and Icelanders (relatives of his late wife), all gathered on a lovely autumnal evening to celebrate a life lived to the full.
It had always been my intention to list the routes we climbed that day so, having eventually taken some photos of the routes, it’s a case of long threatened coming at last.
Approach
Approaching the Wicklow Gap from Laragh turn off just before reaching the crest of the Gap and drive down the access road towards the ESB power station, parking at the junction (there used to be a rustic picnic table and benches here in bygone years).
Take the surfaced road to the left, (pedestrian access at the gate) and follow it to where it ends. Go up around the top of the fence and drop back down to find a narrow deer path running parallel to the shore of the lough, between the rocks below and the boulders above. Occasional small cairns. When the path fades take to the boulders and follow a line along the highest ones until, shortly after reaching the trees, dropping down to the shore of the lough. A little over 30 minutes from the car. Alternatively, traverse around above the power station and above the western shore to reach the same point (rough going and nearly always very wet underfoot). 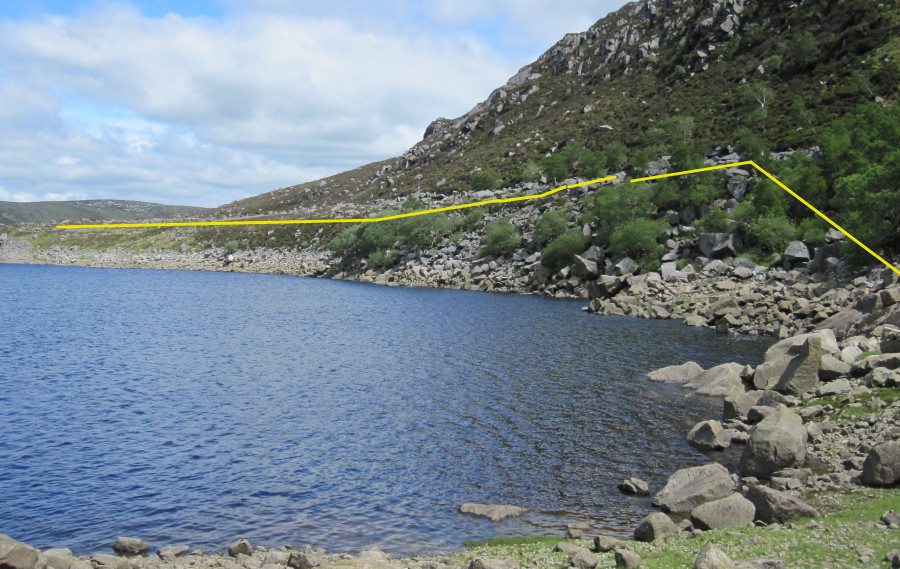 The climbs described.
PINE TREE SLAB.
A slab on, and at right-angles to, the shoreline on the southernmost corner of Lough Nahanagan. There is a solitary pine tree just above the toe of the slab. The gentle angle and the quality of the smooth, compact granite makes this a good place to hone your slab climbing technique, and an ideal spot for a bit of soloing. But the climbing is only part of the picture. Out of sight of the power station, sheltered from the wind and open to sunshine in the mornings, with only the soft slap of the wavelets against the toe of the slab and the occasional honking of the small flock of geese living on the lough to impinge upon the senses, there is a nice feeling of remoteness about this pleasant spot.
The slab, which is just over 20m at its highest point, is bounded on the left by a grassy gully, which has a large birch tree at its bottom and a smaller one near the top. The climbs are described from left to right. Small and medium friends and hexes, as well as small wires, are useful. Descent is down along the crest of the slab to where a short fault line slants back right (looking out).
1. Chanter. Diff.
Start near the bottom left of the slab, 3m right of a birch tree, on a flat boulder, at the foot of a clean toe of rock. Step up and right to reach good holds. Move back slightly left and go straight up, continuing on good holds to belay in a small rocky bay, just below the top.
E. Hackett, G. Moss. 11/9/1993.
2.  Grace Notes.   V. Diff.
Start 3m right of Chanter, below a vague fault slanting up left. Follow the line of holds to join the previous route just below the belay point.
E. H., G.M. 11/9/1993.
3. Piper’s Lament.  Severe.
Start just right of the bottom of a thin, white quartz vein which slopes up to the right. Climb straight to the top, difficulties increasing with height.
G. M., E. H. 11/9/1993.
4. Slow Air.  Mod.
Start at the centre of the slab, 2m right of the start of Piper’s Lament, below the start of the obvious wide fault line sloping up left. Follow the fault to the top, to belay as for Chanter.
E. H., G. M. 11/9/1993.
5. The Flat Set.   VS 4c.
Start near the right-hand end of the slab and 1m left of the bottom of the short, wide fault line sloping up right.
Climb straight up, crossing the line of The Pipes Are Calling, and step right to reach the foot of some thin, shallow cracks by delicate moves. Finish up these with increasing delicacy. Poorly protected.
G. M., E. H. 11/9/1993.
6 The Pipes are calling.   Severe.
Start near the right-hand end of the slab, at the foot of the short, wide fault line slanting up right (this fault line is used in descent). Scramble up the fault for 2m and make a long step out left to gain an intermittent fault running up diagonally left across the slab. Follow this, with some delicate moves, to finish up as for Chanter.
G. M., E. H. 11/9/1993.
BIRCH TREE BUTTRESS.
This is the buttress to the left of, and at right-angles to, Pine Tree Slab. There is a birch tree at the bottom right of the buttress. There is a lot of excellent granite here and there may be further possibilities but a lot of the buttress is prone to seepage after wet weather.
1. The Wild Geese. VS 4c.
Start at the front of the buttress, near the left-hand edge, below and left of a wide bay, at the foot of a crack and shallow right-facing corner, sloping up from left to right. Climb the crack on good holds to a ramp and move up left to the foot of an open-book corner just right of the arête. Climb the corner until it is possible to bridge out left to a foothold on the arête. Airily up the arête to a belay in a niche on the left. Scramble off right (facing in).
G. M., E. H. 11/9/1993.
2. Goose Bumps.  H. Severe 4b.
Start below an obvious groove on the right-hand side of the buttress. Climb the groove to a ledge. Make a difficult move back across right to gain a ramp. Follow this easily to a belay just below the top. G.M., E.H. 11/9/93 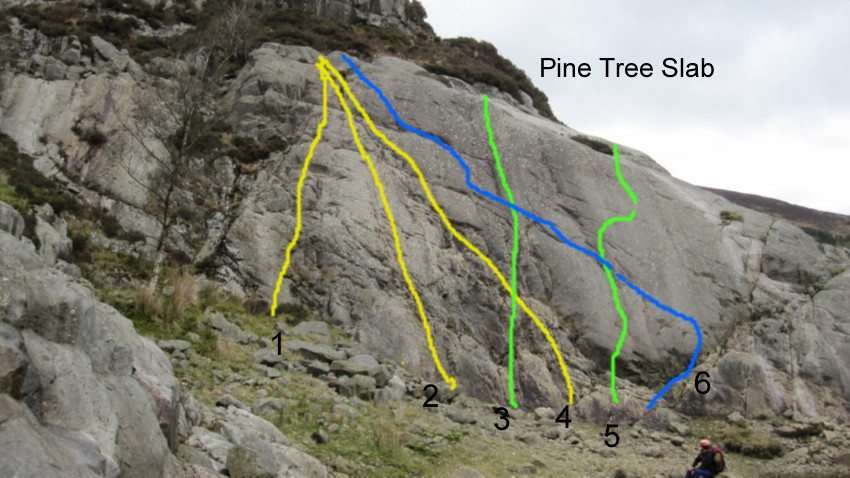 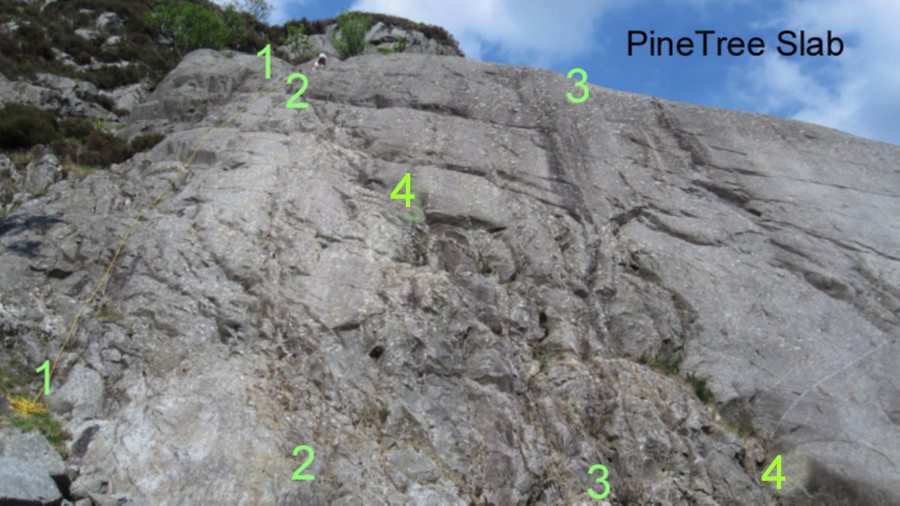 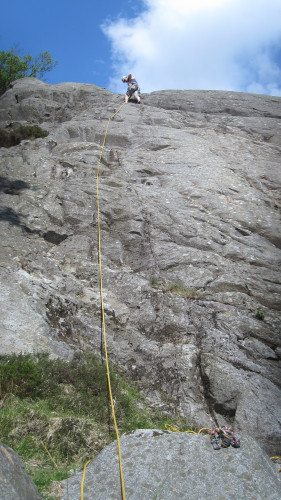 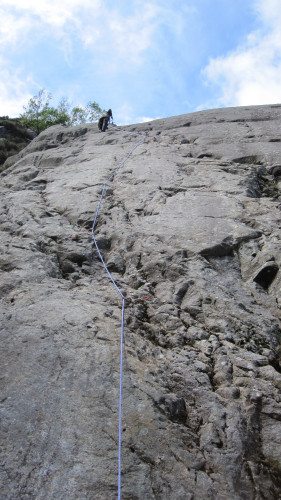 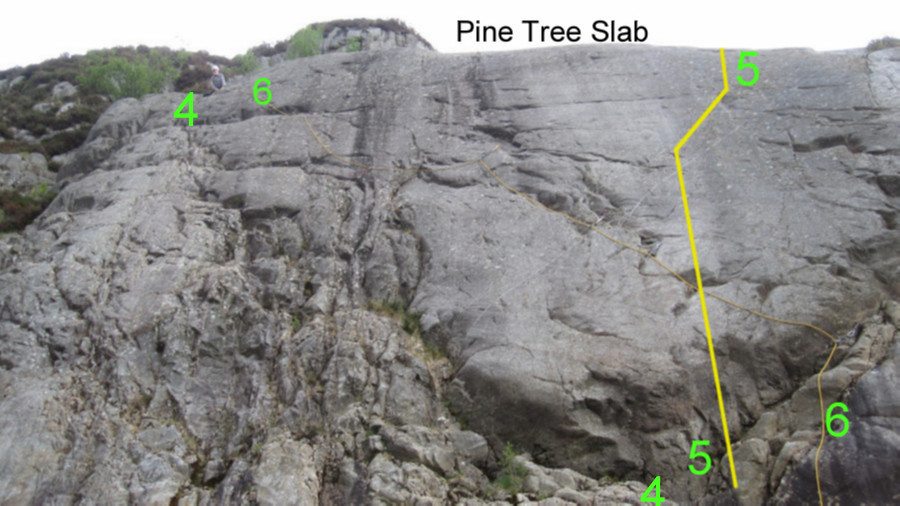 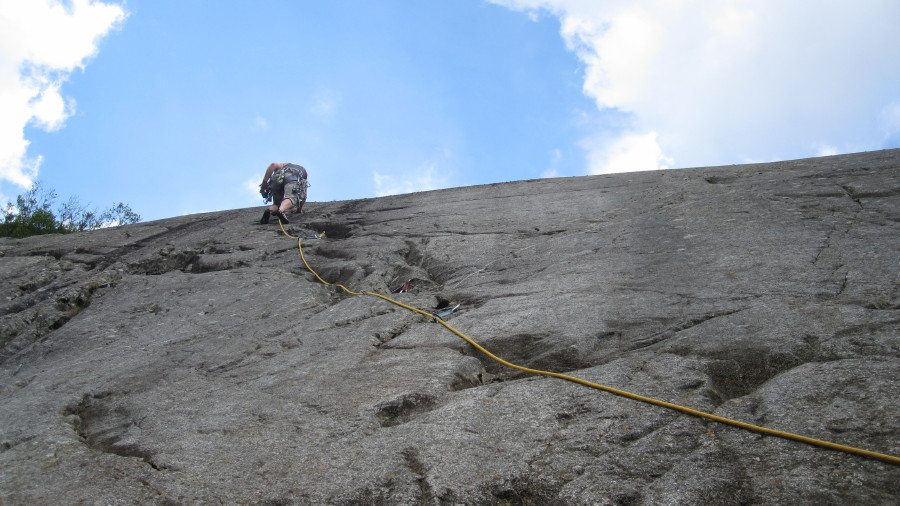 Mags on The Pipes are Calling Severe. 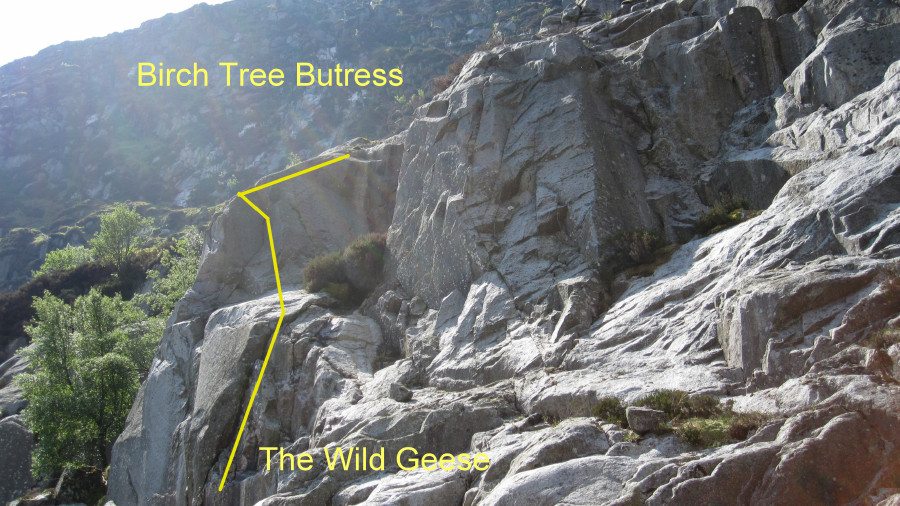 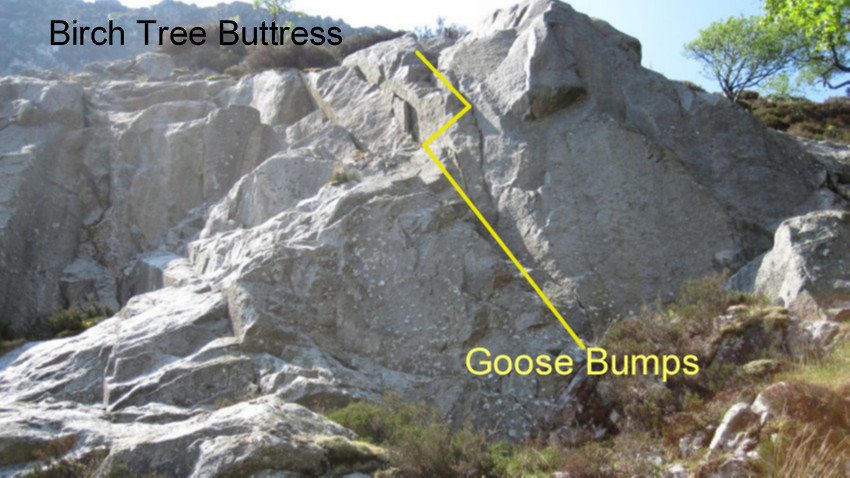 The Dark Side of the Lough. 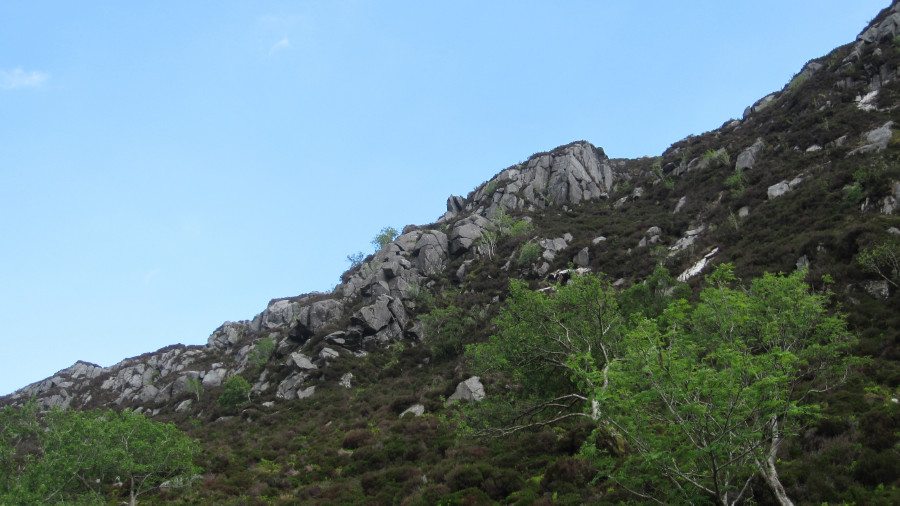 While climbing on Pine Tree Slab over the years I noticed an interesting rock ridge in the centre of the slope overlooking the eastern shoreline. Forked Buttress is not at all apparent when traversing in along the lough shore from the east, but its potential becomes obvious when viewed from the west. In March of 2012 Cearbhall, Joe and I toiled up the steep vegetated slope to the foot of the buttress, which forks just below its top, we tackled the right-hand leg and were pleased to discover it provided four pitches of rock, some of it quite difficult, all of it needing a bit of tidying up as we progressed. The result was Pump It Up, an entertaining multi-pitch route with the crux at VS. 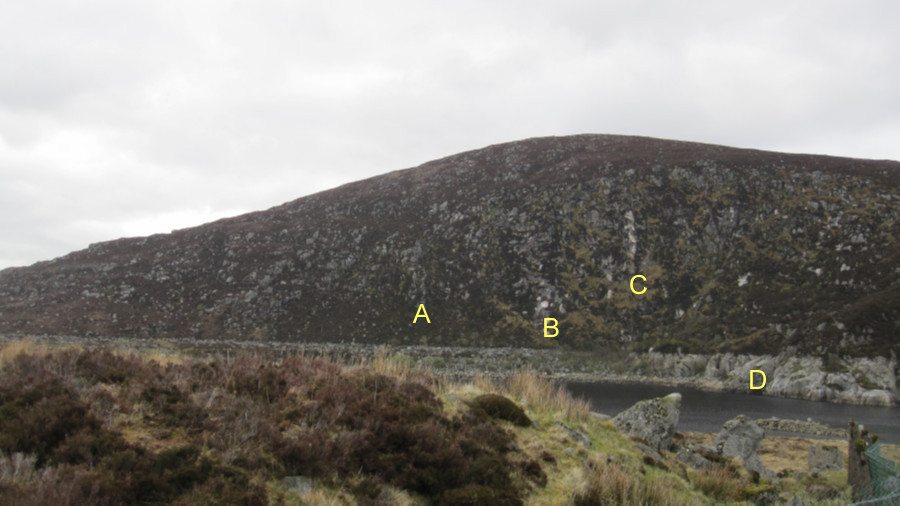 View of buttress from near Pine Tree Slab. 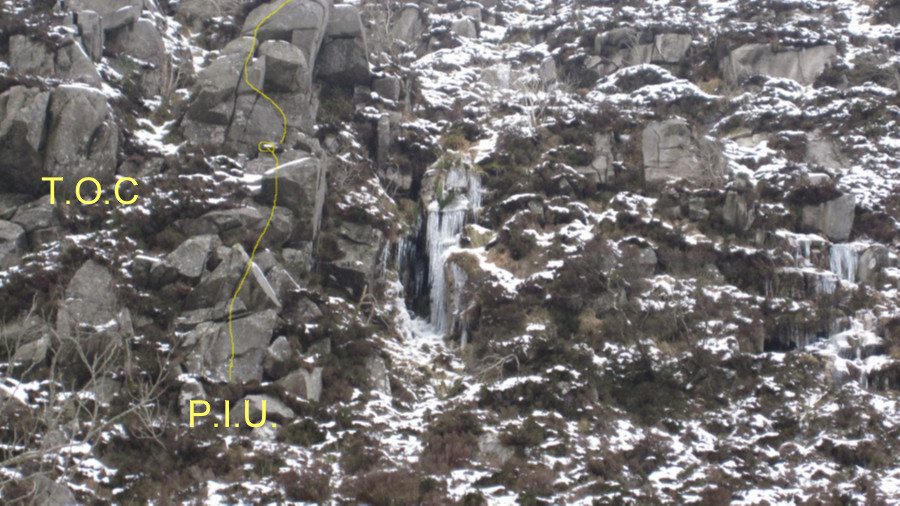 Winter view of ridge, with start of both lines marked and first two pitches of Pump It Up shown.. 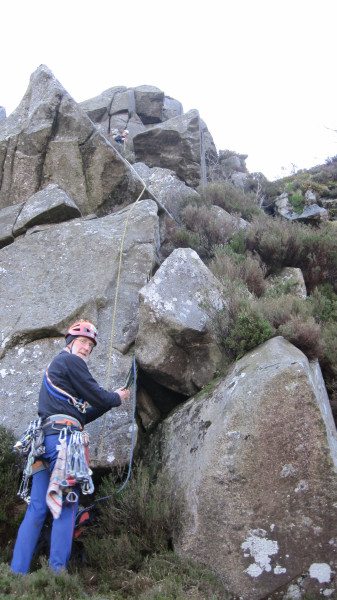 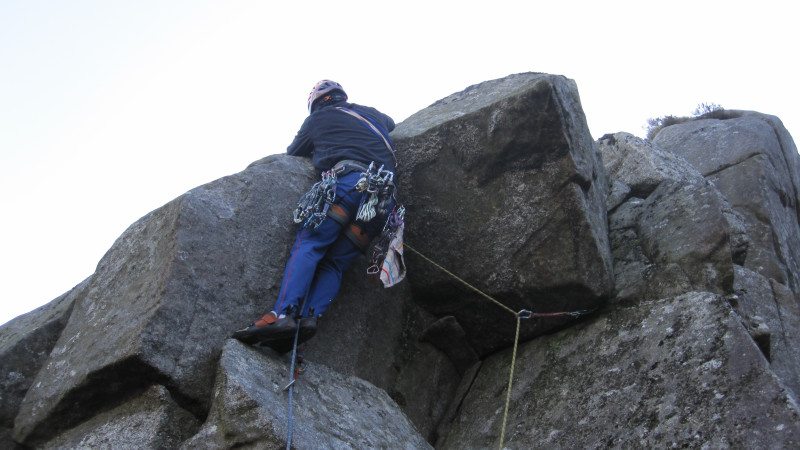 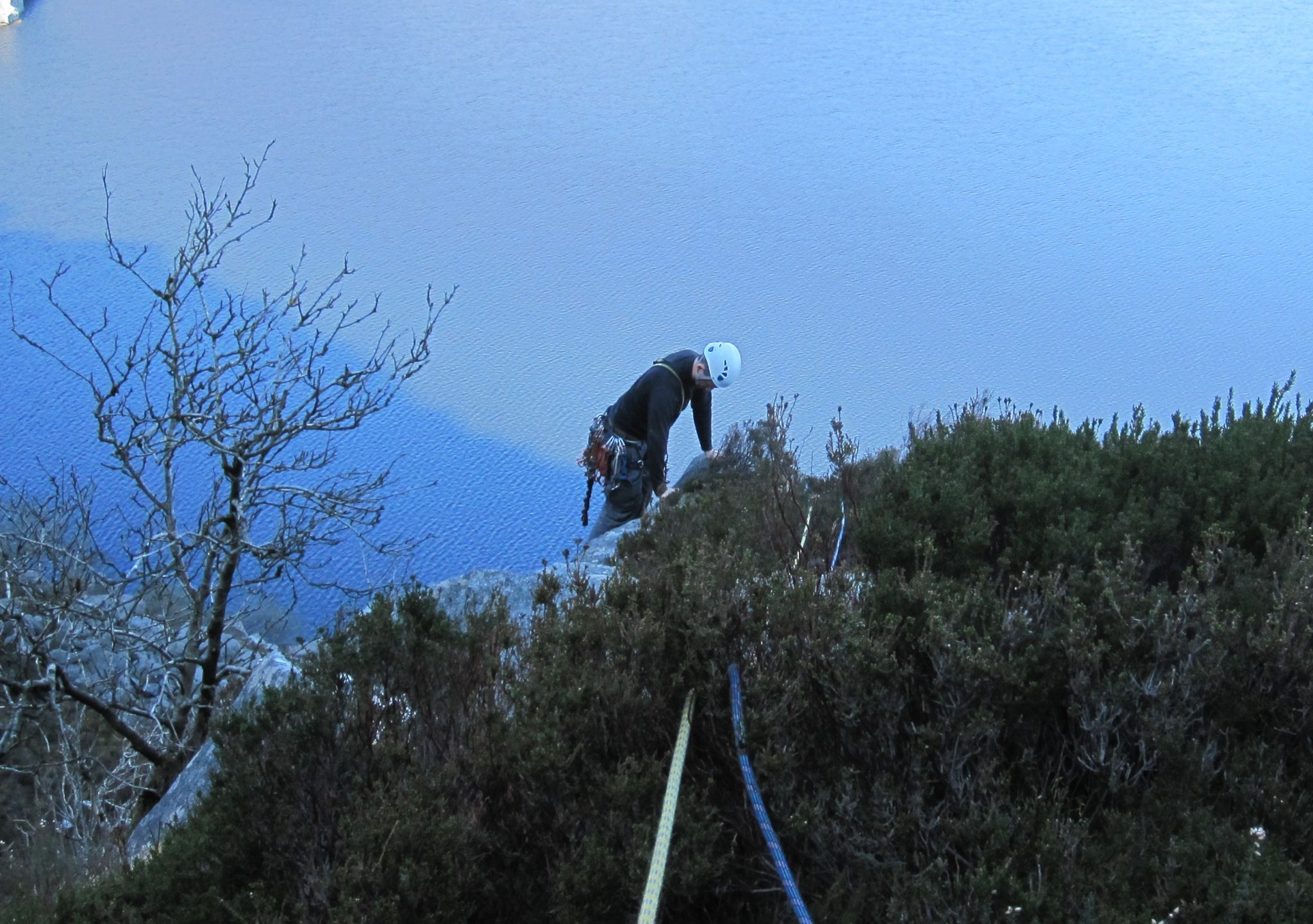 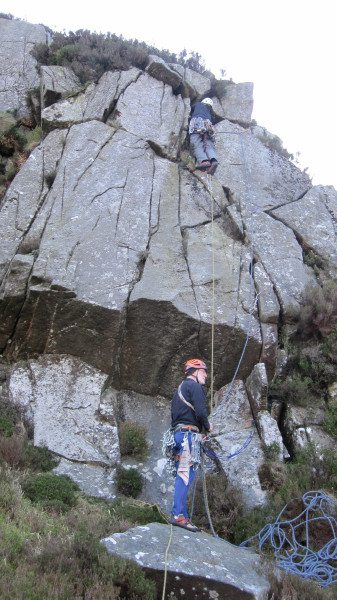 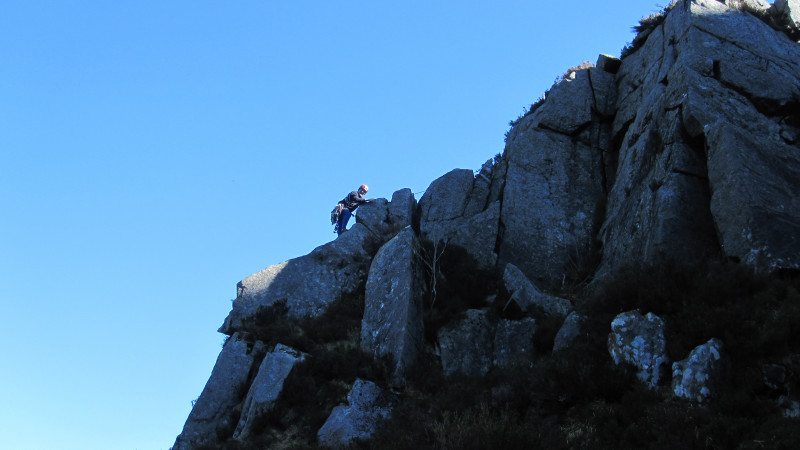 A couple of months later Joe and I climbed the left-hand leg, to give The Old Curiosity VS, consisting of 3 pitches plus a bit of scrambling between the 2nd and 3rd. Descent is via abseiling down the gully on the right of the buttress, utilising the rowan trees as anchors. 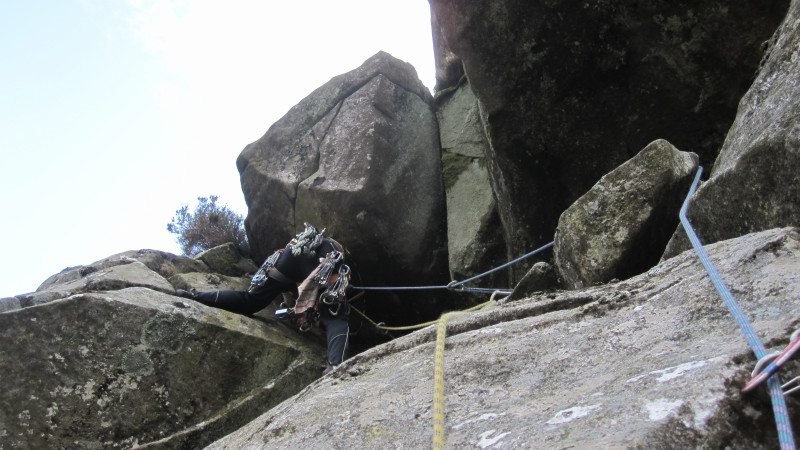 Joe on pulling onto crest of slab P1., The Old Curiosity. 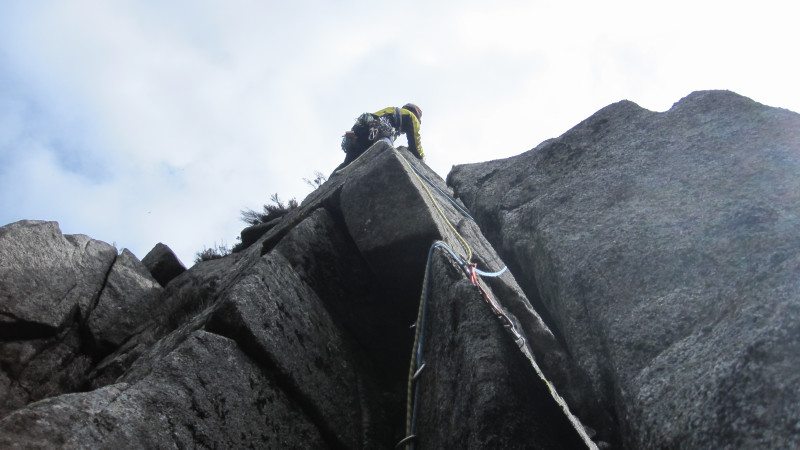 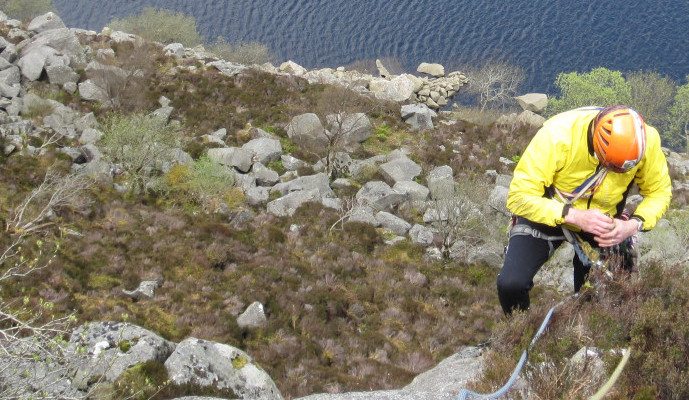 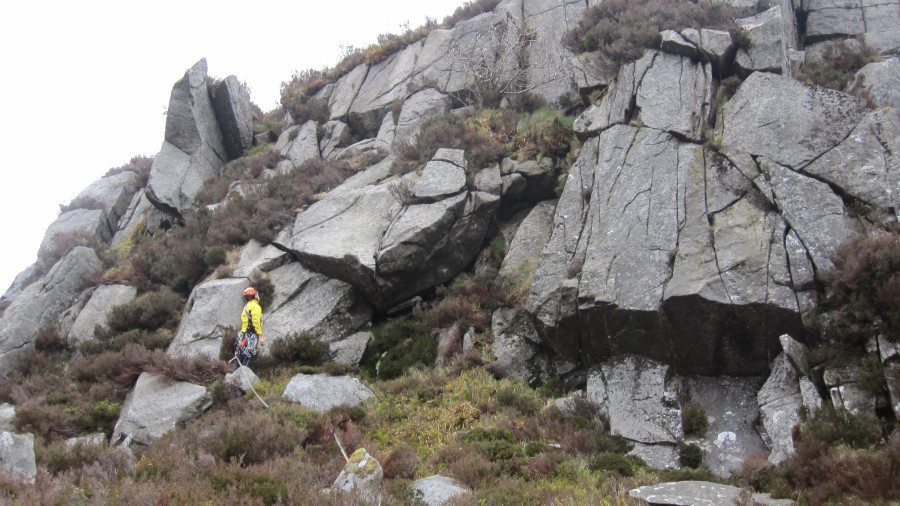 View of upper buttress. The intention was to take a line up the slab above Joe, but the cracks were full of wet gunge. 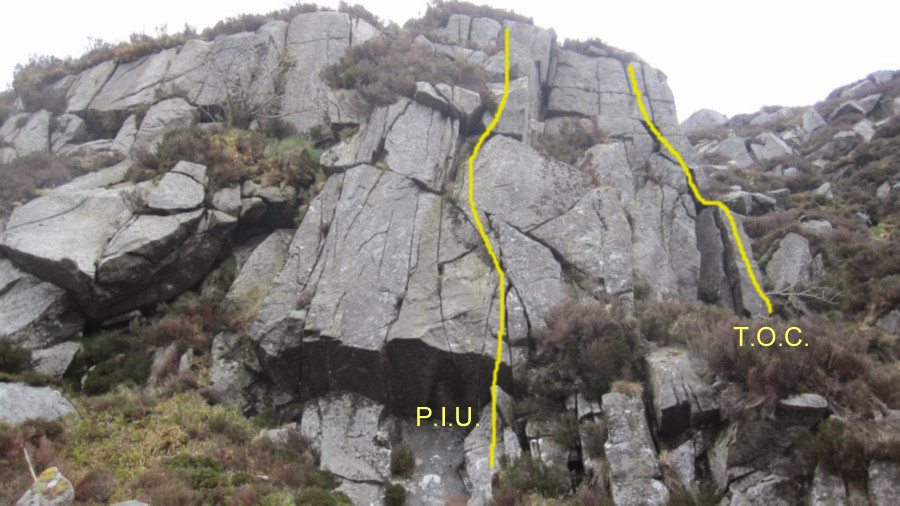