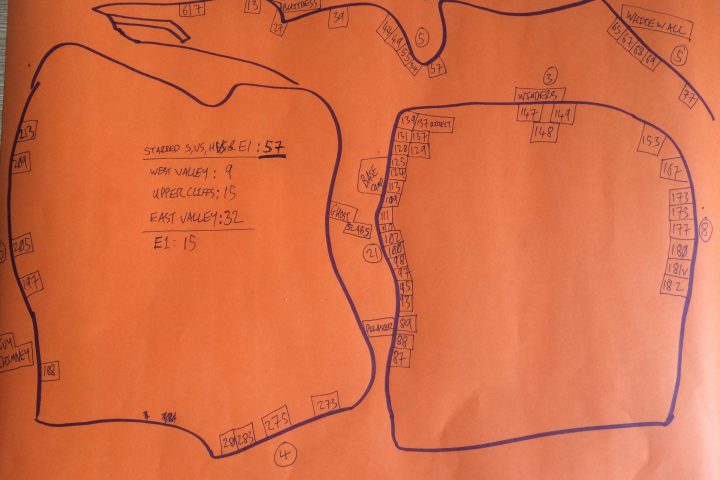 “People on the outside who either don’t do our sport, or don’t do it to the same level, look at the things we do and put an impossibility label on it. But really what we’re doing is trying to find things that are on the margins of what is possible for us” Tom Randall, No Sleep Till Bakewell, 2015.

In early 2015 Mick Savage and I were at Awesome Walls in Finglas, Dublin, and realised we were both going to be 40 that year.  I remembered some challenge someone did somewhere doing a number of somethings in a day, on some significant birthday. I had also just seen the Wideboyz Eastern and Western Grit challenge short film, and next time we were at Awesome Walls said “Howabout we do 40 Severes in Dalkey in a day as we’re both 40 this year? Mick was up for it and so began a year or so of preparation. We loosely agreed it was 40 within a 24-hour period but didn’t get much more into the logistics. Both are busy working Dads and we do not manage many trad climbing sessions together – it was easier for me to get down to Dalkey on a weekday evening than for Mick who generally works late so I drew a map and went through the guide to create the Severe graded list; the guidebook starts at VS.

“Why Severes? Why not 40 E routes? ” Dave Ayton asked, with a smile – we were looking for advice and had heard Dave had climbed some high volume of routes in a day in Dalkey.

My climbing career has been chequered and though I got out a lot between 2000 – 2003 in England and Wales I have had many years since with no trad climbing, only getting out regularly again in 2014. This Dalkey 40 project was partly to give a structure to my climbing – some purpose helps me focus. So at the start of 2013 I was falling off Severes and in 2014 I had consolidated VS confidence, but for a speed climbing endurance challenge I felt sure I needed to pick a grade we could lead comfortably at volume.  Mick was in a similar position with trad confidence despite climbing way harder than me indoors so we thought if I focus on the trad craft and preparation the two of us would balance out for the event.

I got 23 routes recced in 2015 and my first HVS routes and by the end of the season my first two E1s – delighted to say the least. Massively helped by reading the Rock Warriors Way and applying the concepts in my mental training.

It had dawned on me quite quickly that strictly sticking to Severes as a rule for the challenge was going to end up with us doing some fairly dull routes. As my confidence went up I broadened the scope to starred VS and HVS routes. By mid 2016 I had recced 30 more routes and we had enough that would work for the challenge, so we picked a date in mid September and got a couple of training sessions in together. Other physical training and some research on endurance nutrition was also in the mix. 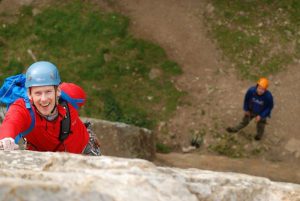 We realised we would be spurred on by some external purpose than this arbitrary number 40 so decided to get sponsored and raise some money for the Down Syndrome Centre, who are a great help to my eldest son as well as lots of other children with Down Syndrome. This also stopped us being able to wriggle out of the commitment! It dawned on us just before we launched our Everyday Heroes page that we may have an issue with donations if we did not hit the 40 so dubbed it a “Climbing Marathon” rather than “the Dalkey 40”, which did sound a bit like a wrongfully imprisoned band of activists. 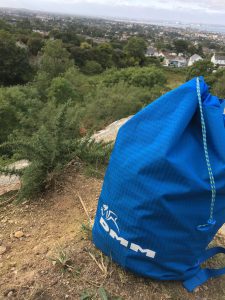 A number of people were very generous with offers of help – moral support and photography on the day, lending climbing gear, wives and children with giving us time to train and loads of friends and family were kind with donations. We had 2 grand collected and JCs Supermarket contributed another grand via their Making a Difference campaign – so with €3,000 of support the pressure was on!

1. No soloing – neither of us are into the risk level of soloing

2. No top roping. All trad and routes to be climbed ground up

3. Sensible amounts of gear placements – we were aiming for     fast but safe.

4. Try to use cams wherever possible, for speed of cleaning as much as placing.

5. As many routes as possible within 24 hours, pre-rigging of top anchors allowed before starting the clock.

Suddenly it was 16th September, the day before the challenge, felt very real, and the weather forecast was good – various last minute texts: “Do we need glow sticks?” “What time shall we leave?” “What routes can we really climb in the dark?”

Full of great intentions about getting a super early night I hit the hay two hours later than planned at 22:30, alarm set for 2:45, car packed apart from the food in the fridge.

We had planned a rigging phase in the dark – worked out we could pre-rig a number of anchors safely by headtorch – the most westerly routes between Jameson 10 and Dirty Dick, and then round to the easterly routes of the west valley, as well as three ab ropes, one each on Paradise Lost, Jameson 10 and Yorkshire Pudding.

The rigging went slower than we had hoped but was well worth doing as it sped us up later when we were tired.

We went in with a light rigging kit first, then came back for the rest of the climbing gear and the day’s food. Eating a reasonable breakfast we were geared up and ready to start the clock … and the climbing!

by headtorch, the dawn breaking through above us and the birds not yet awake

Topping out to see a fantastic sunrise gave a really optimistic boost to our psyche level. 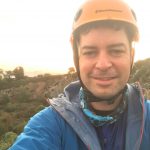 Using the two pre-rigged ab ropes worked well for these. Then down to the beginning of the easternmost routes in the West Valley:

Mick led Mahjongg and while belaying him I heard rustling near the bags. Looking across I spied three Magpies lashing into my food bag! Short of things to throw at them I tried shouting but they were seriously persistent. Luckily they didn’t break through the Tupperware and steal my stir fry.

09:30 After this route we headed over to Jameson 10 to make use of all our early rigging and get a good number of routes racked up nice and close together

We were on great form, warmed up well and the system was working – leader carrying the rope bag and coiling it in while the second climbs up. Second racing down as soon as untied while the leader strips the anchors.

We remembered to eat some of Auntie Jessie’s excellent fruit cake:

Over to the other side of the West valley for:

This is the point I regret going off plan. We had discussed our approach a lot before the event and in the pub in comfort it made sense to say ” no on sighting on the day “; only climb what we had done before, no surprises or new ground should mean greater speed. In our training session I had led Scavenger / Exertion –  the variation designed partly to make the route more interesting. Replace the lower quality Exertion start with the exceptional Scavenger start and avoid the run out Scavenger finish with the excitement and good protection of the Exertion finish. Indeed, as I weighed up the top pitch of Scavenger, in the training run, it looked devoid of gear, and I headed straight for my onsight of the crux of Exertion.

On the day, however, with adrenaline at a premium, the prize beckoned

“We’re on route 12. If I do Scavenger, Mick does Exertion, we are one ahead of the plan”

Knowing we were a little behind on time I looked at Exertion, then stepped left to take another good look at the fall consequence and holds on the Scavenger finish. “I’ll just make a move up and see what the holds like like”. It was all there, I was in some kind of flow state, the holds were great, the sun was out, suddenly I was at the top – a nice bit of on sight to add to the day’s successes.

What I had not really considered was that this added an on sight for Mick, the first section of Exertion neither of us had done. The second section Mick had seconded in training but not led for a few years.

Though neither of us realised it at the time, we had not been eating. We had bags of food in the base camp but we were carried away with the task – had not been drinking much water either. I think the last decent food  was Auntie Jessie’s fruit cake at the bottom of Superette. That was at 10:30. So apart from the odd energy bar and handful of nuts we had not been re-fuelling.

So Mick led the first section well though it is off-balance, then got to the big top crack and put gear in. As he climbed to the crux the awkward finish got the better of him and he fell about 3 metres onto the ledge below, the gear held and reduced the impact – a controlled fall, thankfully no injury. This happened once more, then got back on it again with different gear placements and finished it, pumped!

That fall took its toll on our psyche and with the lack of food we realised we needed a break. We ate and recharged, giving ourselves a good hour, then got back on:

19.  Honeypot Crack which was where I slammed into the fatigue – it felt really hard, like an E1. The plan was always to finish on easier ground, so as Mick led it earlier, I did

then decided to finish with

21. Winders Crack, though a Diff and not on plan, I reasoned we were exhausted, it was dark and we could sail up it to finish – we had an anchor sat there waiting for us at the top. Got to the base and flicked the headtorch light across the rock – the crack was sopping wet! It had not rained at all and for a minute we could not understand where the water was coming from, til it dawned on us the water was within the rock and seeping outwards…

So the “easy finish” turned into teetering up a sopping crack with gingery, slippery footwork. Bomber gear though 😀

20:45 we finish climbing, fatigued but elated

21:45 all abseil ropes and anchors de-rigged and heading back to the car 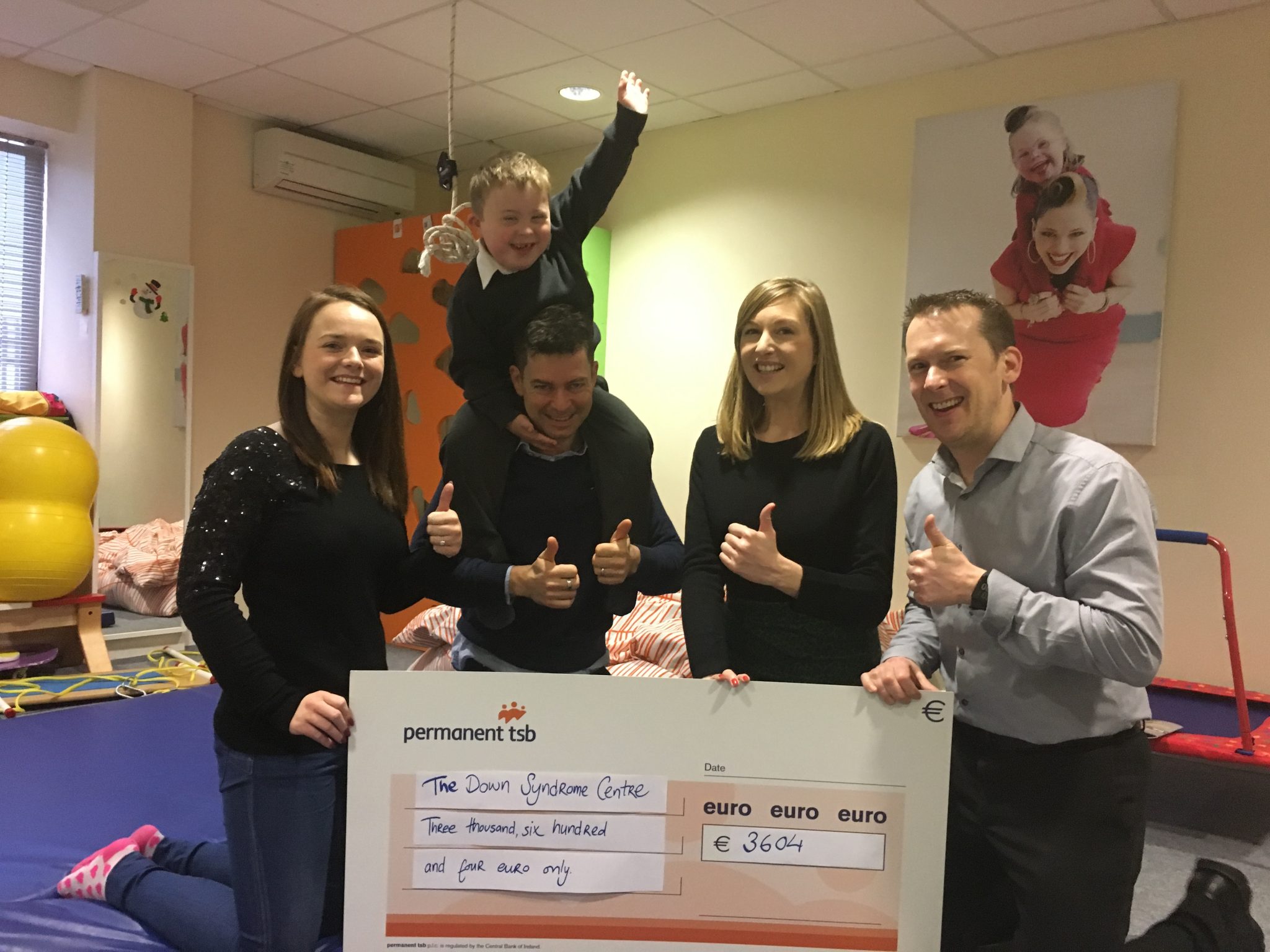 Massive thanks to all who donated! The money has been spent on the Occupational Health service delivery.

We worked out we climbed 320 metres of rock.